Some call it ‘bar dice,’ others refer to it as ‘Battleship’ or even plain, old 6-5-4, but we know it -and love it- best as the classic Ship, Captain, and Crew.

Whatever you call it, there’s no denying that it’s among the very best dice games for players of all ages and abilities, proving to be just as fun when you’re playing for stakes over a few beers with your friends as it is for keeping the kids entertained with nothing more than a handful of dice.

In today’s guide, we’ll show you exactly how to play the ship, captain, and crew dice game, talking you step-by-step through the entire process and explaining everything you need to enjoy this simple yet hugely entertaining game.

How to Play the Ship, Captain and Crew Dice Game 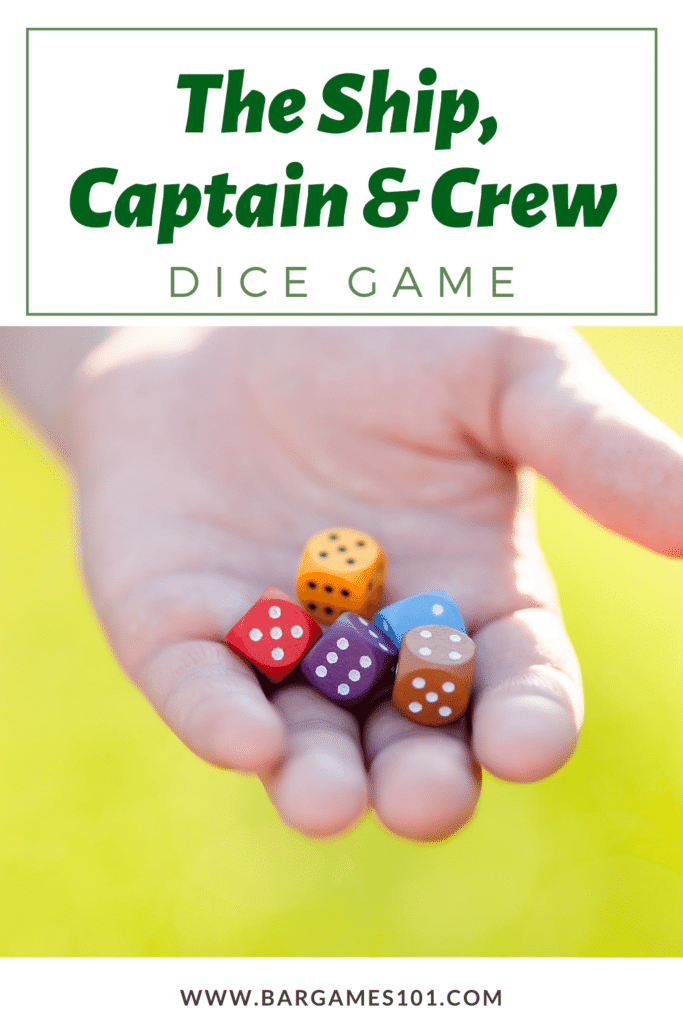 The objective of Ship, Captain, and Crew is pretty simple:

Get a ship, a captain, and a crew by rolling a 6, 5, and 4 respectively. The two dice which remain are your cargo, and the player with the most cargo (the highest score from the two dice) wins the round.

How Many People Can Play?

Although it’s technically possible to play with just two players, you’ll find it much more rewarding to play with at least 4 friends, if not more. Unlike some games that can just become too overwhelmingly complicated and time-consuming when too many people are involved, playing Ship, Captain, and Crew is a classic case of ‘the more the merrier.’

This makes a great choice for breaking out at parties, or even just for those rainy weekends when you and the family are stuck indoors.

With your friends and family all ready to play, you’ll need the following items:

Realistically, you’ll be able to play with any 5 dice you have lying around, though if you’re buying a set for the purpose of playing games like this one, opting for something like this Magic Vosom Felt Lined Professional Dice Cup with 5 Dice means you and your fellow players will find it easier to keep all those dice together. 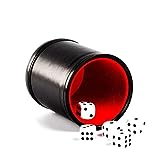 If you’re playing for stakes, then you might also want to get a good pack of poker chips, though honestly, you could use anything from coins to cookies for this.

Alternatively, if you’re playing Ship, Captain, & Crew as a fun drinking game, you could always change the rules so that the player with the lowest score has to down a shot, or something to that effect.

The Rules of Ship, Captain, and Crew

First things first, determine who goes first by having each player roll three dice. The player who scores the highest goes first, with the second-highest player taking the next turn and so on.

From there, the rules are pretty straight forward:

A player starts by throwing all five dice.

If you get one or more of the required numbers, you set those aside and roll your remaining dice.

For example, if you take your first throw and get a 6, you’ve scored your ship and can set it aside.

Then, if you land a 5 on your second throw, you can set your captain aside and finally, if you then score a 4 in your third throw, you’ve got all three and two dice remaining. These two remaining dice are your ago, and they determine your points.

One thing you can’t do is earn your ship, captain and crew out of order. For example, if you took your first throw and landed a 5 and 4, they wouldn’t count. You’d have to put them back and roll again until you got a 6.

How to Win at Ship, Captain, and Crew

Once you’ve earned your ship, captain, and crew by throwing a 6, 5, and 4 respectively, you can then start to earn points according to how much cargo you have.

Cargo is the term given to points on the remaining two dice.

Yet because each player has three throws, you could throw the remaining two ‘cargo’ dice twice more, and add those points to your total.

As with other popular dice games like Shut The Box, the aim of the game is to get the most points in a single round and be declared the winner.

If you’re playing for stakes, then the winning player gets the entire pot.

If you’re playing as a drinking game, everyone except the winner drinks. If you really want to make things interesting, you could even set the rule that the winner gets to decide which drinks the losers have to down.

If all this is still sounding a little confusing, don’t worry, you’ll soon get the hang of it. To help you understand how it works, here’s an example of a full round played with three people.

On their second throw, they land a 6 and a 5, so they have their ship and captain.

On their third throw, they get their crew by throwing a four.

On their first throw, Player 2 lands a ship and a captain.

On their second throw, they need a four but fail to get to one.

Player three lands none of the required numbers on their first score.

The same thing happens on their third throw so they get no points.

In this case, Player 2 is the winner.

What Happens in the Result of a Tie?

If the scores are even, then all the players who are tied simply roll again, this time using all of the dice as cargo.

The person with the highest score after this bonus round wins, unless it’s a tie again in which case the process is repeated until there’s a clear winner.

If you’re well into your 100th round of the game and looking to change things up a little, there are, of course, a number of different variations on this classic game.

This is basically the same game you’re used to, played with the opposite numbers. In other words, instead of the ship, captain, and crew being represented by the numbers 4,5, and 6, they’re represented by 1,2, and 3.

Though it may only be a minor tweak to the existing rules, this one can make things pretty interesting.

In the normal game, players can choose to roll their cargo dice again if they have another throw available. However, if they choose to do so, they have to roll both dice.

In this variation, players can choose to stick with one cargo dice and just roll the other.

For example, if a player’s cargo dice land on a 6 and 2, they could choose to keep the 6 and re-throw the 2.

This is another little fun tweak of the rules in which a player’s score is bumped up according to how many throws they didn’t use.

For example, if a player’s first go lands them 6,5,4,6,6, they can choose to forgo their other two throws. That would make their original total 12 (6+6), plus an extra 2 points for the throws they didn’t use.

Alternatively, don’t forget that if you’ve already got those five dice then you’ve got everything you need for a good, old fashioned game of Yahtzee or other classic dice games.

As we said right at the top of this article, one of the things we love most about this game is how versatile it is.

If you’re looking for a quick, easy, and enjoyable bar game you can break out the next time you’re hanging out with your friends, then you really can’t go wrong with this one.

Yet that’s not to say your kids can’t enjoy it too. Strip out the more grown-up aspects (or maybe just play for cookies!), and what you’ve got is not only a fun way to help them boost their math skills, but also a great, nautical-themed game that’s sure to keep them entertained for hours.