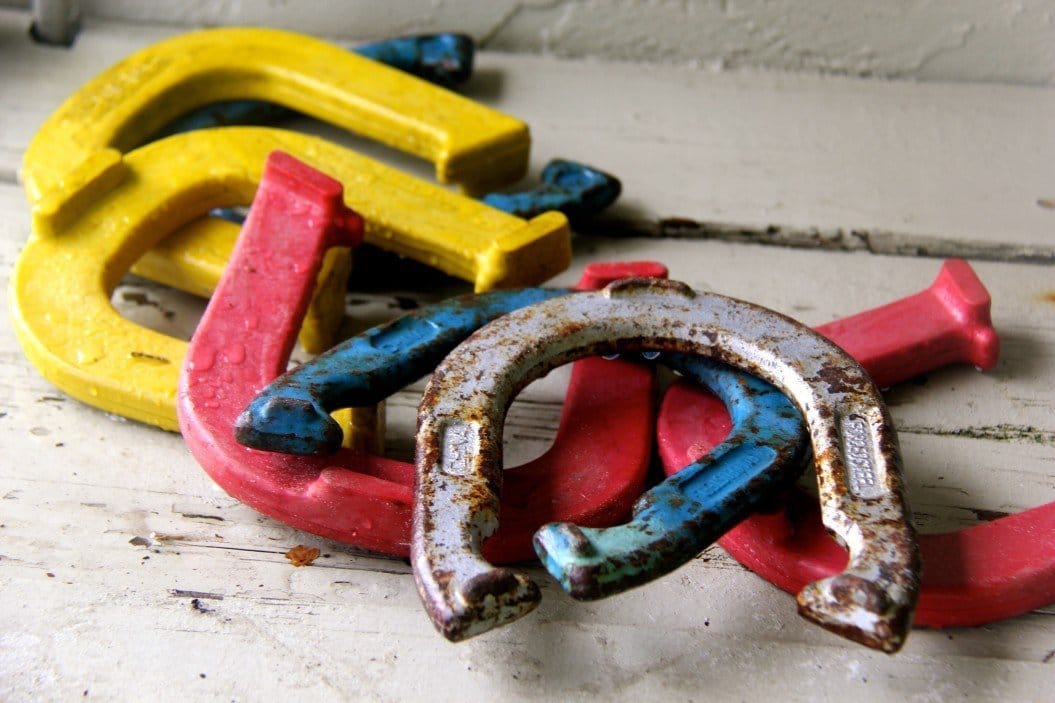 Here’s our complete overview of how to play horseshoes, a classic backyard game that never goes out of style.

Way before we had cornhole, there was a game known as horseshoe pitching.

We know it as horseshoes, a yard game that has been enjoyed for centuries and is ideal for casual family gatherings and serious competition.

It’s easy to set up, learn, and play with people of all ages.

So, how do you get started?

Between figuring out the correct specs for setting up the horseshoe pit, learning the rules, and knowing what equipment you need to buy, it can seem like a lot to learn.

The following guide is going to cover all of that information and more to ensure that you and your family or friends are ready for some fun-filled horseshoe games.

First, let’s talk about what the game actually entails before getting into the specifics.

What is the Game of Horseshoes? 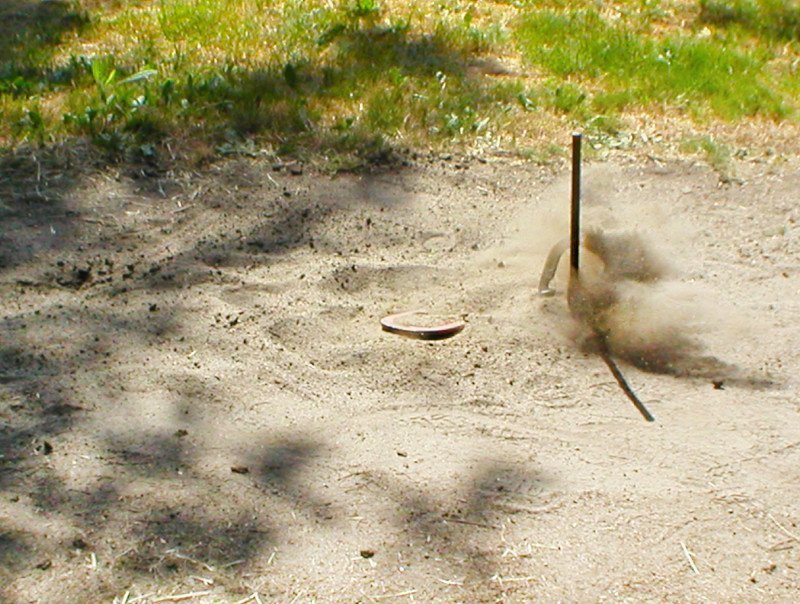 Simply put, horseshoes is an outdoor game that is played either between two individuals or teams of two people. The players or teams toss four horseshoes towards a stake in the ground to score points.

The players alternate turns and attempts to either throw a “ringer” circling around the stake or get it as close as possible to score.

While you may be picturing the game being played with actual horseshoes used on animals, a modern game will typically use a stylized U-shaped bar that is around twice the size of the average horseshoe.

You may be wondering how the game began and how it has progressed throughout history. So, before we get into the specifics on how to play horseshoes, here’s some background information on the wonderful game of horseshoes.

Looking for a new version of this classic game? Check out our guide to Polish Horseshoes (aka Beersbee).

The History of Horseshoes 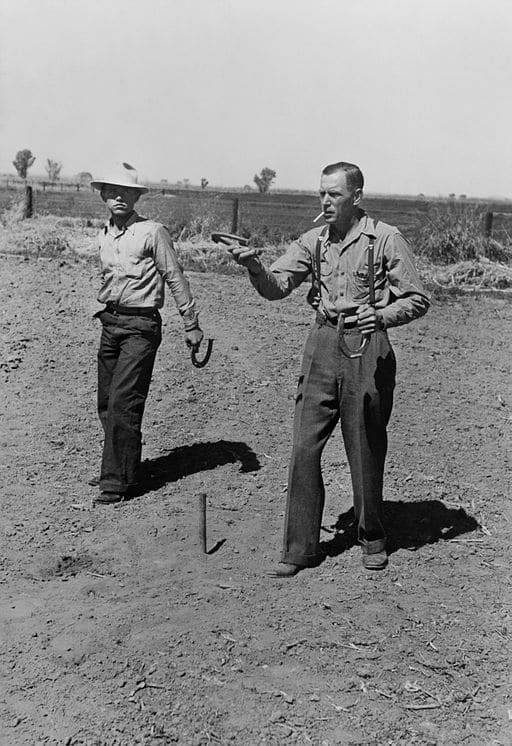 The game’s history started quite a long time ago.

Horseshoes is said to have its origins in quoits, which is a game that involved throwing a rubber or metal ring over a set distance to circle a pin.

It also may have evolved from the Greek game discus throwing, which was actually played in the Olympic Games.

Since plates and rings for horseshoes have been around as early as the second century B.C, historians believe that followers of the Grecian armies began playing the game with stakes and discarded shoes.

Horseshoes were fairly plentiful after this point in history, so the game seemed to pick up popularity among soldiers in many different wars.

Much later, in the year 1869, England created rules to go with the game of horseshoes.

At the time, the ground around the stake was clay, the distance between the stakes had to be 19 yards, and the players stood level with the stake to make their pitches.

Even with the addition of these rules, records and tournaments did not start for horseshoes until 1909.

The very first tournament was in Bronson, Kansas in 1910, and in 1911 new rules were implemented. The stake height was raised up to six inches and games were played to 21 points.

In 1914 the first organization came together to discuss the game; they were called the Grand League of the American Horseshoe Pitchers Association.

Through this organization, local leagues were started in many states and their rules were made standard across the world.

Over the last century, the rules have changed slightly.

The last official change, which consisted of making the game last for 40 points, was made on the first of January in 1982.

Now that you know the origins of horseshoes, let’s talk about the equipment you will need to start playing.

Before you begin setting up an area to play horseshoes, which will be discussed shortly, you should have a few different items.

You will, of course, need a set of four horseshoes, as well as two stakes.

Depending on how much you want to spend, there are many horseshoe game set varieties online of different styles, colors, and prices to choose from.

With a high-quality set of horseshoes, you’re generally looking for drop forged steel horseshoes that are powder coated with a non-slip grip.

The grip should be comfortable, durable and corrosion resistant. Some sets will have a color coating, while others will have a powder coating that retains the look of the metal.

Regulation horseshoes each weight 2 to 2.5 lbs and should have an opening no wider than 3.5 inches.

These things take a beating, so find a quality set that will hold up over the years.

Most horseshoe sets also come with a carrying case include two 24” stakes and (sometimes) a copy of the official rules.

The items can also be purchased separately as well if you don’t want to buy a set for the game.

Learn more about how to choose the best set of horseshoes. 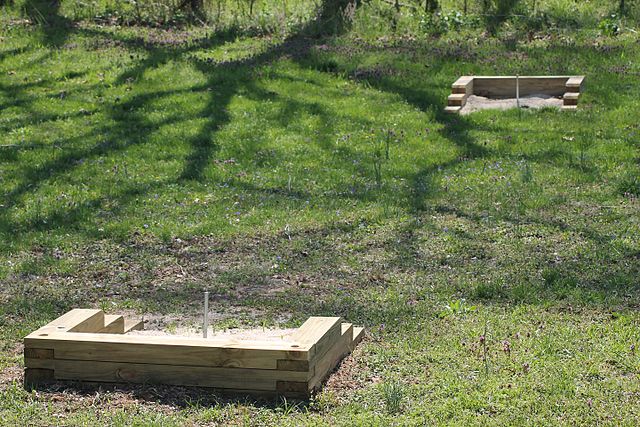 Once you have the necessary equipment, you will want to set up the game properly in your backyard.

While you are able to simply stick the stakes directly into level ground, having horseshoe pits is a popular option and is recommended for safety as well as a better game.

A horseshoe pit consists of creating a rectangular area of sand, dirt, or clay for each of the stakes to stand upright in.

The stakes need to be exactly 40-feet apart, per the rules, so you will need a lengthy space to set each pit up.

It’s recommended that you set aside a portion of your yard that is 6-feet wide and 48-feet long.

Inside the pitching box is the sand and stake, which is referred to as the pit.

The pitching box should have a border of wood planks to ensure that the sand or other grainy substance in the middle doesn’t spread across your lawn, and so it keeps its shape.

When you are ready to insert the stake into the sand, make sure it is angled forward by around 3-inches, and that it only protrudes between 14-15-inches from the top of the pit.

After the stake has been added to the area, make sure you fill the pit with the sand, clay, or dirt until it’s level with the wooden planks bordering the pitching box.

Why is Building a Designated Area to Play Important?

Again, if you are not interested in building your own horseshoe pits, you can always simply stick your stakes directly into your lawn.

However, keep in mind that the stakes will be less visible, making them easier to trip on, injure yourself with, or even hit with your mower.

It is especially risky to leave these metal stakes in the ground if you have small children around, as they are more susceptible to injury.

On top of the designated playing area being safer, it also makes the game significantly more enjoyable. 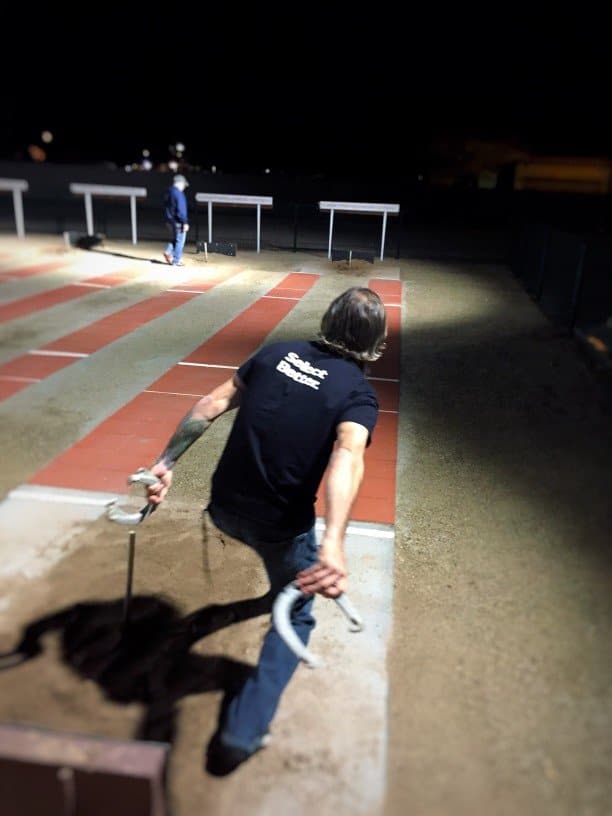 So, what are the rules of horseshoes?

How to Play Horseshoes: The Basic Rules

Learning the basics of how to play horseshoes is simple. As we discussed before, the object of the game is to toss the horseshoe so that it falls encircling the stake.

If it doesn’t land around it, ideally it would then land within 6-inches of it. 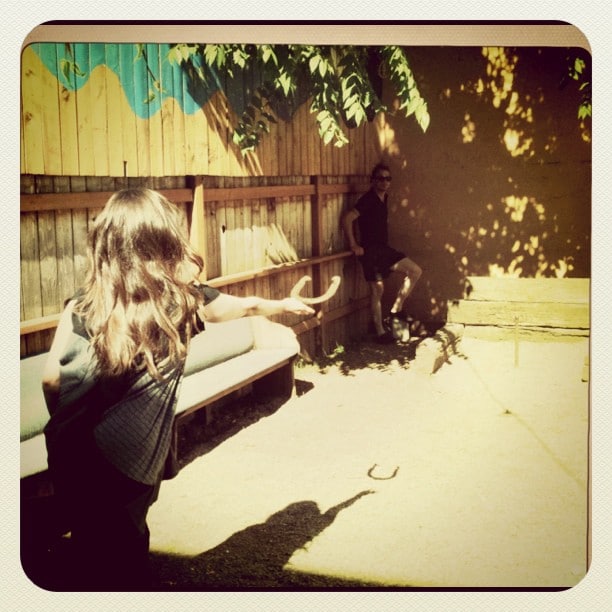 Here are some of the other basic rules you will need to know before playing.

Now let’s discuss how scoring works within the horseshoes rules.

For scoring, there are many aspects to consider, which can make the game slightly confusing at first.

Just make sure to keep the rules on hand until you become a more skilled player.

Here’s what you should know about keeping score during a game of horseshoes.

With these rules, all points are counted. However, you can also play a game of horseshoes where the points of your opponent(s) can be canceled out.

If you are interested in making the game a little more competitive, consider playing horseshoes with the cancellation scoring rules.

With the cancellation rules, you score points exactly as you would in the count-all rules we just discussed.

However, by pitching the same exact game as your opponent, you can cancel out their points.

For example, if the other player or team throws a ringer and scores 3 points, you can attempt to do the same and cancel out the points they would have earned if you succeed.

If this is successful, it is referred to as a “dead ringer.”

These rules also apply to shoes within 6-inches of the stake and leaners as well.

How to Play Horseshoes: Making the Most Out of the Game

Now armed with this information, you are ready to start playing the game of horseshoes.

The game is a great way to bring people together during a barbeque or other outdoor gathering, especially if you’re equipped with the items and knowledge you need.

Make sure to also take the safety information regarding the rules and set up to heart, as it’s vitally important to keep all of the players and surrounding adults and children safe in the process.

As you get started, what aspects of the setup and the game are the most exciting to you?

Are you planning to build your own custom set or buy one online?