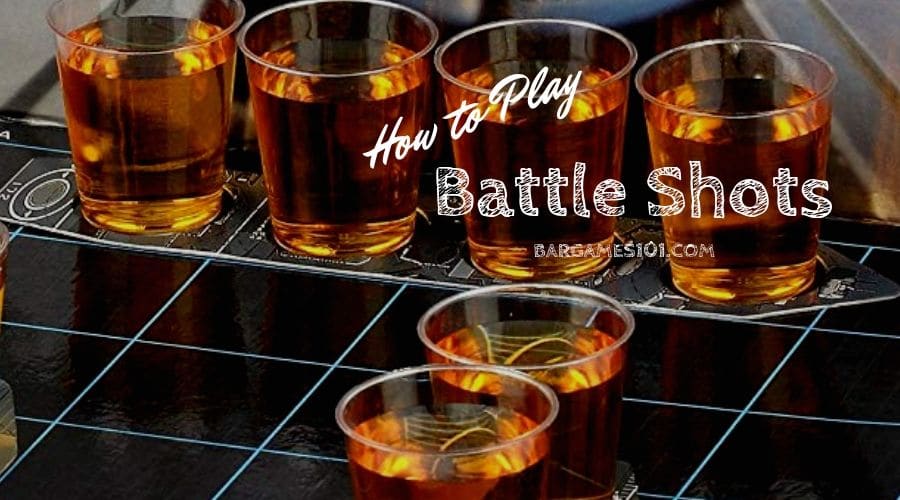 Everyone loves DIY drinking games, especially one with a bit of nostalgia thrown in.

If you are looking for a new game to play with friends and family (over the age of 21 of course), then Battle Shots is definitely one to try out.

Let’s get into what the game actually is, the rules and equipment needed, and how to play Battle Shots.

What is Battle Shots?

So, what is Battle Shots?

Remember the game Battleship from your childhood?

It’s the same idea, but with drinking.

Instead of ships, you secretly arrange your shots on the board – each ship is a designated number of shots in a row. 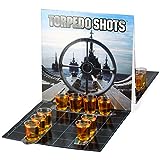 For example, your submarine would consist of one shot glass, the destroyers are two shot glasses, and the battleship would be three.

Typically, the game would take around 30 minutes to play.

However, this, of course, will probably depend on how much you and the other players have had to drink.

Also keep in mind that as you play the game, you will have to take the shots that your opponent guesses on your board, so don’t drink too much before starting the game.

Now let’s get into the Battle Shots rules.

To decide who goes first in the game of Battle Shots, a coin is flipped.

Then, just like in the game of Battleship, the person going first calls out coordinates where they think the other player has positioned one of their “ships.”

Each time someone makes a guess, mark your coordinate map or a piece of paper. The markings should be different depending on if the turn is a hit or a miss.

If someone hits a ship on their opponent’s board, they have to drink the shot from that designated spot.

So, if you call out C6, and the other person playing has a ship there, they would take the shot.

If the guess is a miss, nothing happens except for the sheet being marked, and the game continues.

You definitely want to make sure that every guess is being marked on a sheet; otherwise, the same locations may be called out twice, especially as more and more shots are being taken throughout the course of the game.

Just like in Battleship, the goal is to sink all of the opponent’s ships.

In Battle Shots, the loser in the game will have consumed all of the alcohol on their board when all of their ships have been taken down.

When a ship has been sunk, the player with the boat must point out that it’s been sunk, so the other person knows to guess a different location on the board.

You can also really make the game your own.

If you would prefer to stray from the traditional Battleship rules, you can make the ships as long as you want, add in additional players, switch out the shots for other drinks, etc.

The rules for this DIY drinking game are not very strict, just make sure you are having a good time with it.

When it comes to the equipment needed to play Battle Shots, the options are truly endless.

If you are on the crafty side, you can build the board and pieces yourself, or even just use odds and ends around the house.

There are also many different options for purchasing Battle Shots online (affiliate link).

Essentially, you and the other player(s) will need a Battle Shot board, whether it is from a store, handmade, or even a few old pizza boxes with gridlines drawn on with Sharpie.

If you remember the Battleship board, both you and your opponent have privacy screens that also serve as a place to mark where you have attempted to hit a ship.

In addition to a board, you will also need at least 12 shot glasses, maybe more depending on how lengthy you make your ships.

Lastly, you will need alcohol.

There’s no set rule on what you have to drink when playing Battle Shots, so choose your favorite beer or liquor and then get to playing.

How to Play Battle Shots: Step by Step

Now that you have the proper setup and know the rules of the game, it’s time to learn how to play Battle Shots.

Here’s a step-by-step guide to ensure learning the game is as easy as possible.

Sit across from your opponent so that neither of you can see each other’s board.

Lay your board down facing yourself, and then attach the privacy screen to the shot board with the coordinate map facing towards you as well.

The set up should be in an L-shape, like a Battleship board. Make sure that your opponent has the same set up as well.

2. Arrange Your Ships in Secret

Once the boards are both properly arranged, put your Battle Shots on the board in any arrangement that you would like.

As stated before, if you are playing with the standard Battleship rules, a battleship is three shot glasses, destroyers are two, and the submarine is one.

However, you can get creative with the names and sizes of your ships if you would prefer.

Do not tell your opponent where your ships are located, and make sure they don’t voice their positions either.

Once all the shots are on the board, the game can officially begin.

3. Find Out Who Goes First

The Battle Shots rules indicate that a coin flip is necessary to decide who is going to go first. Ask your opponent to choose heads or tails, and then the person who wins can take the initial turn.

When your turn comes around, call out the location where you believe an enemy ship is positioned. For example, A5, D7, etc.

Track your guesses, whether they are hits and misses, on your coordinate map to make sure that you aren’t repeating guesses. Use an X for a hit, and an O for a miss.

5. What to Do When a Hit Occurs

When you correctly guess the location of one of your opponent’s shot glasses, they have to take the shot. The main goal is to have the other player take all of their shots before you take yours.

6. What to Do When a Miss Occurs

For missed guesses, no shots are taken. Instead, just mark the board and move on to the next player.

7. Sink all the Battle Shots

The loser of the game is the one who has no shots left to drink. They then have to take the rest of the remaining shots from the other side of the board as well.

Get Your Shot Glasses Ready; It’s Time to Play

Now that you have the rules, equipment, and steps in mind, it’s time to break out those shot glasses and get a game started with family and/or friends.

Also, for you and the other player’s safety, please ensure that all participants are over 21 years old.

If you want a child-friendly version, just play with soda or grape juice.

Adding this to your drinking game list is sure to get your guests talking.

So, grab your favorite adult beverage and start sending out invites.