In this post, we’ll cover what you need to know to learn how to play Cribbage.

The game of cribbage was described in texts dating back to to 1630 (more on its history at the end), and it’s still very popular. In fact, it’s played by an estimated 10 million people across the United States, and many more worldwide.

How to Play Cribbage: An Overview of the Game 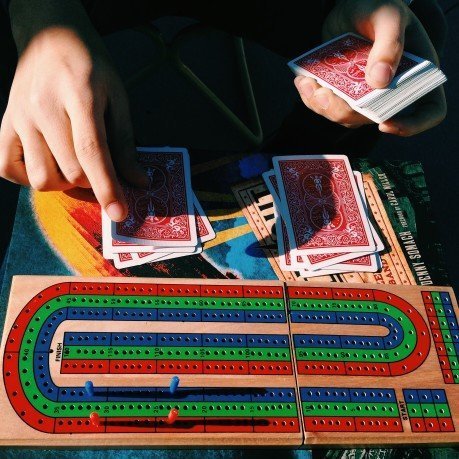 The goal of Cribbage is to be the first player to score 121 points. Players score points based on the cards they hold in their hands as well as the choices they make while playing each turn.

The Number of Players

Most people play Cribbage as a head-to-head game, but any number from two to four players can play.

While most of the rules, including gameplay, the objective, and scoring, are the same, there are differences when it comes to the number of cards dealt to each player.

The rules in the main section of this article are for a two-player card game. Check out the Other Variations section at the end of this article for more in-depth information for playing with three or four players.

The equipment for Cribbage is a standard deck of 52 playing cards and a way to keep score. Most players use a specialized cribbage board which has two to four tracks of numbered holes.

Because scoring occurs both during gameplay and at the end of each hand, it is easy to become confused. Most players use two pegs on a specially designed board to help them keep track of their current score. The rear peg represents the previous score from last round while the forward peg is the player’s current score.

Setting Up a Game of Cribbage

The set-up for the game is simple. Start by placing the board between both players. Since each player will need to score by himself, make sure the board is within easy reach.

Each player places his pegs in the starting area on the board.

To determine who will deal the first, shuffle the deck, and have each of the players select a card. The player who drew the lowest card must deal first. If both players draw the same rank, each player needs to draw again.

The dealer shuffles the deck and then offers his opponent the chance to cut the cards. After the cut, the dealer gives six cards to both players starting with the opponent. Each player then must choose two cards to place into the crib.

The crib is an additional hand which may score points for the dealer at the end of each round.

After both players put two cards into the crib, it is set aside. The dealer then burns the top card of the undealt cards and turns the next card over. This is the starter card.

If the starter card is a Jack of any suit, the dealer immediately scores 2 points and moves his peg forward two holes.

The non-dealer goes first and lays down any card from his hand face up in front of him. He must announce the value of the card as he puts it down.

All numbered cards are worth their stated value: Aces are worth one, and all court cards (Jacks, Queens, and Kings) have a value of ten.

Next, it is the dealer’s turn to place a card face up in front of him. Again, as he puts the card down, he must say the total value of both played cards.

Play continues with each player alternately laying down a card and announcing the new total. If either player plays a card which brings the total exactly to 15, he says “two for fifteen” and gives himself two points.

Once this happens, his opponent immediately scores one point and must continue to lay down cards until he can no longer stay under the count of 31. At that point, the player who said, “Go” must start the count over.

Once both players are out of cards, it is time to score the hands.

The non-dealer scores first using the scoring method described below and immediately pegs his score.

If a player reaches a score of 121, the game immediately ends, and that player is the winner. This is true even if the opponent would have outscored him following his turn to count.

This ability to instantaneously win provides a slight advantage to the non-dealer to help offset the much larger dealer’s advantage of scoring additional points from the crib.

The deal continues to switch between both players until the end of the game.

When you learn how to play Cribbage, the rules for scoring may seem complex. This because not only are there multiple ways to earn points, but also because there are two separate parts of the scoring process.

One part of the scoring process takes place during gameplay while the other part only occurs once all the cards have been played.

Besides scoring points from 15s, 31s, ‘Go’s,’ and ‘Last Cards,’ as explained above, there are other ways players can earn points during gameplay.

Additional scoring options, including runs, pairs, and triples are based on the order all the cards are played.

That means if one player discards a ‘9’, the other player then can play a ‘9’ for a pair for two points.

But that leaves open the possibility for the first player to peg 6 points by tossing down a third ‘9’.

Here is a list of all the possible ways players can earn points during the gameplay:

Scoring at the End of Each Round 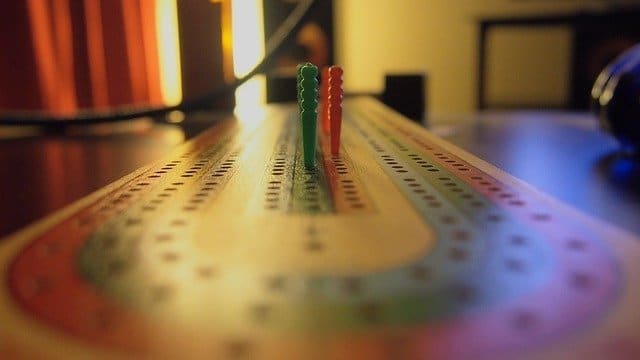 The non-dealer scores, and most importantly, pegs, first.

If the non-dealer reaches 121 points or more during the scoring process, the game is immediately over, and the player is declared the winner.

After the non-dealer scores, the dealer will score his own hand and then his crib.

According to the American Cribbage Congress players can score points after the end of the round in the following ways:

Strategies to Improve Your Cribbage Game

The highest amount of points you can score in a single hand of Cribbage is 29. Unfortunately, the odds of getting dealt the perfect hand is one in 216,580.

Luckily, you become an expert Cribbage player without ever getting a 29.

These are a few quick strategies you can use to improve your game.

Other Variants of Cribbage:

A Brief Background of Cribbage

We mentioned that this game has a long history, so here’s a little glimpse into the background of Cribbage.

With its rich history and language all its own, Cribbage has challenged the intellect of players from around the world with its wonderful mixture of luck and skill.

While many people claim Cribbage was developed by the poet, courtier, and all-around rake, Sir John Suckling, this is rather unlikely to be accurate.

What is more probable is that the Suckling, a well-known gambler, did little but standardize an already existing variation of an older card game called Noddy.

But what is confirmed by historians is that sometime in the 1630s, Suckling wrote a very popular book explaining the rules for Cribbage which became extremely popular in the UK, especially among the aristocrats.

Suckling wildly promoted the game, even going so far as to hand out decks of marked cards to wealthy families throughout Europe, only to show up months later for a game or two.

Sir John Suckling was able to win over 20,000 pounds (that is over 4 million pounds in today’s money) from these games.

And although many gamblers continue to make wager on Cribbage, it is one of those rarest games which is just as much fun to play with or without any stakes.

Whether you are an avid card player or only want to try out a new challenge, Cribbage is a great game to learn.

Once you get over the scoring system, you will find it perhaps one of the most entertaining head-to-head card games out there.