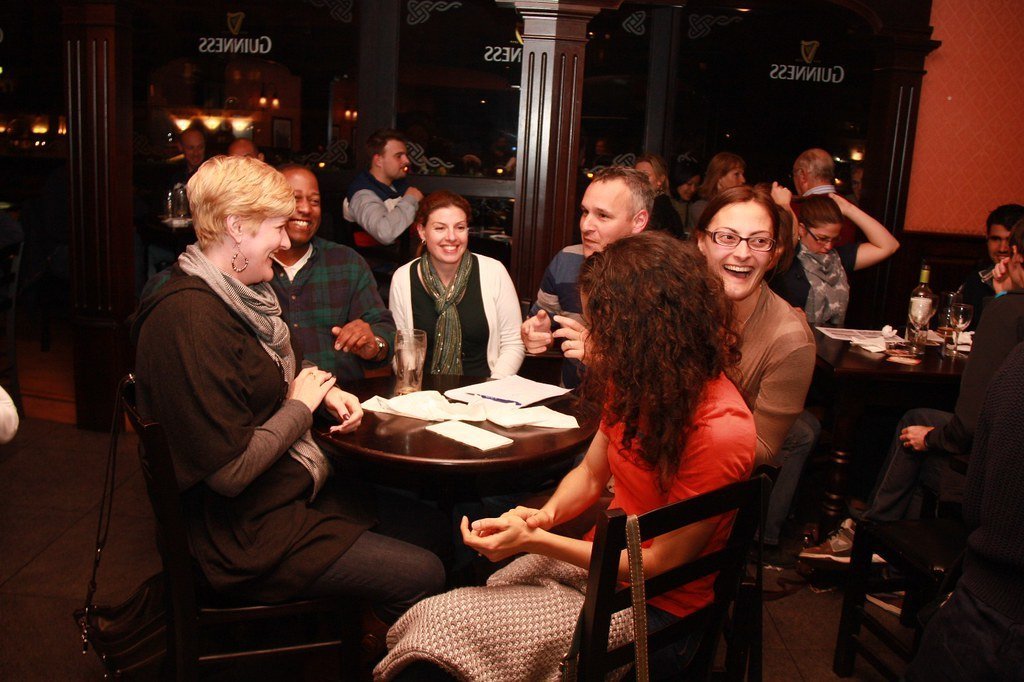 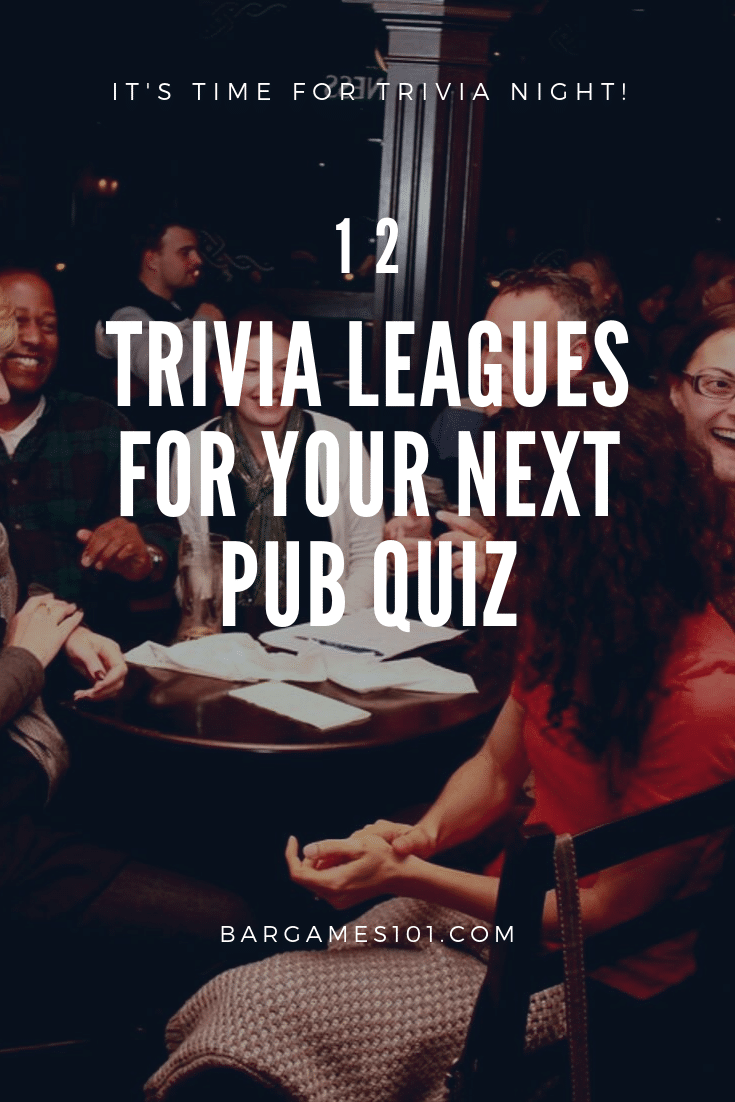 No matter where you live in the U.S., there is probably a pub quiz happening tonight at a local establishment. But how do find the best trivia leagues to join? The ones that are professionally managed, fun and competitive?

You can search online, or use a database like this one to locate your next trivia night.

But one of the best ways to find a high-quality, live hosted pub quiz is by checking with one of the many established bar trivia leagues located around the country.

These are well-run and managed trivia nights with professional hosts and a proven format to make your night fun, challenging and often hilarious.

So, if you’re looking for trivia night, we recommend starting with one of the following leagues to see if they host something in or near your hometown.

What to Know About Bar Trivia Leagues

Skip to the leagues

Many of these trivia leagues have their own sets of rules, unique hosting and question formats, and quiz topics.

But they all share a few rules in common.

In fact, the following rules are pretty much universal, no matter what league you’re playing in on trivia night:

Most leagues also have a maximum number of players. And while in some cases you can play solo, it’s always encouraged to join up with a team.

If you don’t have a team, joining one on trivia night can be a great way to meet some new people.

Many leagues have a limit of 6 or 7 players per team. Some allow up to 20. Just check on the league website or at the bar to confirm.

Here are 12 trivia leagues you should check out if you’re ready to add the pub quiz to the list of your favorite bar games.

Stump Trivia is a great live pub quiz option if you’re based in the northeast, especially in the Boston area.

But they also host over 400 events per week all over the country.

Their entertaining and knowledgeable hosts will challenge teams of up to 6 players with questions across a random set of topics, including literature, anatomy, movies, history, sports and more.

This trivia company was founded in 1999, so they’ve been doing this for a while.

To find a Stump Trivia at a bar near you, visit their website.

Game Time Trivia is one of the best trivia leagues based in the Northeast, with plenty of live hosted  pub quizzes at bars in New Hampshire, Massachusetts, and Maine.

Teams can form with 2 – 8 players. The rounds include a classic question round with additional picture, bonus, wager and music rounds.

Topics are diverse and may cover things like pop culture, sports, movies and music.

You can check them out here.

Pour House Trivia is based in the Mid-Atlantic region, hosting over 30 team trivia games per week across 75 different venues in the DC metro area.

With engaging trivia hosts and a mix of quality questions, they prefer no more than 7 players per team and offer games on Monday through Saturday night.

Check them out on Facebook and online at www.pourhousetrivia.com.

Last Call Trivia was formed in 2007 in Cincinnati and currently hosts weekly trivia nights in several locations across the Midwest.

Most of their pub quizzes take place in cities within Ohio and Kentucky, but they have a presence in OR (Portland), PA (Pittsburgh) and Tampa as well.

Trivia leagues last for 12 weeks, and teams must accumulate at least 6 scores over that period to be eligible for prize money.

Want to display your knowledge by answering a random assortment of questions across subjects like music, movies, TV, sports, and history?

Check out America’s Pub Quiz, which uses a classic pub style quiz format that lasts over 2 hours and allows teams with up to 20 players.

Teams compete against each other for the chance to earn an invite to a cash prize tournament at the end of the season.

Based in Minneapolis, Trivia Mafia hosts weekly live trivia in bars, restaurants and brewpubs throughout the great state of Minnesota, as well as locations in Nebraska, South and North Dakota, Wisconsin and Illinois.

Check them out here to find your next trivia night in the Midwest.

Sporcle is a huge crowd-sourced trivia platform that can be accessed via an app. But they also offer an expanding live trivia league that takes place in bars and venues in select cities in over 15 states.

Founded in 2007, this user-generated bar trivia engine fuels its league competition by offering over $50,000 in cash prizes to team participants.

Geeks Who Drink is a national live trivia company based in Denver. Modeled after the original pub quiz format popularized in the United Kingdom and Ireland, Geeks Who Drink hosts trivia nights at over 800 pubs across 46 states in the US.

Players can form teams of up to 6 people to compete in a relaxed but challenging game of trivia. These games last more than 2 hours and include a wide range of subjects delivered in different multimedia formats.

For example, you may encounter an audio ‘name that tune’ style question, or a sample from a movie or TV show to identify. The games include 8 rounds with 8 questions per round.

Learn more about Geeks Who Drink on their website.

If you’re based out west, especially in the Southern California region, definitely take a look at King Trivia for your next trivia night.

Founded in 2004, this trivia league hosts over 75 weekly shows in several cities across California cities as well as Seattle, Denver and Dallas.

Using a format that includes 7 rounds, with a picture round, “guess who” round, and general knowledge round, King Trivia has hosted over 30 thousand trivia nights for players who love answering questions about movies, sports, history, and a random assortment of questions across different topics.

The NC Trivia League is a fun trivia league based in New York City. Players can form live trivia teams of up to 6 players to compete in one of over 75 bars located throughout the city.

These games take place 7 nights a week, and you get to compete and match scores against all the teams playing at different venues around the city.

You can learn more about the NYC Trivia League here or find them on Facebook and Instagram.

Pub Trivia USA is a popular Chicago based trivia offering. They host trivia nights for teams of up to 6 players and organize the league structure based on the following areas in Chicago: Suburb North, Suburb South, Suburb West, and City.

If you live in Chicago, you can form or join a team, claim one of these locales as your home base, and compete against teams across the city.

You can learn more about Pub Trivia USA on their website, or check them out on Facebook.

Team Trivia was founded in the city of Atlanta over 20 years ago. Since then, they’ve expanded to become a large trivia network with hundreds of nightly shows in several cities across the country.

Their guidelines are pretty simple: show up with a team and play.

You can find a Team Trivia location here.

If you’re looking for trivia night, definitely check out one of these leagues.

Or, if you’d rather play at home, you can try out one of these fun trivia board games.