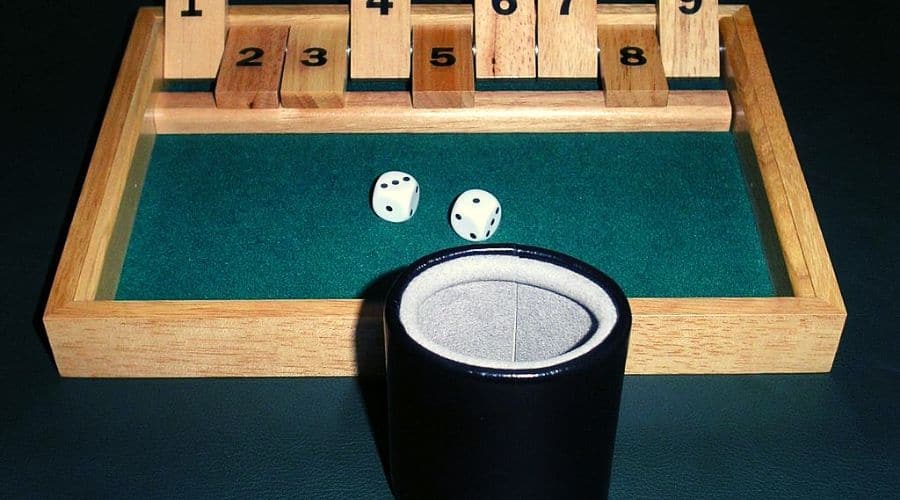 Shut the Box is a traditional dice game which combines a lot of luck with a bit of skill.

The game comes from Northern France and is known by a variety of names including Blitz, Canoga, Klakers, Jackpot, and Batten Down the Hatches.

Variations of the game have been played for well over a thousand years but the most common version people play today was popularized in the 1960’s in the pubs of Britain.

Shut the Box rules are easy to learn, the game is fast to play and exciting enough to keep everyone entertained while giving all players a fair shake at winning regardless of skill or sobriety. 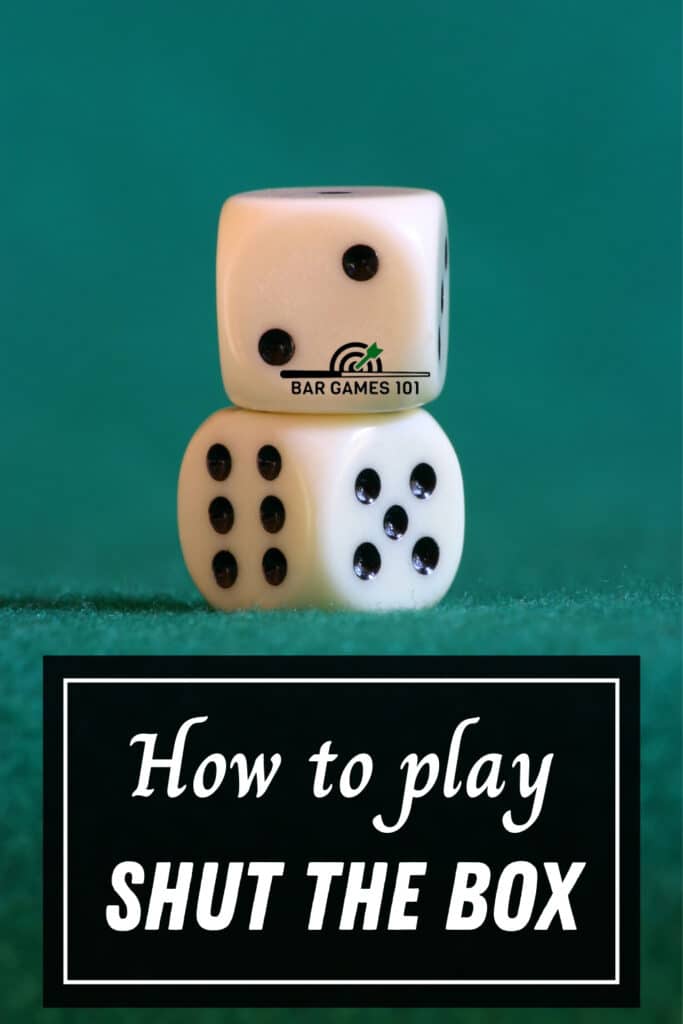 The goal of the game is simple: Each player tries to close the most numbers on a scorecard by rolling a pair of dice.

The only essential equipment when learning how to play Shut the Box is a pair of six-sided dice and a way to keep score.

Most players use a specially designed dice trays which have hinged scoring tiles with the numbers 1 to 9 printed on them in the standard version.

It doesn’t matter if you are using the 9-tile or 12-tile version, play and scoring is the same.

If you don’t have a dedicated Shut the Box dice tray, you can still play the game.

Popular alternative options for scoring include using a deck of cards or dominoes.

You can even use a piece of paper and a pencil in a pinch.

Other classic games you might want to check out:

– Traditional Pub Games
– The Basics of Backgammon (Strategy and Rules)

Setting up Shut the Box is easy. If you are using a dedicated dice tray with scoring tiles, just flip all of them up to show all the numbers.

Otherwise, use a scoring system of your choice to help you keep track of open and close numbers during the gameplay. 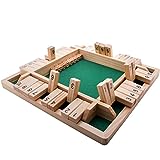 Here will breakdown how to play shut the box with an overview of the basic rules, including gameplay, scoring, and ways to play popular variants of the game.

In the standard version of the game, the active player starts his turn by rolling two dice.

The player then must choose any combination of open numbers which equals the total of the roll.

The same player continues to roll the dice and close numbers in the same way.

Many people play with the additional rule that when all open numbers are 6 or under, the player has the option to elect to roll a single die until the end of the round.

Once there are no combination of open numbers left equaling the roll, the active player’s turn is over. The combined sum of the open numbers is recorded.

Once the first player’s score is recorded, the next player resets the game and takes his turn.

Here’s a helpful video on how to play shut the box.

There are several ways to score Shut the Box. Each scoring method changes the playing strategy slightly.

This is the most straight-up way to determine the winner. The player with the lowest sum of open numbers wins the game.

If players are gambling, the difference between the two sums is the multiplier for how much the loser must pay the winner.

For example, if the losing player ended up with a score of 8 and the winner had 4, the loser must pay the winner four times the stake.

This game is another scoring variant popular when more than two people are playing.

The game of 45 is played over multiple rounds. At the end of each turn, the sum of open numbers is added to the total of previous turns.

Once a player’s score reaches 45 or higher, he is out. The last player standing wins the game and the entire pot if gambling.

In this version of the game, the value of the open numbers doesn’t count, only how many numbers remain open.

The player with the lowest amount of open numbers wins the game.

With such a long and rich history, there are endless local variations on how to play shut the box. Here are a few of the more common ones:

In this version of the game, one player tries to close the numbers as usual while the other player’s goal is to open all the numbers.

The first player begins the game as usual, but at the end his turn, the numbers are not reset. The second player then tries to open the closed numbers.

Play continues back and forth until the first player closes all the numbers or the second player opens all of them.

This is a popular bar game in Thailand where it is usually played for drinks.

This version of the game uses unique rules to determine which numbers players can close. Set-up and equipment are the same as 9-number Shut the Box.

For example, at the start of the game, with all numbers open the player rolls a 3 and 4. The player may choose to close the 3, the 4, or the 7 only.

Unlike Shut the Box, the player can’t close the 2 and the 5 or 1 and 6 even though these numbers add up to 7.

Scoring is based on the sum of the numbers left open. The lowest sum wins.

The same set-up and rules as standard Shut the Box, but if any player rolls a 7, that player immediately loses the game and scores a 43.

A player may decide to end his turn at any time and score in the usual way.

The game starts with odd numbers open and even numbers closed.

This is the reverse of Against all Odds. Play begins with the even numbers open and the odd numbers closed.

These variants are only used when playing a game with multiple rounds such as The Long Game or ’45’. In 2 to Go, the player must close the 1 on the first roll, or his turn is over.

3 to Go is the same except the number to required is a 3.

It’s easy to learn how to play shut the box, and there are plenty of variations that make this a game worth adding to your bar games repertoire.

It’s a relaxing game that’s competitive but not too intense. Have you played yet?