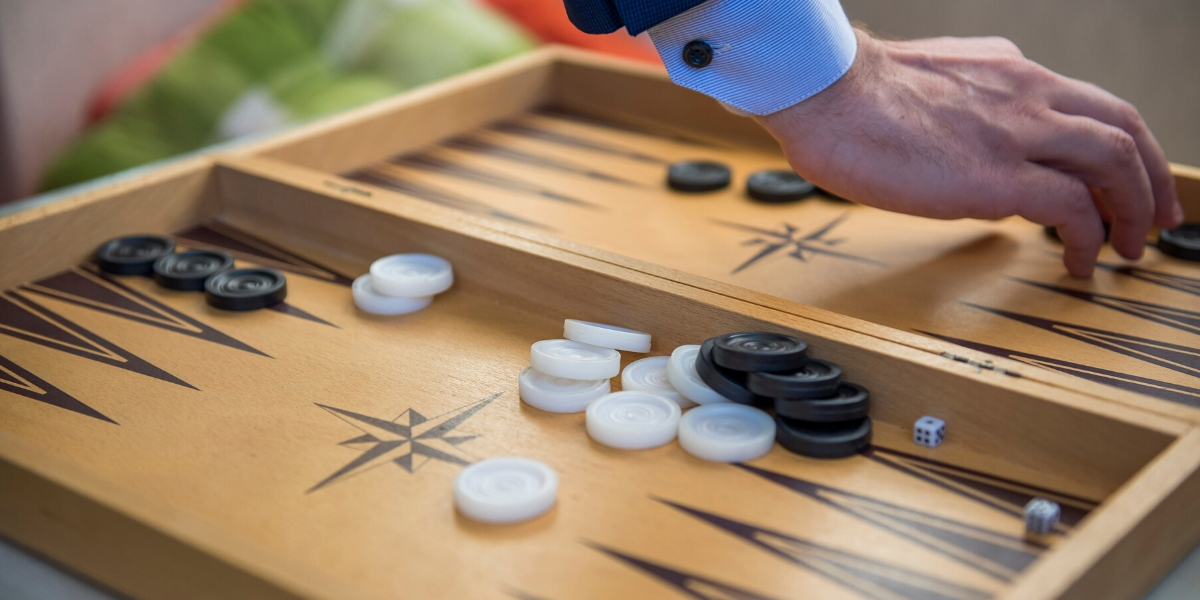 Do you want to learn how to play backgammon? You came to the right place!

Backgammon is a popular game that’s played everywhere around the world! But, how do you set it up? What are the game rules? How do you win? We are going to be giving those answers in today’s article!

Imagine you are walking the streets of Istanbul, weaving in and out of the shopping bazaars. The din of people chatting and bartering all around you, but then, just underneath the noise of this lively city, you hear the click of dice and the quick slide of checkers being moved across beautifully handcrafted Tavla boards.

On closer examination, you find yourself watching the familiar game you might know as Backgammon being played. The sight is thrilling in the speed at which it is being played.

Players throw the dice in quick succession and slide the checkers across the boards in a blur. There is barely enough time for the other player to see the dice before they are picked up and thrown again.

It is one of the oldest and most recognizable board games in the world and is known under a variety of names such as Tabula across the middle east, stretching into Greece and Afghanistan and of course, Tavla in Turkey.

In Spain, you might hear it referred to as Tablas Reales, in France it is called Le Trictrac, and in Japan it is Sugoroko.

In America and the United Kingdom though, it is simply called Backgammon and it is thought to date back 5,000 years to the age of the Mesopotamians.

Do you love board games? Check out our list for best board games for couples!

Backgammon is a two-player board game of chance and strategy. The Backgammon setup is simple enough.

Both players start with a set of dice and 15 checkers each. The checkers are placed on the familiar triangular pattern or design called points or pips. There are twenty-four of them.

Each group of points are split into four quadrants with six points to each quadrant and in alternating colors.

A game of chance and strategy? You say. Indeed it is.

Each player must decide his or her next move, calculating quickly the opponent’s next maneuver and either counter move or stop the opponent from being able to continue with their play.

It is a skill similar to the strategies of Chess, but the dice rumble strategy with each roll.

Their unpredictable behavior therefore causes this game of strategy to become a game of chance.

Backgammon is a thinkers game for sure, but not beyond us mere mortal players who come to play in the name of fun.

Children learn it and play it, and it is certainly not beyond them.

Although the game’s thoughtfulness is a large part of it for those serious grandmasters of the game, it is also a game of enjoyment. 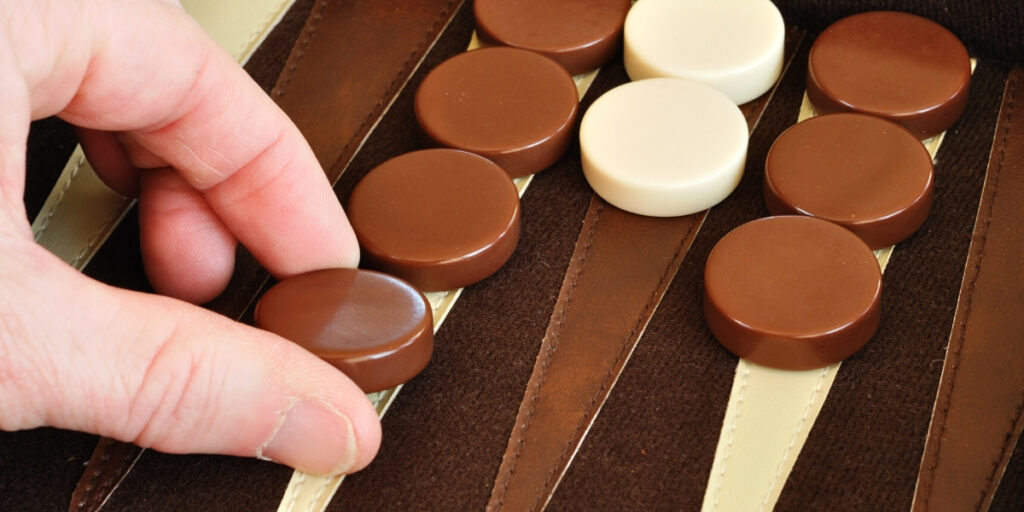 The layout of Backgammon is relatively straightforward. Players sit opposite one another.

The player with white checkers will find their home board located in the right quadrant closest to them.

The player with black or dark checkers opposes them and finds their home board to their left, mirroring the white.

Both players have a dice cup, two dice and what is called the doubling cube is placed on the side of the board.

Both players will agree on a point total to which they will play toward for the win. This point total will always be an odd number.

For a look at some of the best Backgammon sets have a look here to see what your favorite one might be.

What is the Objective?

The objective of the game is simple: be the first player to remove all of his or her checkers off the board.

The challenge here is that to remove the checkers, they must be within the home board.

How to Play Backgammon 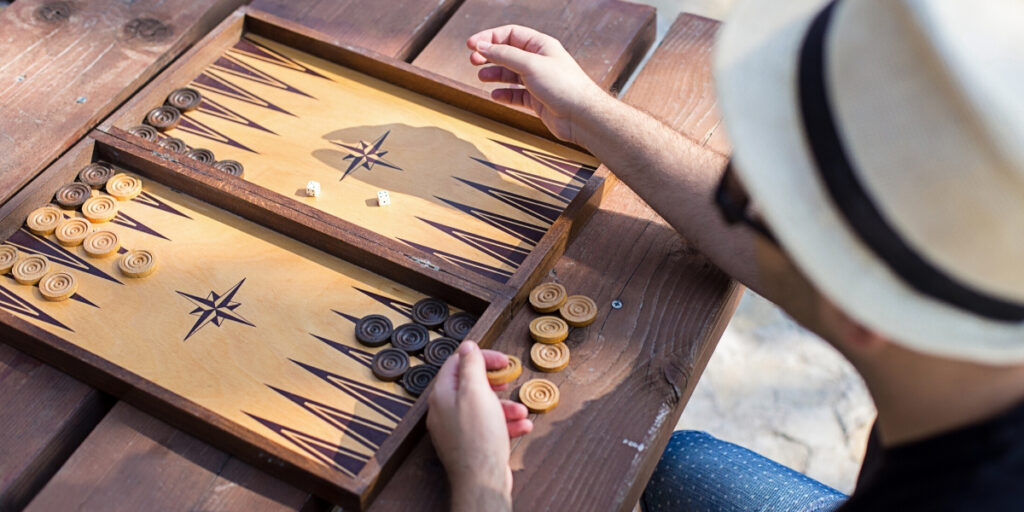 To play Backgammon, each player first rolls one dice to see who achieves the highest number to win the first move.

That first move is determined by the total of the combined rolled dice’s numbers and this informs the player how many spaces they can move.

In the event of a tied roll, both players re-roll again.

The dice must be rolled in the section of the board to the player’s right-hand side (the two quadrants making up the home board) and both dice must land flat inside that section, or a re-roll is required.

The number on each dice can be used for two individual pieces to be moved, or if the player chooses, the overall number can be used on just one of their checker pieces and they can move it accordingly.

Check out our recommendation for the 7 best dice games!

The turn is considered completed when a player picks up their dice.

This can be indicated simply by either playing their next move by rolling their own dice, or by offering a double to their opponent to start their turn.

A double, ladies and gents, means to continue the game with double the stakes as are currently being played for.

Rolls are considered voided if a player rolls their dice before the other player has finished their play.

Have a look here to find some basic tips on Backgammon strategy to help you play your best game. 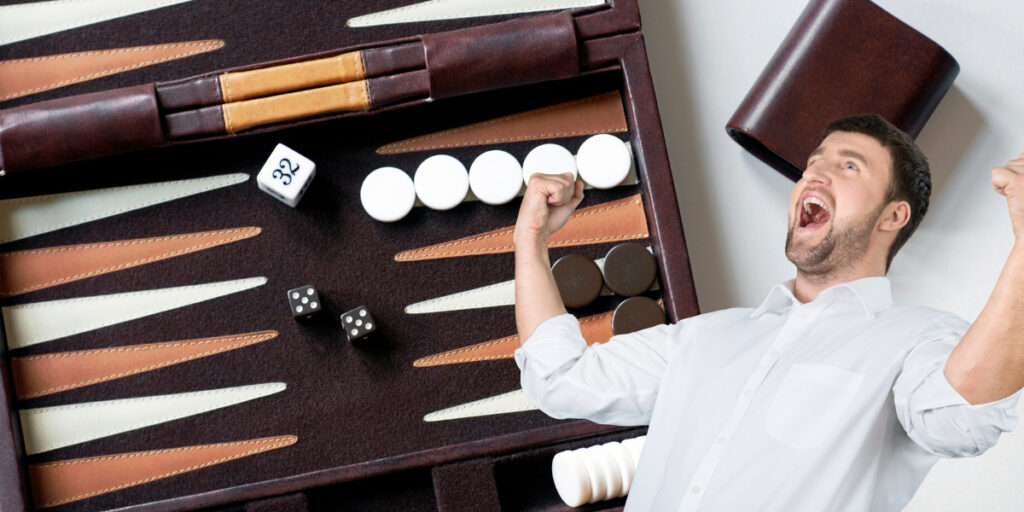 Once all of a player’s checkers are stacked in their home board, then they can begin to be removed from the board with each roll. Removal of the checkers is called “bearing-off”.

The first player to bear off all of their checkers from the board wins the match and begins the next one. And so it goes until finally, one player reaches the predetermined point total agreed upon by both players before the games started.

Now you know how to play Backgammon. You’ve got the layout and the setup, and you now know the basic rules. So now it’s just a matter of grabbing your Backgammon board and a friend and having some fun.

Do you love a good mystery? Check out our Best Mystery Board Games list and discover new board games! 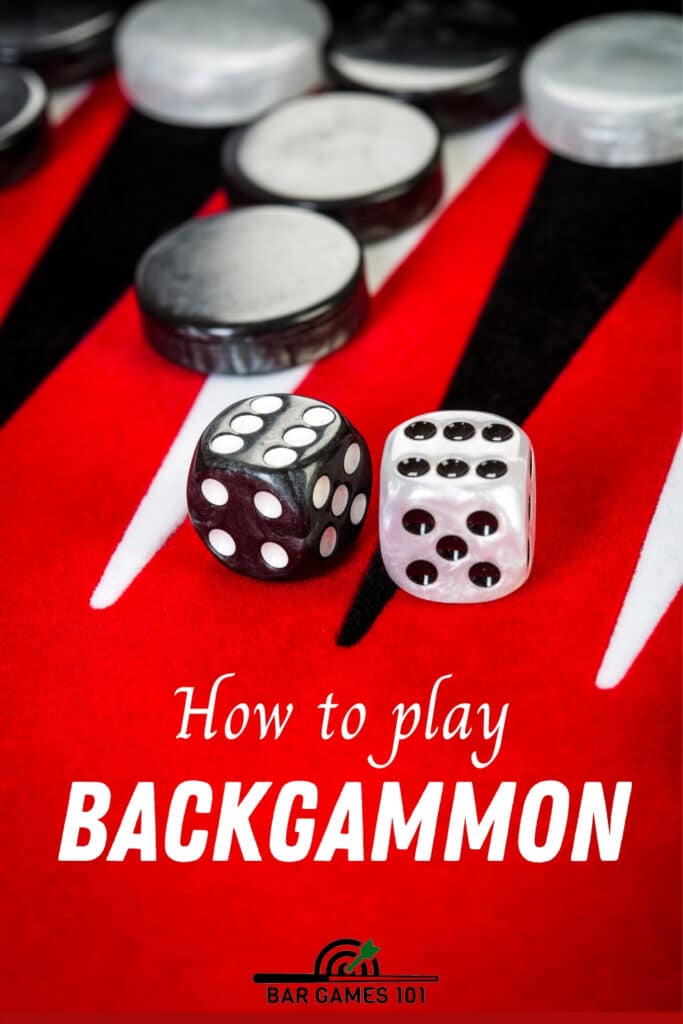