If you’re getting bored with the same old games of foosball, there are a few ways you can spice it up to make it more fun and interesting.

First, you can improve your skills and technique and gain a whole new appreciation for the technical side of table soccer.

Or you can increase your foosball shooting power to the point that you can pretty much score at will and assert your supreme dominance over your opponents.

But if you simply want to make the game look a lot cooler, you can always try out an LED foosball table with cascading lights and built-in audio.

People love to add LED accents to all sorts of items, including boats, furniture, 3D printers and much more, so why not foosball tables?

In our opinion, a high-quality foosball table doesn’t really need more flare to enhance the game.

The best foosball tables prioritize durability and craftsmanship over anything, especially bells and whistles.

But, if it brings more people to the game and becomes a showpiece in your bar or game room, why not try something different?

Why would you want an LED Foosball Table?

Play in the Dark

First, you can play foosball in the dark.

Not only does the interior of the table light-up, but with a table like the Atomic Azure LED foosball table, made by Escalade Sports, the ball actually glows too.

The Azure comes with a separate charging station for the ball. And, in case you were wondering, the goal boxes also light up.

So pretty much every aspect of the game has an LED accent to it when you play on the Atomic Azure. These tables also feature automated LED digital scoring. Yes, say goodbye to the days of abacus scoring units if playing in the dark.

In Game Music and Cascading Lights

The Atomic Azure also has in game music to add to the excitement.

The music can provide a soundtrack to your most intense games of foosball, while the cascading lights will add some additional drama. This is the same high-quality Warrior table that’s made longer to accommodate 8 players, and it’s enhanced with LED light strips for playing in the dark.

Warrior also makes a standard 4-person LED enhanced foosball table. It’s still a Warrior Pro, so you can’t go wrong with this one. Both are perfect as rentals or as the coolest foosball table you could possibly own.

Is LED the way to go?

If you want to add “flare” to your foosball table, then yes, LED is definitely one way to go.

Owners of these tables love the enhancement that LED brings to the game. Plus, these are still sturdy and high-quality tables built in accordance with official foosball dimensions.

As we mentioned, foosball doesn’t really need anything extra. It’s one of the most fun and physically active bar games there is.

And it takes a lot of practice to get good at foosball.

But these tables sure look cool.

Rent or Own an LED Table

I think one of the best options would be to rent an LED table for a party.

For example, this company rents out a battery powered LED table for customers in the Long Island and New York City area.

And here’s another company to check out for rentals.

Or, if you’re a bar owner, an LED foosball table would be a great way to attract foosball enthusiasts to your establishment, as well as younger patrons that are new to the game.

If you do decide to purchase an LED table, you pretty much have two options: the Atomic Azure or the Warrior Pro.

Both are great tables.

The Azure is less expensive and, frankly, not on the same level as a Warrior table.

However, it would be more than adequate for most foosball players.

Plus, the Azure is all about LED, so you get many more accents (as mentioned above) including the glowing ball, digital scoreboard, in-game music, cascading lights, and more.

The Warrior LED table is simply the same industry-standard Warrior table with the addition of an LED light bar.

It is more expensive, but the table is a beast. 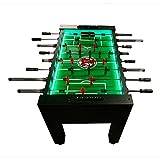 What do you think of these tables? Have you tried one out? Let us know!

We’re always on the hunt for new takes on some of our favorite bar games.