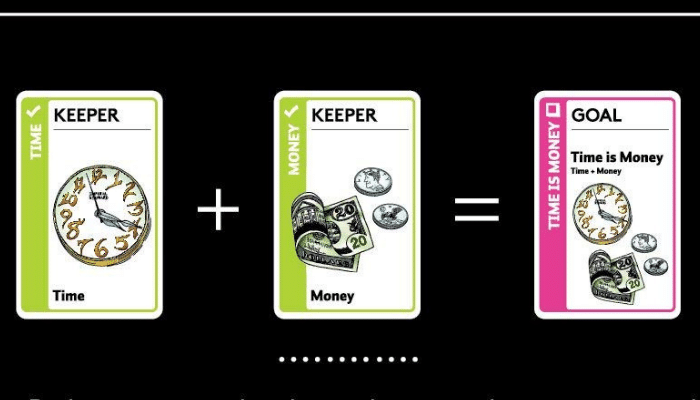 If you like the simplicity and portability of card games, but you’re bored of playing blackjack and solitaire, there’s a different kind of game in town.

Fluxx is a unique and inspiring card game that you can take with you wherever you go.

As nothing more than a deck of cards, Fluxx can conveniently slip into your pocket and travel with you to conventions, vacations and more.

However, this simple game packs a creative punch.

While there are people out there who might not see the value of Fluxx, it’s one of those games that virtually anyone can play.

The unique feature of Fluxx is that it has no hard and fast rules. The mechanics of the game change consistently according to the whims of the players.

That means that you can never really go into a game with a pre-set strategy in mind. While this won’t appeal to chess players and analytical minds, it’s great if you like the idea of a game that’s new every time you play it.

Fluxx is fast-paced, fun and most importantly, it’s fresh. You won’t find another game quite like it on the market today.

Here’s everything you need to know about how to play Fluxx if you’re playing for the first time. 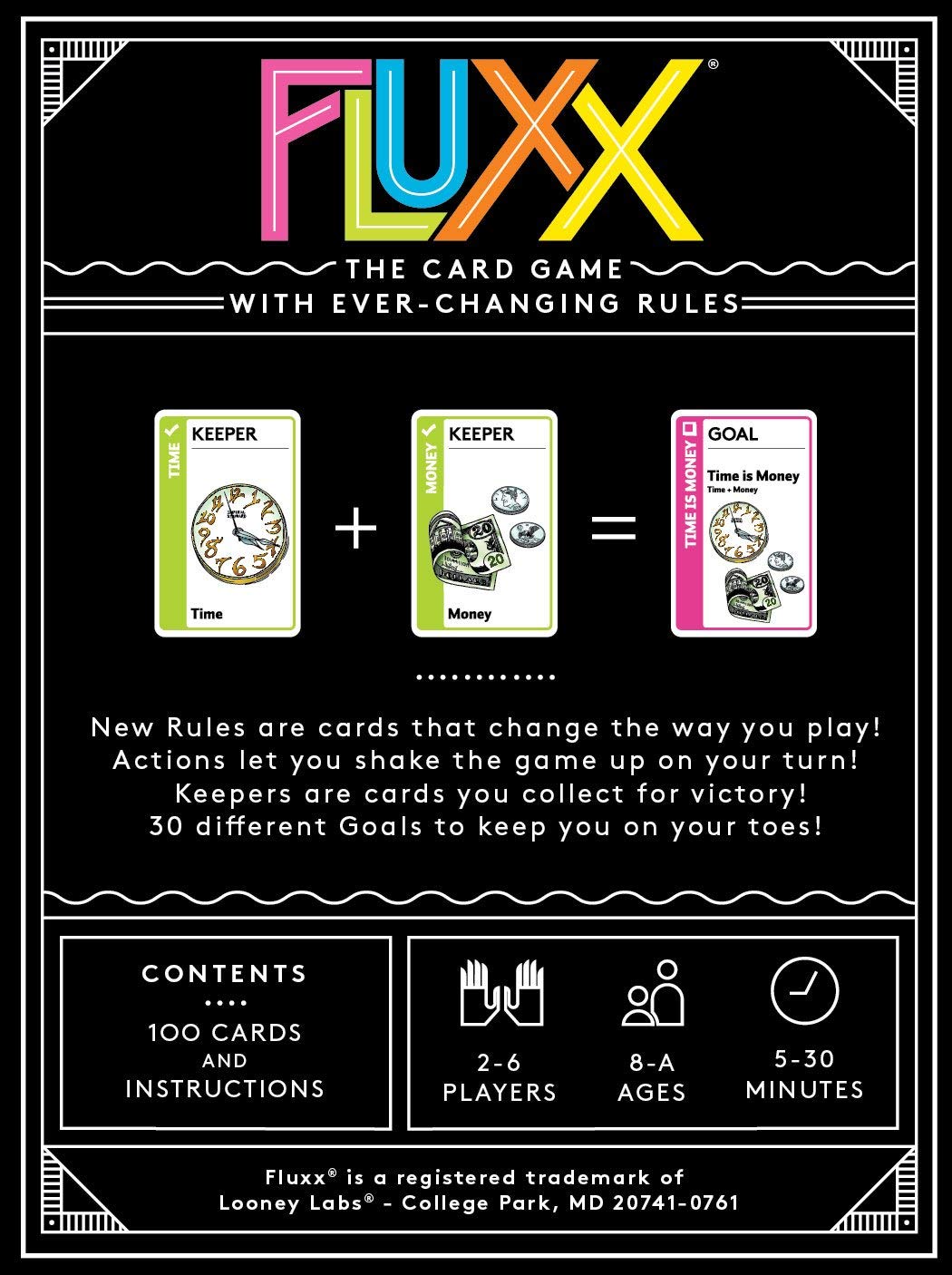 The History of Fluxx: Where Did Fluxx Begin?

Fluxx is the brainchild of a man called Andrew Looney, who designed the game in 1996. It was one of the first titles to be published by Andrew and his wife’s game design company “Looney Labs.”

The original print appeared in 1997, with only 5,000 copies distributed in the beginning.

The game was an instant success and was later licensed to Iron Crown Enterprises for global distribution. Then, in 2003, Amigo Games authorized and published a German Language version of the game.

By 2005, new versions of the title had been released, such as Eco Fluxx and Stoner Fluxx.

After that, the new iterations kept on coming. Over the years, we’ve seen everything from Batman Fluxx, to Drinking Fluxx and more. (Scroll down for a few of our favorite versions)

In 2008, Zombie Fluxx received an award for the top traditional card game that year.

In 2013, there was even a board game Fluxx released, which quickly earned the Parent’s Choice Recommended Seal for Games.

For fans, the Fluxx game is something worth seeking out at conventions, where teams often give away unique promotional cards.

Unfortunately, it’s not certain whether you can still sign up to receive freebies today.

How Do You Play Fluxx?

Here’s where things get complicated.

On the surface, Fluxx doesn’t look like much. It’s just a card game with a deck featuring designs depending on the style you choose.

For instance, the Math Fluxx deck comes with equations and math symbols, while the Cartoon Network Fluxx features cartoon characters.

The most important rule of Fluxx is this: the rules change.

At the start of each game, every player receives three cards.

When it’s your turn, you play a card and pick a card from the remaining deck. The cards you play each have their own effect.

The first edition deck of Fluxx comes with 84 cards, though many of the new packs have 100. These cards are split into Goals, Actions, Keepers, and New Rules.

The trans-formative nature of Fluxx means it can get pretty complicated.

As the game progresses, you’ll find yourself keeping track of an increasing number of rules.

Depending on the style of Fluxx that you buy, some of these rules can get pretty ridiculous too.

In certain later versions of Fluxx, there’s an additional type of card called a “Creeper.” These are cards that make certain goals difficult to obtain.

When you receive a Creeper card, you have to play it immediately, which makes the game tricky.

Other, more unique cards that exist among specific decks include “Ungoal” cards and “Surprise” cards.

If all of this sounds pretty complicated to you, don’t panic. The easiest way to remember how to play Fluxx is this: “Pick a card and play a card.”

The rules start that simple, and you’ll learn the rest as you go along.

5 of the Best Versions of Fluxx To Try

One of the things that makes Fluxx such a great game is how many different versions there are.

Because the rules of Fluxx are constantly changing, it’s tough to feel as though you’re playing a repetitive game.

However, if you ever get sick of the option you have now, you can always try a new version.

Many different decks come with their own distinct rule cards, and additional playing styles to try.

Here are some of the most popular iterations of Fluxx to consider if you’re a complete beginner. 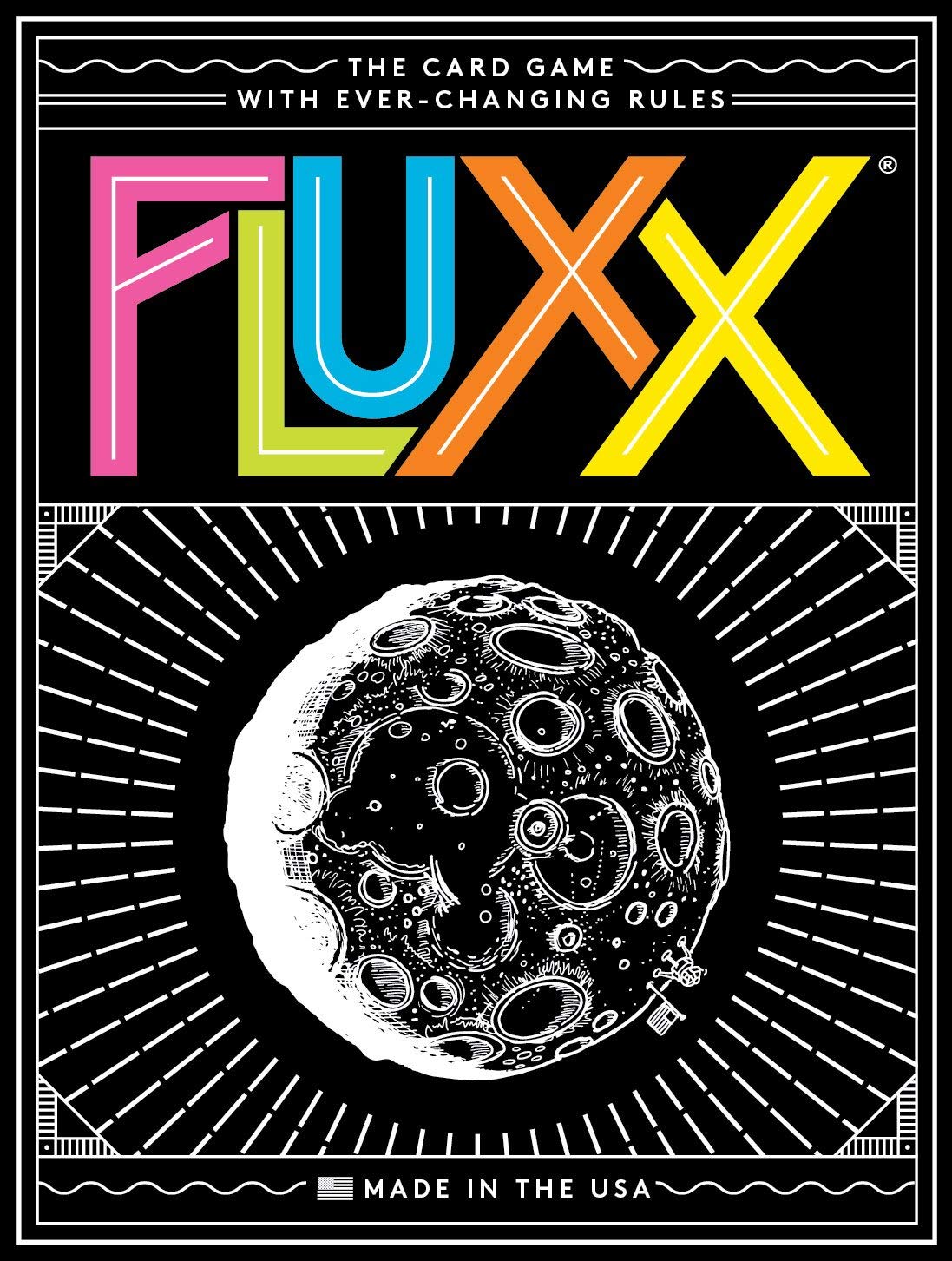 Fluxx 5.0 is the traditional version of Fluxx, with just four types of cards to worry about. 5.0 differs from its predecessor with new goals, actions, and rules. There are also various exciting updates to the illustrations too.

If you’re looking to get a feel for Fluxx for the first time, this is the easiest way to get started.

Once you begin to fall in love with the game, you could potentially shuffle some 5.0 cards into other decks too.

We recommend not mixing two of the same deck. Otherwise you could find yourself with super repetitive cards.

Cthulhu Fluxx is intended more for people with a deeper knowledge of Fluxx. It advertises itself as the “card game that will drive you insane,” but don’t let that put you off.

Cthulhu Fluxx is one of the more complex versions of the game because there are so many additional cards, including “UnGoals” and “Surprise” cards.

There’s also plenty of opportunities with this version to make sure that nobody wins.

For instance, if an Ungoal is placed on the table and the conditions are met, you all lose. 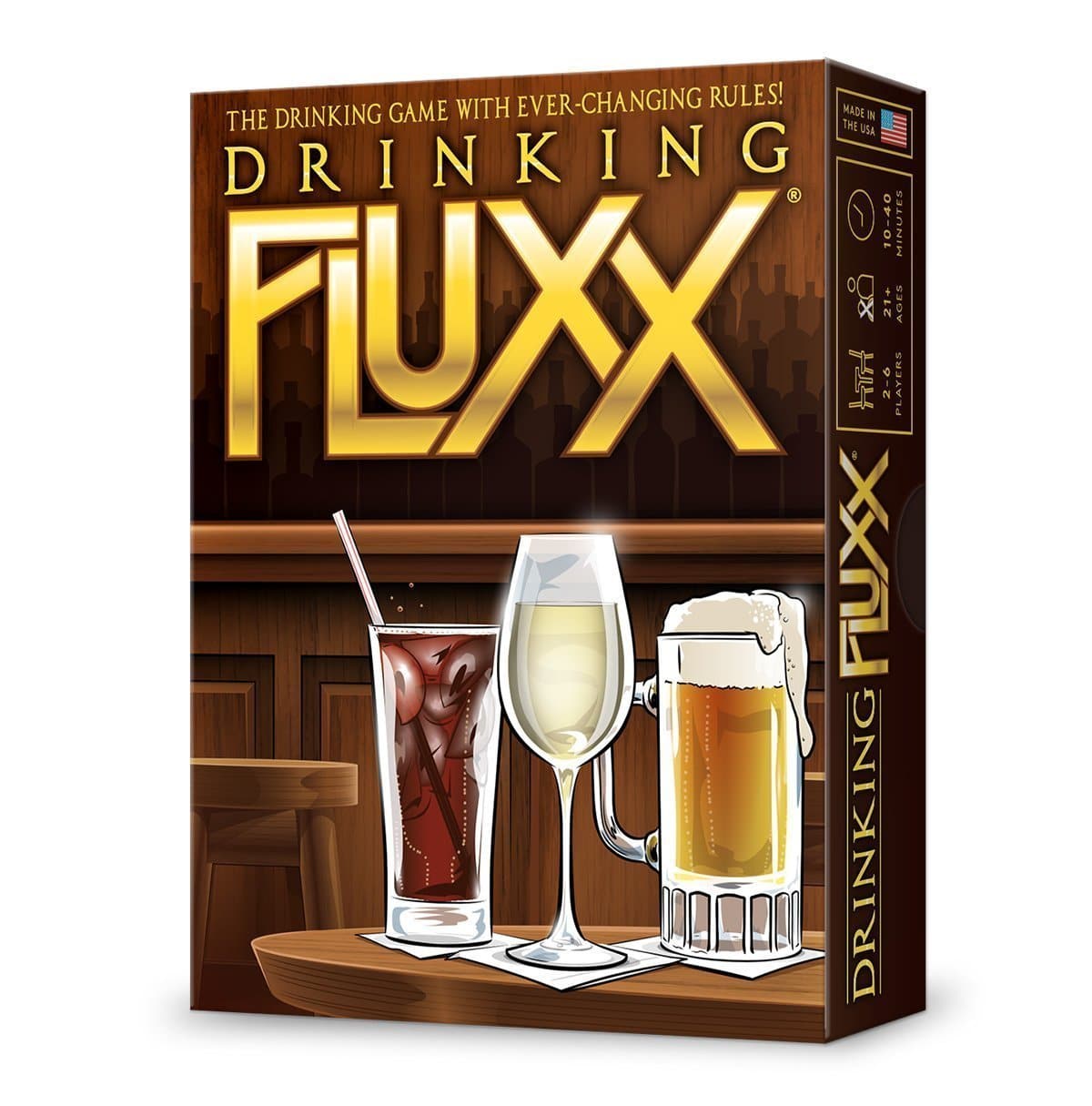 If, after a mind-boggling game of Cthulhu Fluxx you decide you just need to relax and unwind, then Drinking Fluxx is the game for you.

Don’t worry; the cards are spill-proof, so you don’t have to worry about getting too rowdy.

Drinking Fluxx is designed to be played with alcohol, so make sure that you stock up on something you can potentially take shots of.

Oh, and it goes without saying, but this Fluxx version is reserved exclusively for adults – unless you remove the alcohol from it. There are rules you can play without drinking at all. 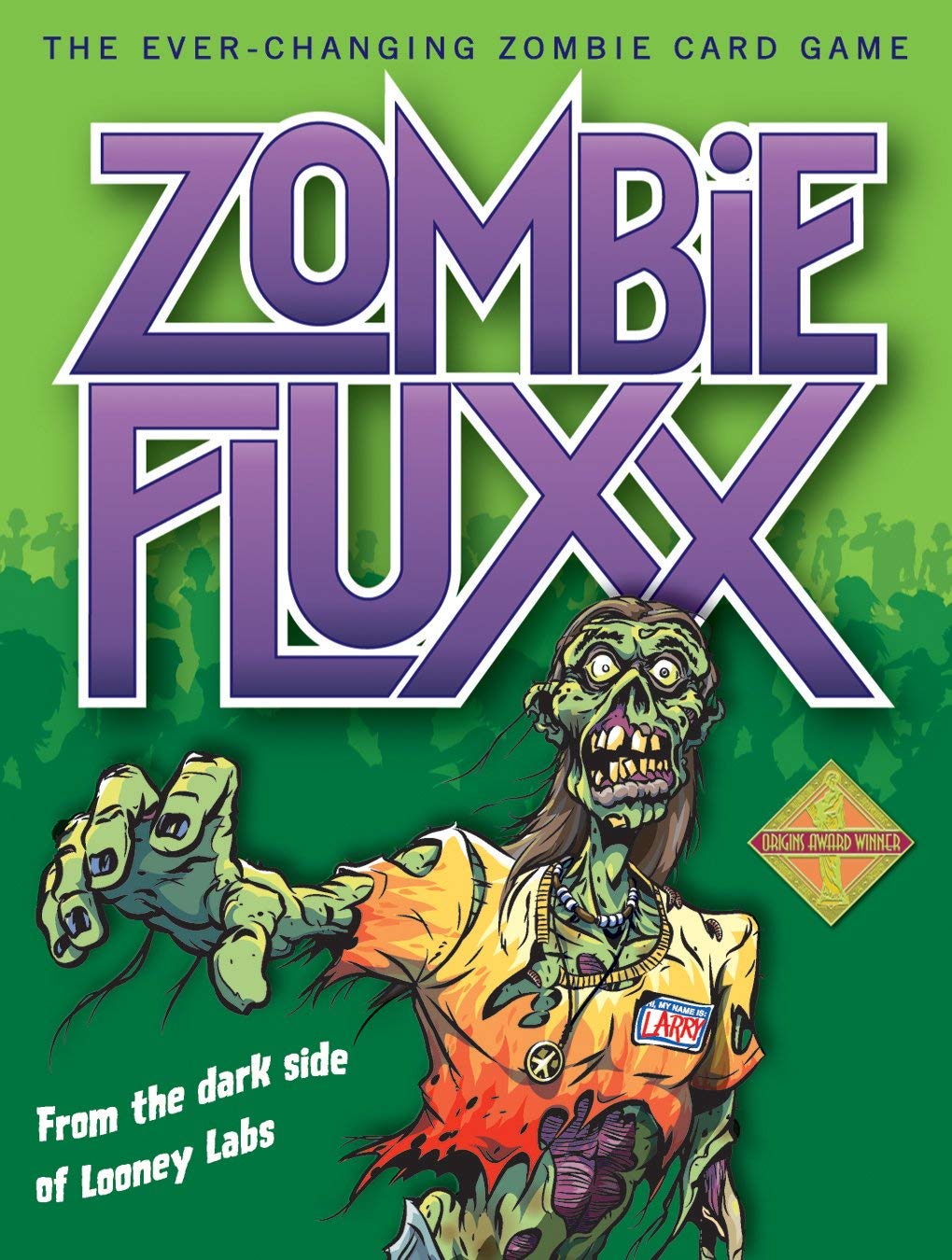 The Zombie version of Fluxx is so frightfully fun that it’s even won awards. This type of Fluxx is one of the packs that come with “Creepers.”

If you’re looking for something to make your games a little tougher, Creepers are an excellent addition. They make it much harder for you to win the game, but not necessarily impossible.

Zombie Fluxx is fun for the whole family – provided that your kids don’t mind zombies. 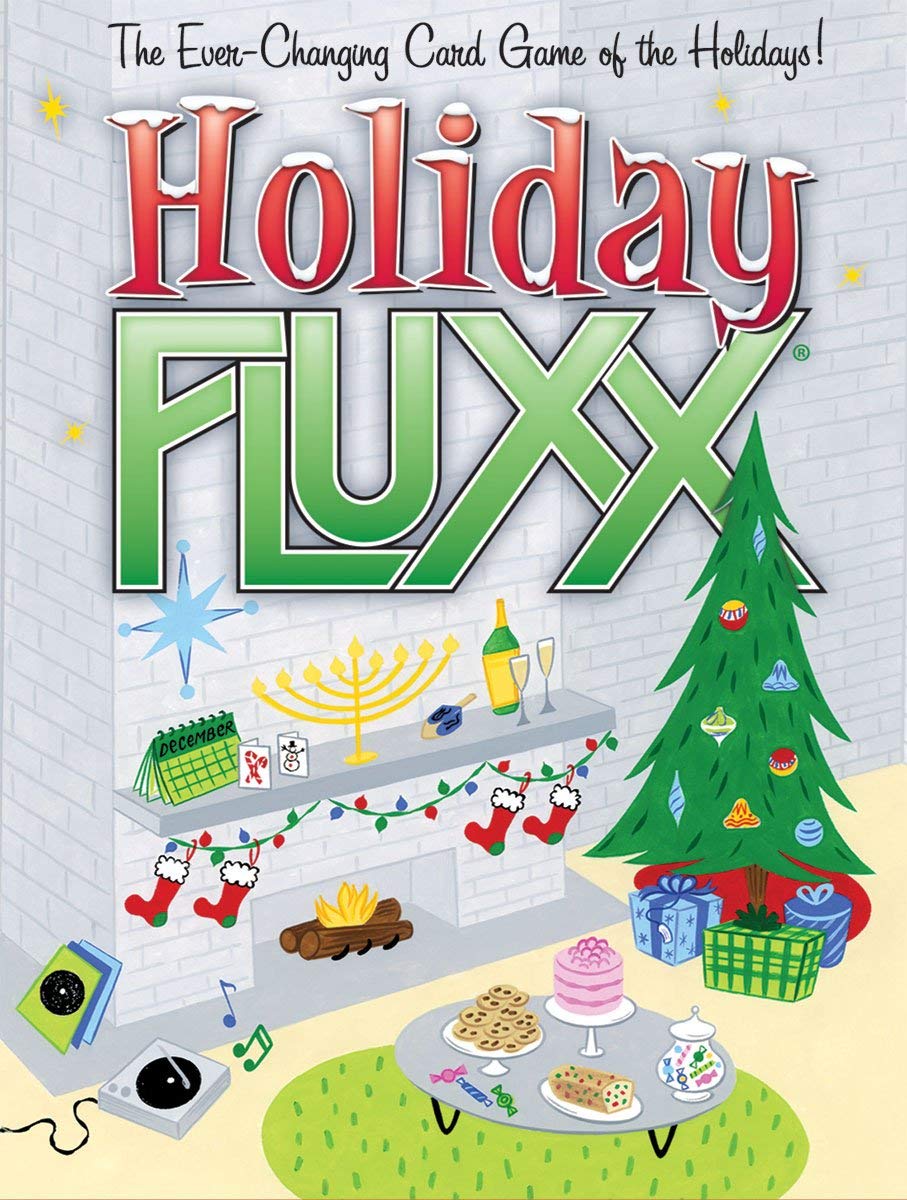 Finally, if you’re sick of the whole family relying on Monopoly and getting in fights during the holidays, why not try a different tradition?

Holiday Fluxx is the game that brings all of the celebrations you know and love together into one fun adventure. With rules and actions that every member of the family will understand, Holiday Fluxx is great for all ages.

If nothing else, it will stop you from arguing for a few minutes when you get together for those big family events.