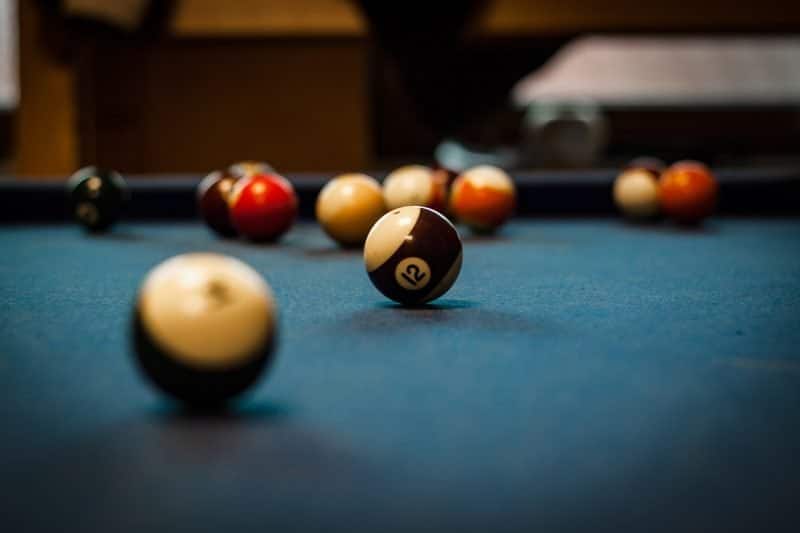 Have you heard of Cutthroat pool, but you’re not really sure what it’s all about?

It may sound a little intimidating if you’re new to pool. Yet the game of Cutthroat is actually perfect for all levels of pool players.

Cutthroat is a popular, fun and social billiards game that’s perfect when you have an odd number of players.

It can also be a great alternative to your standard 8-ball or 9-ball matches.

Cutthroat pool is usually played with either 3 or 5 players. Each player is assigned a group of balls, and the object of Cutthroat is to pocket the balls in your opponents’ groups before they pocket yours.

In this post, I’ll cover the basics of how to play cutthroat pool so you can enjoy this fast and fun version of pool with your friends.

How to Play Cutthroat Pool

Cutthroat is played with a standard set of pool balls – numbered 1 through 15 – plus the cue ball. The balls are split up into groups, and each player claims their own group.

Before we get into the details and rules of this game, here is the basic premise:

If you’ve been eliminated during the game, you can return to the game if an opponent commits a foul.

Now for some details and an overview of the standard rules of Cutthroat.

Each player gets their own group of billiard balls in this game. You want to preserve your group and knock out the others.

There are a few different ways players can determine groups in cutthroat.

Here are three common options you can choose from:

The traditional and most advanced version is when you can only claim a group after at least one ball from the other 2 sets has been pocketed.

In 3 player cutthroat, for example, if you pocket the 3-ball and the 12-ball, you would be able to claim a group. The most likely group would be 6 – 10 in this scenario.

Other people choose a simpler version of claiming sets in Cutthroat: You claim a group as soon as you pocket a ball. This seems to be a common approach when playing Cutthroat in a more relaxed and less-competitive atmosphere.

For example, if the first player pockets a ball on the break, they can claim a group. The next player to sink a ball would then select his or her group. And the third is stuck with  – presumably – the worst group.

If the first player does not pocket any balls on the break, the next player to pocket a ball gets first dibs on a group. And so on.

Other players like to just assign groups before the game starts. Just pick your numbers and start playing.

However, with predetermined groups, it’s not always an advantage to break. You could end up sinking your own balls on the first shot.

How to Rack in Cutthroat Pool

The rack in Cutthroat is simple. Just use a standard triangle rack and place the 1-ball at the top of your rack (the apex) so it sits on the foot spot.

Place the 6 and 11 balls in the corners of the triangle. The rest of the balls can be randomly placed in the rack.

Learn more about how to rack properly.

You should use an “open break” in Cutthroat. This means that at least 4 balls must be driven from the rack so they make contact with the cushions. It prevents a safe and cluttered break. So make sure the breaking player puts a little effort into it.

If the player who breaks does not complete an ‘open break’, the next player can call for a re-rack and give it a go.

Before the start of the game, decide if you are going to play ‘called shots’ only in your game of Cutthroat.

This is usually a good idea when playing with a group of advanced players. It basically means that each player must designate which ball will land in which pocket before each shot.

However, you do not need to call how the ball will reach its designated pocket (i.e. combos or banks).

If you agree to play called shots in Cutthroat, and you pocket an opponent’s ball in an unintended pocket, it is considered an illegal shot. The ball would be spotted in this case and the player would lose his turn.

How to Shoot a “Legal Shot” in Cutthroat

A legal shot in Cutthroat requires that you make contact with an opponent’s ball first.

You cannot hit your ball first.

Then you must either pocket an opponent’s ball, or cause any numbered ball or the cue ball to make contact with a cushion. This is to make sure that each player is not just tapping the balls to play safe shots.

If you pocket an opponent’s ball on an illegal shot, that ball will be spotted and your turn is over. This also results in a foul.

Fouls and Penalties in Cutthroat

There are a few ways you can incur a foul in Cutthroat. First, as we mentioned, is if you make an illegal shot and then pocket an opponent’s ball. Usually this means you made contact with one of your balls first before pocketing an opponent’s ball.

Another way to incur a foul is by jumping an opponent’s ball off the table. However, if you jump one of your own balls off the table, you just spot that ball. If you jump the cue ball it would be a scratch.

The penalty for fouls is that one of each of your opponent’s balls that has been pocketed is returned to the table. This means that if a player had been eliminated, they can now return to the game.

If none of your opponents have pocketed balls when the foul occurs, you just ignore the penalty and the next player shoots.

What Happens When You Scratch in Cutthroat?

In the game of Cutthroat pool, scratches occur when you pocket the cue ball or jump a cue ball off the table.

After a scratch the next shooter gets to play the cue ‘ball-in-hand’ behind the head-string.

If all of your opponent’s balls are behind the head-string, you can pick the ball that is closest to the head-string and spot it at the opposite end.

Cutthroat is a pretty simple game but it can be competitive, lots of fun, and there are definitely some advanced strategies when experienced players are involved.

There are also a few possible variations on this game that work well with larger groups of players or even when playing with teams. More on this to come.

If I missed anything, please let me know in the comments!