Spit is a classic French card game that is known as slam or speed in some circles. As the name suggests, Spit is a game all about speed and plays a little differently from other more commonly played 2 player card games.

So, if you are looking for a more unique, fast-paced card game Spit is definitely worth playing. But how do you play Spit? Well, that is exactly what we’ll be examining in this guide so let’s look at how to play Spit in more detail below.

Spit is designed to be a very fast-paced card game that plays a little differently from similar games. The most unusual part of playing Spit is that it doesn’t go through the regular turn by turn process most other card games use.

This fast-paced and frantic nature makes Spit a great game if you don’t have much time to play or don’t like longer, more drawn-out games.

Spit is also quite an easy game to understand and play, but there is room for strategy.

Now if you are thinking of adding Spit to your next game night, or you are just looking for a new card game to play, you’ll need to know the rules first. Which is exactly what we’ll be looking at in this guide.

How To Play Spit

If you have never played Spit before then it could seem like a very unconventional game.

There is no turn process, and while planning and strategy which are common in other card games are still present, Spit is a game that places a big emphasis on the need for speed and quick reflexes like Slapjack.

Don’t be fooled tho! There is still the opportunity for tactical play in Spit, and we’ll be looking at that in more detail later.

But before all that, let’s get the rules out of the way first.

Spit is a 2 player game that traditionally uses 2 regular decks of 52 cards.

There is a little bit of set-up work involved with getting the game ready, but this should only take a minute or two at most.

Because of the fast-paced nature of the game, Spit is a great pub game but definitely suitable for at-home play as well.

To get started with Spit you first need to set-up the game. This can be done on a decent-sized table or even on the floor at home.

Each player will have their own deck of 52 cards to use which should be shuffled before play.

Place the top four cards in your deck in front of you in a row face up, this row of cards is called the layout or tableau.

Once both players have set-up you are almost ready to begin.

Have a short 1,2,3 countdown and then both players should shout “Spit” to start play.

Once play has started, each player should take the top card from their deck and place it in the center of the table/ playing space.

These cards will make the base of two piles and the aim of Spit is for each player to empty their decks by placing cards onto the piles before their opponent.

To do this, players will need to start moving cards from their layout row to one of the piles.

However, this can only be done if the cards in the row are one higher or lower than the card on top of the pile. For example, if one pile is showing a 6 then a 5 or 7 could be placed over it.

In Spit the suits don’t matter, and Ace cards can be played either high or low. Once a card from your layout pile has been used, a card from your deck must be replaced. So, in a game of Spit cards will be moving at a fast and frantic pace.

Players will (usually) get stuck at some point because cards in their row are unable to be played.

Once this occurs, both players must declare “Spit” again and then reshuffle the cards in the pile.

This will place new cards at the top of the pile so the game can continue.

To win Spit, you need to use all your cards in both your deck and layout row.

Once you play the last card in your layout row you are “going out” which means you have won. However, if both you and your opponent get stuck near the end of the game, the player who has the least remaining cards will win.

There are a few different ways you can play Spit. The most common variation is to alter the number of cards in your layout row. Some variations will use 5 or 6 cards in the row, while others will only use 3.

Other variations add a third pile for players to put cards on.

Generally, increasing the layout row or adding an additional pile is done to help prevent players from getting stuck and ensuring the game goes more quickly.

In the standard rules, any card that is 1 lower or higher than the pile’s top card can be placed down.

Some Spit variations keep this rule but say that only red cards can be placed on black and vice-versa. Others include the rule that cards of the same amount can be placed on top of each other like in Snap.

Spit is a simple, fast, and frantic card game but don’t be deceived. Like many similar games there is a lot of room for strategy and clever tactics.

Yes, the strategies aren’t quite as in-depth as some other games, but there is still room for strategic play.

What makes Spit so frantic to play is the piles. Since each player can utilize either one to get rid of their cards, there will be a lot of going back and forth.

Both players will naturally want to use the same pile at some point, which means a race to put a card down is bound to occur.

This means you can fake out your opponent by misleading them.

You can make it look like you are heading towards one pile to panic your opponent only to drop your card on the other one instead.

Some players say focusing on one pile will help you get rid of cards faster, while others will argue dividing your attention amongst both is the better way to play.

Either tactic can work, but a lot of it will be down to the cards you have in your layout row.

Spit does have room for strategy, but like many similar card games, a lot of it is down to luck.

So, that is everything you need to know about playing Spit.

If you are looking for a fast and simple card game, you can easily play at home and down at the pub then Spit could be the game for you!

Luck and strategy both play a big part when it comes to succeeding at Spit. But don’t worry. Even if you do lose a game you can get another played in around 10 to 15 minutes.

Fast, frantic, and fun Spit is a great card game everyone will enjoy! 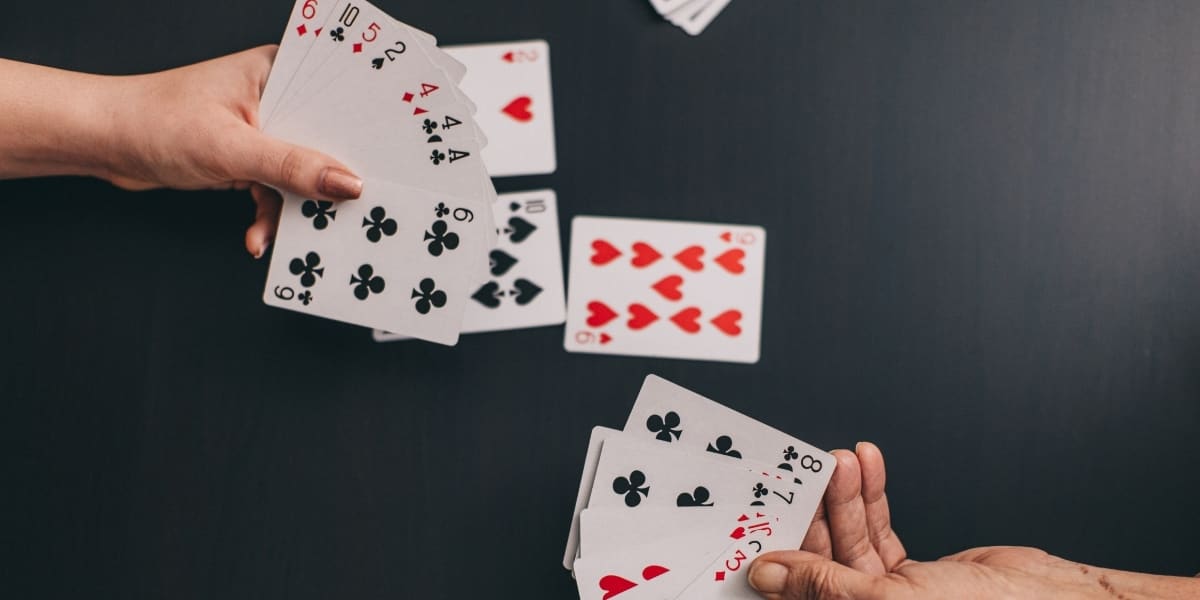