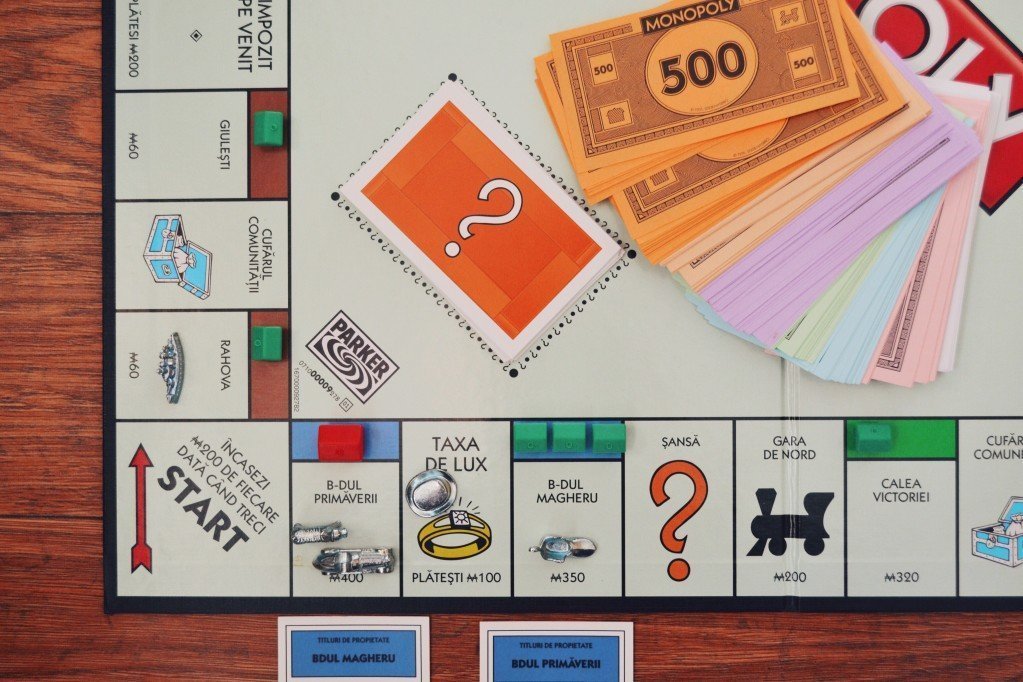 There are few games better than monopoly when you’re looking for an excuse to pass the time, show your economic skills, or simply get into a terrible argument with everyone you know.

Monopoly is well-known around the world for being one of the most popular board games of all time, and one of the easiest ways to separate the “sore losers” from the cheating bankers amongst your loved ones.

And, like all games featured on this site, it makes for a great bar game.

Especially when you find one the bizarre and fun editions included in this post.

When Monopoly first emerged in 1903, it was designed to show the public that an economy capable of “rewarding wealth” is a better option than an economy that allows monopolists to dominate their markets.

A few decades later, the board game we know today was published by the Parker Brothers in 1935 and is now available in over 37 languages. 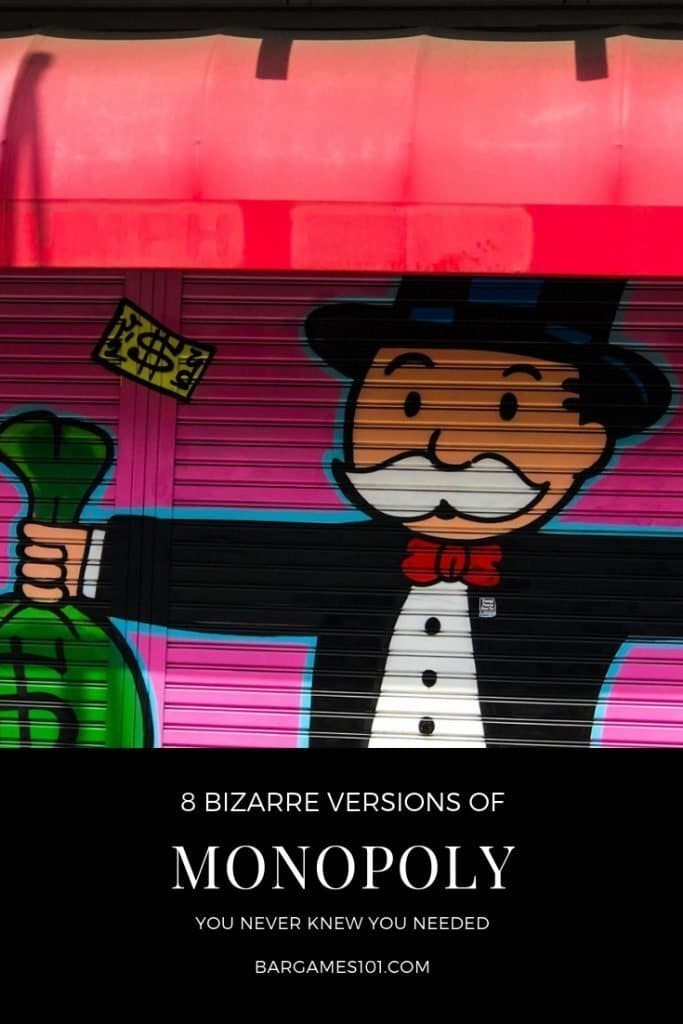 The Rise of X-Edition Monopoly Versions

The question for the people who now own monopoly (Hasbro), is how do you keep making money on a board game, decades after it’s original release?

The simple answer seems to be to continue delivering new monopoly versions to suit every trend, hobby, and obsession you can think of.

There are now literally hundreds of versions of monopoly available around the world, ranging all the way from “Bug-opoly” to Pokémon themed monopoly.

If something has been a movie, a game, a television show, or even just a reasonably-sized craze, then you can rest assured that there’s a monopoly version of it out there.

To help you get a feel for just how insane the monopoly craze has become, we’ve put together a list of some of the strangest editions that Hasbro has to offer. 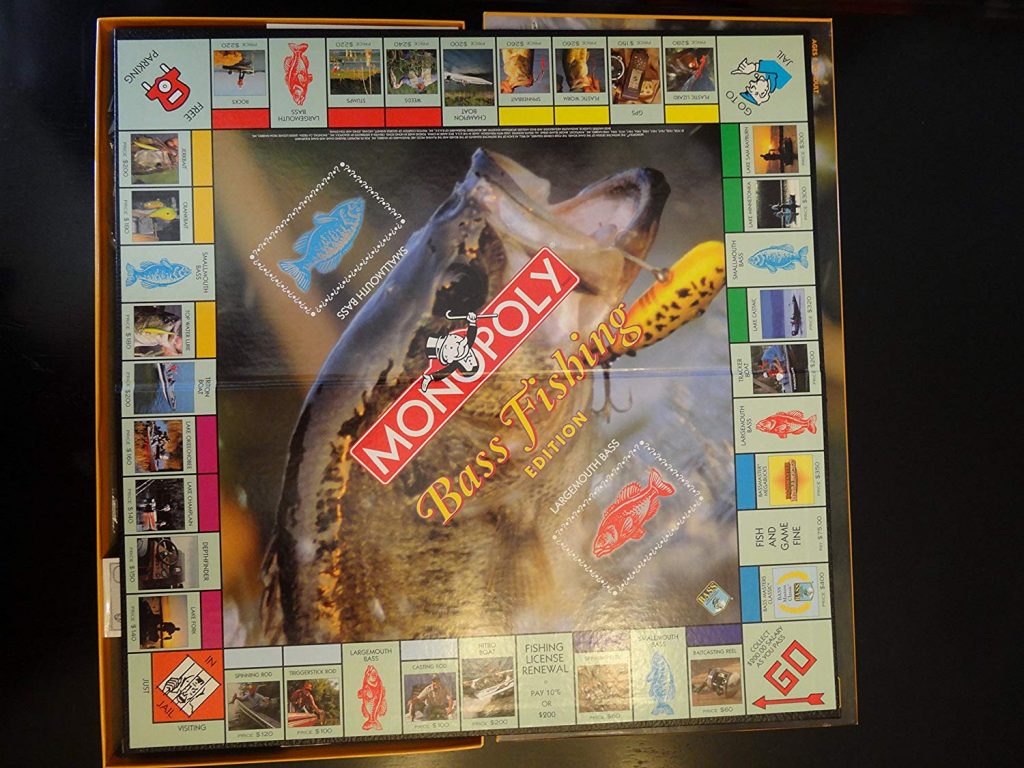 If you’ve always liked the idea of relaxing on the water with a fishing rod, but you hate the idea of actually interacting with fish, water or boats, then Bass Fishing monopoly could be the perfect game for you.

Don’t let the fact that fish can’t own hotels get in the way of you enjoying this highly niche version of everyone’s favorite board game.

The bass fishing edition allows you to buy some of the best fishing spots (according to the creator) around, and gain fishing prizes as part of their adventure.

Though this monopoly version is bound to perplex most people, there’s probably someone in your life that you can imagine would get a kick out of using a tiny bait box as their game piece instead of a Scottie dog. 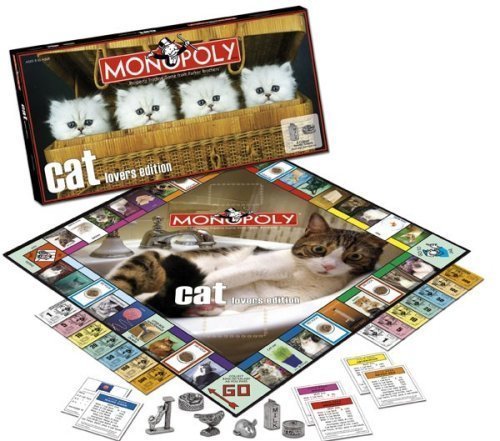 What do you get the crazy cat lady or man in your life that has it all? The answer isn’t “another cat.”

Hasbro undoubtedly released their cat lover’s edition of monopoly for anyone who loves spending their game nights looking at the adorable faces of fluffy kittens.

However, if you actually have cats at home, and you’ve tried playing monopoly around them before, you’ll know that it’s basically impossible.

Before you’ve even had time to start arguing over hotels, your cats will have laid down in the middle of the board, sent your game pieces flying and run off with your monopoly money.

If you do manage to play the game, then you’ll notice that you’re buying items typically associated with owning a cat, rather than properties, like cardboard boxes, yarn and “wet food.” 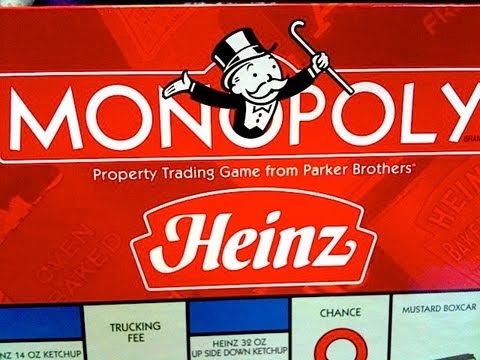 The chances are that when your partner told you they wanted to play something a little “saucier” during your next game night, they weren’t referring to ketchup.

However, if you know that your other half loves Heinz products, then there’s an ideal version of monopoly out there just for you.

The Heinz ketchup monopoly board does what it says on the tin. Instead of properties or streets to buy when you land on each color, you get various different kinds of Heinz sauces instead.

Although this monopoly edition might seem like a joke to most, we’re particularly intrigued by how they managed to find 64 items to fill the board’s squares with. 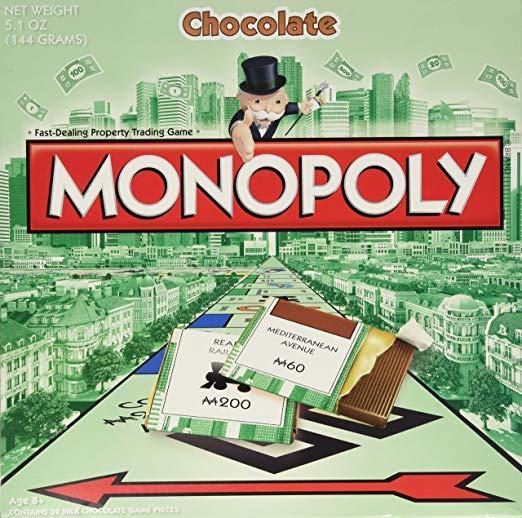 There was a trend back in the 90s of games developers releasing board games with chocolates included as pieces of the kit.

Essentially, instead of standard plastic houses and paper money in monopoly, you would get candy instead.

While at first, this seemed like a fun way to add an extra treat to your game night, many people quickly began to realize that making a board game out of chocolate wasn’t a good idea in the long-term.

Not only was the chocolate in most of these games pretty sub-par but buying them also meant that you could really only use the game once before it became useless.

The trend died out pretty quickly as customers decided that they were better off with just a standard version of monopoly and a few bars of chocolate.

But you can still find these rare chocolate Monopoly versions online. 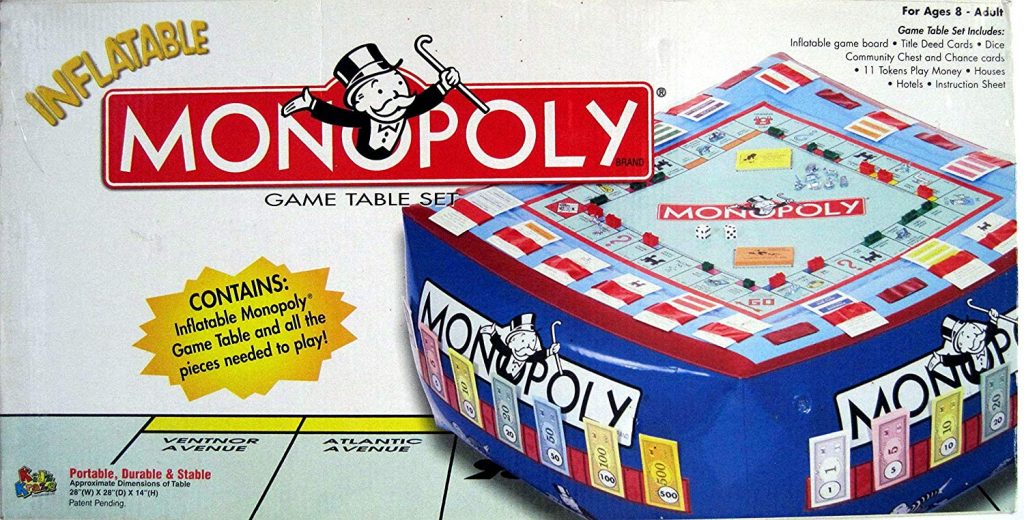 If you thought that chocolate monopoly was a bit of a waste of time, then how about a version of the game where the board is inflatable?

The chances are that Hasbro saw “inflatable” monopoly as an opportunity to take your favorite game with you into the pool, but we’re not sure how well that would work.

Although the board itself was inflatable, the cards and money were still very easy to destroy in water.

There’s a chance that Hasbro simply thought that an inflatable board was a way to do something entertaining with a game that might have been losing its appeal at the time.

Unfortunately, the inflatable board just means that you’re more likely to accidentally knock everything off the board when you move your icon too over-zealously. 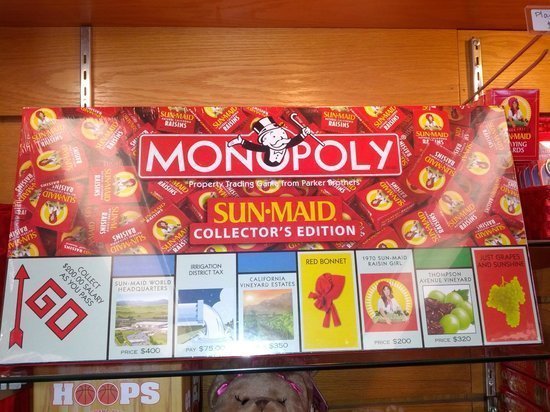 This is the third food-themed version of monopoly that we’ve looked at so far on this list.

How much you like the idea of a “Sun-Maid” monopoly will probably depend on how much you enjoy eating raisins.

Still, even if you really loved taking packets of these healthy treats with you to school every day, it’s difficult to see why you would want your entire monopoly experience to remind you of dried grapes.

The game seems like more of a specially-made gifts for employees of the Sun-Maid company than something real customers would buy.

However, it is quite impressive that creators managed to come up with 6 different icons for the players.

We would have gotten stuck after the standard “pack of raisins” and a bunch of grapes.

The good news is that if you do have this version of monopoly in your attic, it’s become something of a collector’s edition, so you should get an excellent price for it online – if you can find another buyer. 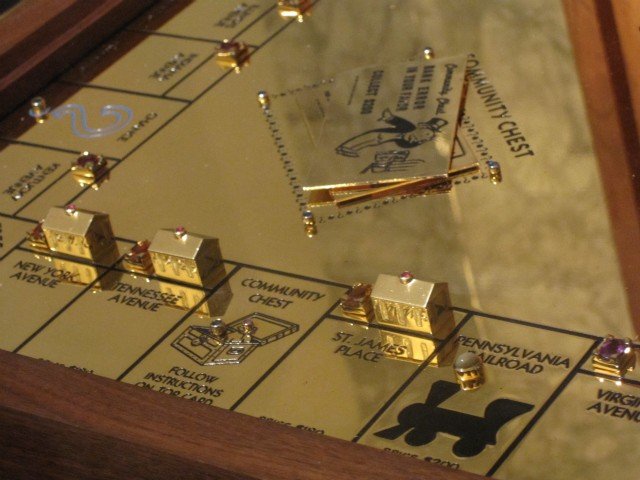 For people who love monopoly a lot more than they should, Hasbro released a version for the game’s 75th anniversary that’s sure to blow you away.

The solid gold monopoly set features a gold-plated board that weighs a full 32 pounds and is encrusted with 165 gemstones, including 47 sapphires, 60 diamonds, and 24 rubies. The 23ct board is easily the most lavish and luxurious board game you’ll ever see.

Even the title cards are gold plated, and there are 42 diamonds present in dice.

It may surprise you to learn that this indulgent Monopoly set, worth over $2 million according to the Guinness Book of World Records is actually fully playable.

It also follows the same rules as standard monopoly, unlike most special editions.

Of course, it’s locked away in a museum, so you’ll never actually be able to see if you can win a gold-plated version of fleet street. 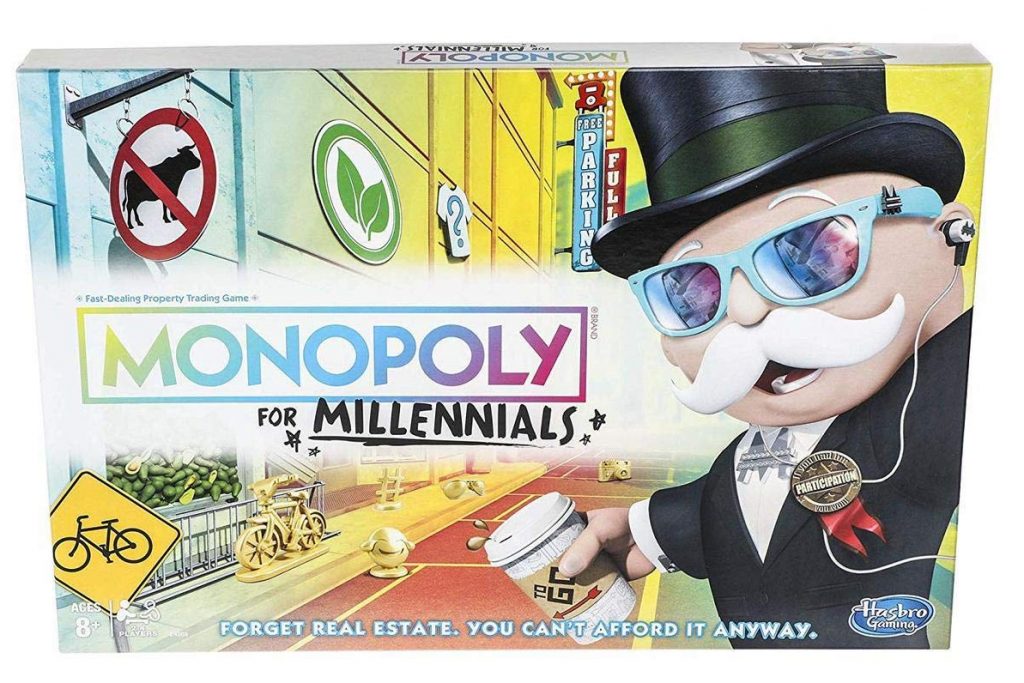 Millennials have been the butt of quite a few jokes for a while now – particularly among older generations, so it’s probably not much of a surprise that you can buy a version of monopoly specifically designed to show off how vulnerable the “snowflake” generation can be.

Monopoly for Millennials is a satire version of the standard monopoly with tokens like the emoji, the hashtag, and the smiley face.

Although many aspects of the game are the same, you can’t actually buy properties or houses, because as the game puts it, “You can’t afford it anyway.”

While making fun of the world’s poorest generation, millennial monopoly allows players to spend a portion of their tiny income on “destinations” instead of houses, such as yoga retreats and cafés.

Spending time at these destinations earn you “Experience” tokens. The person with the most tokens at the end of the game is the winner.

While this edition probably started off as a playful joke, the more you look at it, the more it seems like a game specifically designed by someone who really hates millennials for some reason.

There you have it! Eight of the strangest and most unnecessary Monopoly versions released throughout the years.

Are there any special editions that you have at home that we may have missed from our list?

Let us know in the comments below.