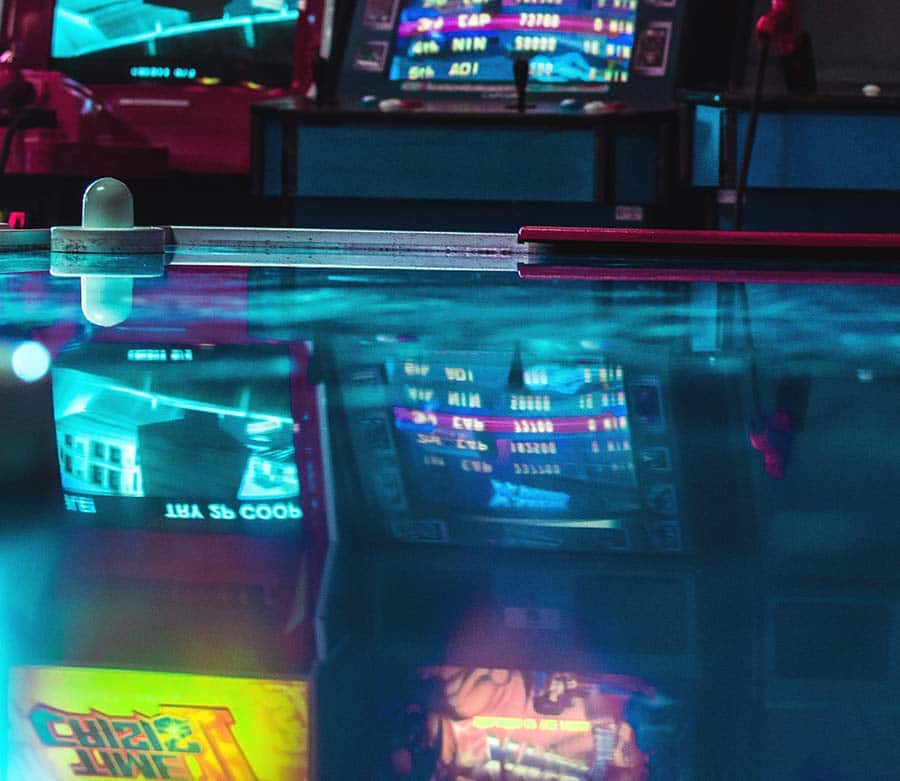 Since the first Air Hockey World Championship tournament  that took place within a New York City hotel in 1974, the Big Apple has still held fast to a few remaining tables.

But you have to truly hunt to find where one can grab a mallet and enjoy the clickety-clack sounds of a puck.

So if you’re an air hockey enthusiast and find yourself in the NYC area, there are several spots you can hit up.

A train ride away from the city myself, here are my favorites.

Whether you’re a professional air hockey player or just looking to try your hand and have a good time with friends, here are some fantastic spots around NYC to claim a table.

Granted, I can’t guarantee each tables’ condition since the time of writing this, but I’ll try to paint a picture of each spot to give an idea of what you can expect.

These are the types of New York bars where you don’t have to spend $20 on a craft cocktail, the staff and bartenders are super friendly, and the patrons are (mostly) local.

This relaxed sports bar is located in Park Slope on Flatbush Avenue in Brooklyn.

But they have more than pool tables and do, in fact, offer air hockey tables that are rentable by the hour.

This place is kid-friendly, but only during limited hours. That way, the adults can play after the sun goes down.

Still, it might be your best family-friendly option on the Brooklyn side.

This bar is an excellent place for some air hockey in the city that never sleeps—open until 4 am on Friday and Saturdays!

Decked out with communal tables and offering eats like pretzels and bratwurst, it’s a great place to also for a match or two of air hockey.

The table has seen better days, however, so expect some “dead space” where the air refuses to move the puck.

Still, it’s a nice space to hang out with friends and have a good time.

With boxing memorabilia adorned walls and ripped up leather sofas, this East Village bar will take you back to an 80s punk scene.

And to learn it’s owned by the punk rock legend Richard “Handsome Dick” Manitoba of the Dictators wouldn’t surprise anyone (although Manitoba generally brings to mind the Canadian province where the town of Winnipeg spit out some seminal punk bands).

And just how punk rock started as an underground music scene, that’s where you’ll head.

To the bar’s basement where you’ll find the air hockey table.

Furthermore, if you’re truly into air hockey and want to find fellow enthusiasts who try their hand professionally, hook up with the local Air Hockey NYC Meetup that meets once per month.

So it’s no shock this Williamsburg bar has an air hockey table. An unassuming, hole-in-the-wall dive bar with cheap Canadian brewskies, this bar is casual and affordable for the Brooklyn area.

You don’t have to go downstairs for this air hockey table.

Instead, you put some coins in the jukebox and listen to some Neil Young over the back and forth click-clack of the puck.

Oh, and remember: Although the bartenders are friendly to anyone who passes through, try to forget you’re in New York Rangers territory.

Okay, so maybe a dimly lit dive bar just isn’t for you.

Maybe as a parent looking to school their son or daughter in some one-on-one air hockey lessons, you don’t plan to drink at all.

If that’s the case, here are a few family-friendly NYC game centers (in addition to Ocean’s 8 sports bar) that everyone can enjoy!

The Chinatown Fair Family Fun Center is in, well… Chinatown.

And while it’s pretty much an arcade with various types of games available, from Skeeball to Dance Dance Revolution to Mario Kart, there is a single air hockey table.

It’s not the old-school, nostalgic style from the 1970s, and I’d be lying if I didn’t tell you it sported blacklights and neon-colors, but… it’ll do!

Especially if you just want to jump in for a quick practice game without sinking money and time into a full afternoon at a bar.

An institution as far as arcades go, the Chinatown Fair Fun Center was the subject of 2016’s “The Lost Arcade” documentary, which explores interesting history, including its world-famous dancing and Tic-Tac-Toe chickens. So, while it’s modern, it still has roots. 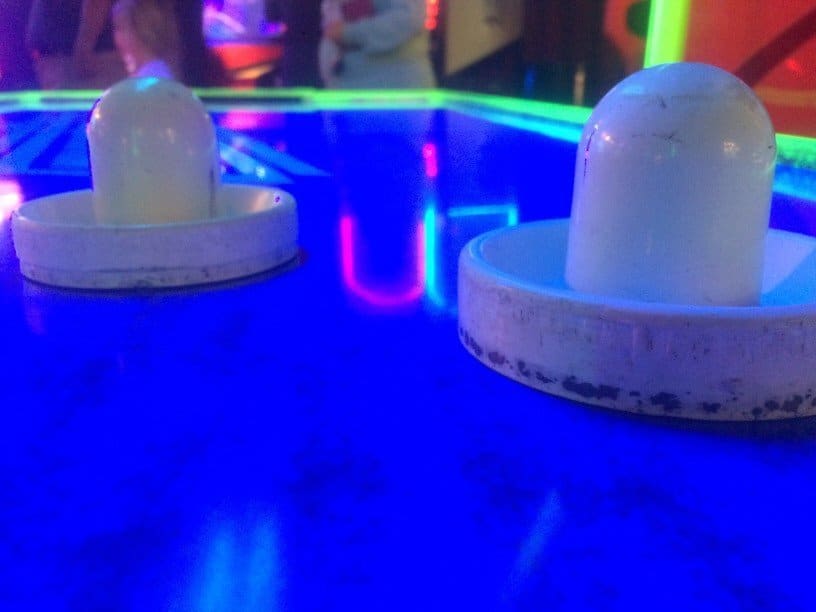 Bowlmor is a sports bar chain, mostly known for bowling of course.

But if you beeline past the shoe rentals and the row of 48 bowling lanes, you’ll find an arcade.

And in this arcade is many additional games like billiards, shuffleboard and air hockey.

The air hockey is charged by game, not by the hour, which can get rather expensive. Bummer.

But if you’re just there with the kids and only dropping additional cash on, say, chocolate shakes instead of their 123 oz.

Dunk Tank Cocktail for two—it seems like a drop in the bucket by comparison.

Available for your entertainment are two locations in the Manhattan area, which include Bowlmor Times Square and Bowlmor Chelsea Piers.

And, of course, both locations are great spots to hold birthday parties. Nevermind if you’re a kid. 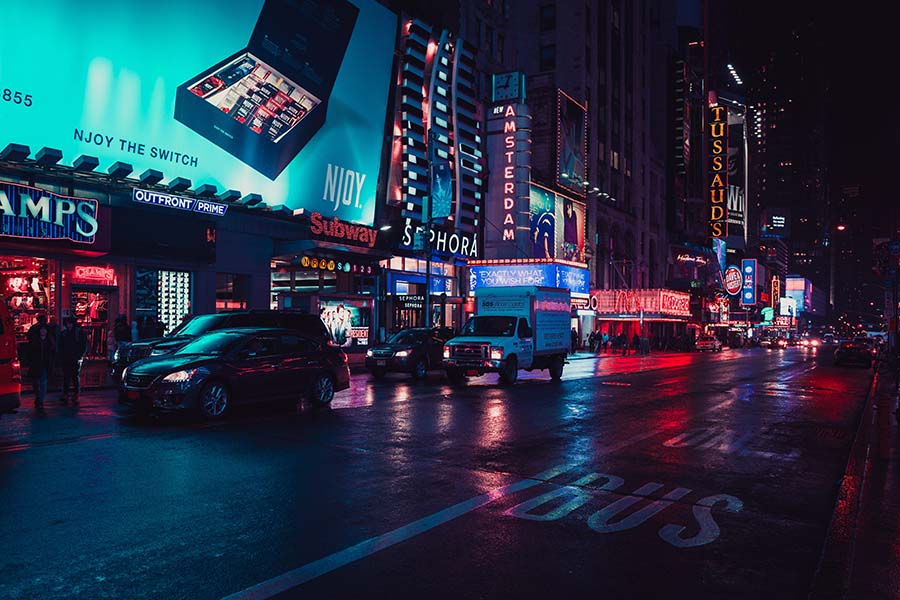 So there ya have it—the best places to grab an air hockey mallet and maybe a frosty cold beer in the New York City area.

Now, as a fair warning, you might come across places like Two-Bit’s Retro Arcade and Barcade, where, you think: A place like that’s gotta have an air hockey table, right?

Well, no. If you dive deep into the comments/reviews section, it looks like they had an air hockey table at one time. But no longer. (What’s up with that guys? Seriously.)

One can only assume the tables just simply ate their last puck and clocked out.

Maybe just one too many beers were spilled and the playfield’s pinholes couldn’t puff like they used to.

Either way, a decent place to find a fully-functioning air hockey table in NYC is dwindling. By the time you read this, another might’ve clocked out.

So do yourself a favor and call before making the trek just for air hockey.

And if you discover another hidden hockey gem tucked deep within a dive bar’s four walls, let us know!