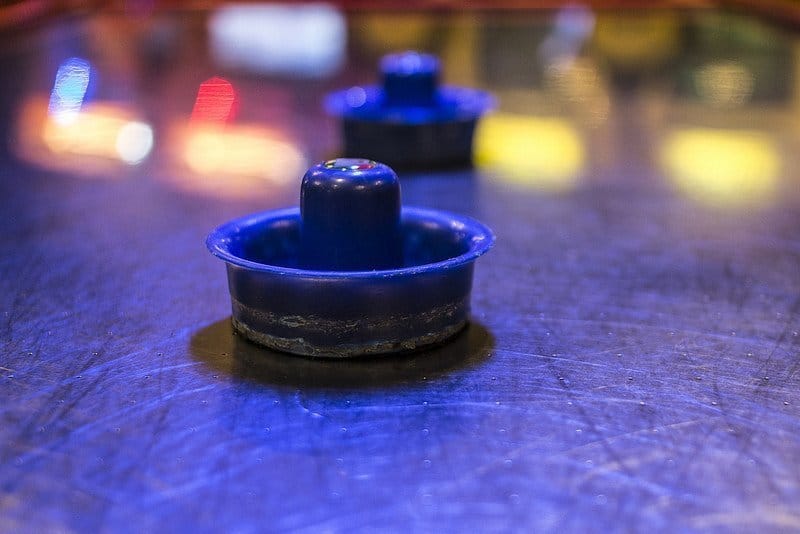 The cool air on your palms. The click-clack of a puck. If you’re familiar with the sounds and sensations, it may seem timeless.

But in fact, air hockey tables, and even the game itself, has only been around for maybe a handful of decades.

Fortunately, today, air hockey is sure to satisfy any ice hockey fan or arcade-loving kid.

But how did this entertaining—and competitive—game come about? Why are the old-school vintage tables hard to find? And what brought them back from the brink?

The Origins of the “Air Cushion Table Game” 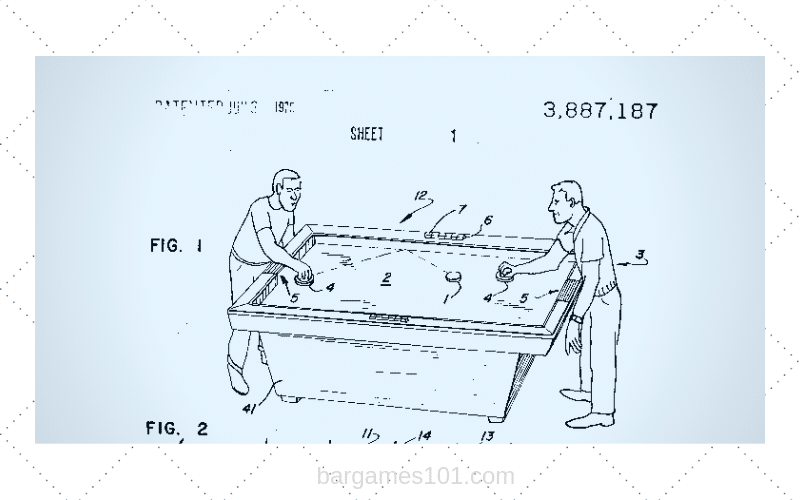 In the 1960s, Phil Crossman, Brad Baldwin, and Bob Kenrick began to develop a concept for a game with a “frictionless” yet perforated wood surface.

However, their vision came to a slow grind when they failed to figure out how to push air through the perforations.

In collaboration with Brunswick Billiards pool table manufacturer, Bob came up with the idea of a less cold, less wet (and less violent) air hockey experience by adding goals and a puck.

It was these accessories and tweaked concept that added to the overall design, which eventually became the very first air hockey table prototype (then dubbed the “air cushion table game.”)

Backed by Brunswick, an already established game table company, the air hockey tables became a hit and took off. 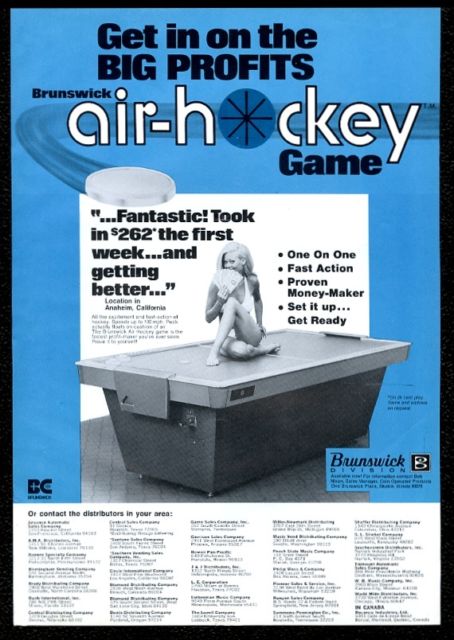 But it’s popularity wasn’t exactly what they had in mind.

Instead of becoming a legitimate sport like billiards, it became mostly known as a game kept in university rec rooms, bowling arcades, and even carnivals.

So what could they do to change this superficial image air hockey had become?

With a tempting title of “The Best Air Hockey Player in The World” and a $5,000 reward to boot for first place winner, the first organized tournament drew 31 regional champions.

Now the stakes became serious. (Not the mention it was promoted with Marv Albert, “the voice of basketball” for the NBA as the play-by-play announcer, as well as NHL’s Derek “The Turk” Sanderson.)

In 1974, they held their first Air Hockey World Championship tournament within a New York City hotel, and by 1975, the official US Air Table Hockey Association (USAA) was formed by Phil Arnold, who also helped to establish and solidify some rules and regulations.

And it was just in time! The same year, Brunswick’s original patent for an “air cushion table game” was granted.

The final round of the tournament came down to two men: Barnett and “The Spiderman.”

Barnett was a Centenary college student. “The Spiderman” was, technically, a college student, whose only reason for enrolling was to play air hockey.

The tournament between Barnett and Spiderman became a total of 40 intense matches.

But in the end, Barnett was declared the winner, while “The Spiderman,” who walked away with blisters from his vise-like mallet grip, came in second. So much for spider-sense.

“The tournament was truly dramatic with a final showdown between a Centenary College student named Barnett and an imposing feared 24-year-old player dubbed ‘The Spiderman,’ who enrolled in a community college just so he could play in college air hockey tournaments (he never actually attended any classes). After 40 grueling matches, the Spiderman was defeated, his game weakened by severe blistering on his hands. He settled for the $1,000 second prize, though.”

By 1978, the first USAA national championship was held in Houston, Texas.

Today, Texas is still considered an air hockey mecca where many competitors both originate and retire.

After this tournament, air hockey hit a mainstream lull. But where it lacked in popularity against 1980s joystick games, it gained in devoted followers.

Phil said the “only thing we players could do would be to buy up a dozen or so of the existing air hockey tables and go underground. We would be a dying breed isolated from the rest of mankind, growing older, wearing out both body and table in garages and houses — like some despised cult.”

Mark Robbins, another air hockey fanatic, heard this message loud and clear. And got a crazy clever idea.

Posting an ad in a trade publication, Robbins requested used air hockey table donations, rented a 20-foot truck to collect as many as he could all across the country, and took them all to a barn in Minnesota.

But he wasn’t just a hockey table hoarder; he hoped to create the ultimate air hockey table specimen. (If he kinda sounds like a mad genius, it’s because he was.)

As the tables sat in a Minnesota barn, Mark contacted US Billiards, the last remaining air hockey table manufacturer, requesting that they build upon the original Brunswick tables, complete with Formica-topped tables.

Finally, in 1985, Robbins (who by now had gained the nickname “Johnny Air Hockeyseed”) convinced Dynamo Corporation (know for their Foosball tables) to produce tournament-quality air hockey tables based on the original 1969 Brunswick designs.

The first year, only 100 were sold. But Robbins was determined to bring back air hockey, even if it took nearly eight years of 15-hour days and no vacation.

It took some time, but by 1993, Dynamo was finally selling thousands of air hockey tables every year. Talk about commitment.

If it weren’t for Mark Robbins’ desperate, hair-brained idea, we would rarely see an air hockey table, let alone one that works. 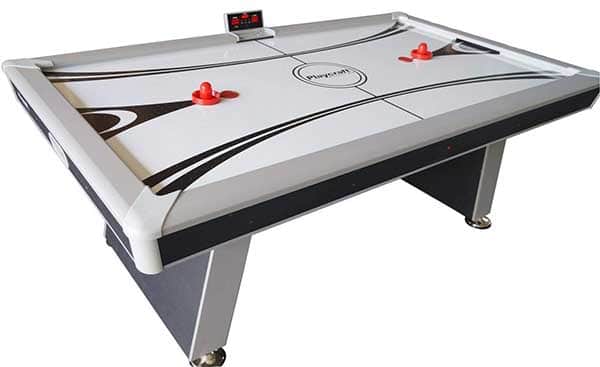 While air hockey sure had a rocky start, today it’s a mainstream sanctioned sport with many professional competitors and members of the Air Hockey Player’s Association (AHPA).