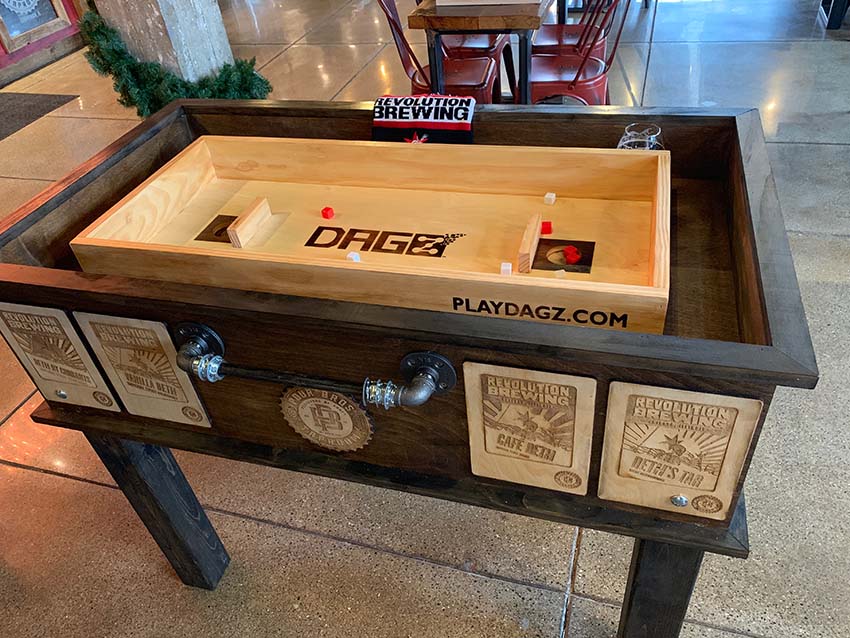 DAGZ could be your favorite new bar game. Read on to find out why.

One of our primary missions here at Bar Games 101 is to discover new bar games and introduce these games to our readers.

In this case, it was one of our readers who told us about a fantastic new game called DAGZ.

If you enjoy playing games like bags/cornhole, bocce and horseshoes in the warmer months, you’ll love DAGZ.

DAGZ, which stands for Dice Angle Games, is a compact game played in a similar manner to bags.

Except, in DAGZ, you use dice instead of bags and play the game on a beautiful hand-crafted wooden game board.

It requires a good of amount of skill and accuracy, but anyone can learn how to play this game, and it’s perfect for all ages.

With this post, we hope to introduce the game of DAGZ to even more people.

Because we know lovers of bar games will get into this one.

We all love outdoor bar games like bags, horseshoes and bocce. These are great social games that deliver plenty of friendly competition and comradery.

These games can be played in a variety of outdoor settings, whether it’s at your family picnic or tailgating before a game or concert.

But what about in the colder months, or during the summer when the weather’s not cooperating?

Or even when it gets dark and – lacking a good lighting setup – you’re forced to call it quits early, even in the middle of serious match.

Wouldn’t it be great to have a portable game option that can be played indoors or outdoors?

One that’s just as social, can be played with teams of two, and that’s challenging enough to keep you engaged for hours?

Chris Carroll had this concept in mind when he invented DAGZ and launched Dice Angle Games, LLC back in 2016.

He built his first prototype in the garage, and after testing the model with some matches against his brother-in-law (for several hours), it was clear he was onto something.

After a successful Kickstarter campaign and some very positive user feedback, Carroll and the team at DAGZ began building and selling three versions of the new game:

There is also a mini DAGZ game that is 50% smaller than the full size version and can be played on smaller surfaces (i.e. your desk).

The Custom Bar and Game Room versions are true game tables that are intended to be fixtures in a home or bar gaming space.

With these models, the game box sits in a beautiful rustic wood basin table with 12” high sides and sturdy wooden posts or metal black pipe legs for support. You can have a pipe scoring slider installed too.

You also get 3 sets of ten dice available in a bunch of different colors.

Check out the following gallery to see a few examples of DAGZ tables in their natural habitats:

Learning the basics of how to play DAGZ is easy.

First, let’s look at the layout of the game box.

The rectangular wooden box has a hole on each end. These are known as the “pits”.

Each pit is surrounded by a darker scoring square. In front of each square is a raised barrier. This barrier prevents direct access to the scoring square and pit.

So, in order to score, a die must bounce or ricochet off a surface or side of the box before landing within the scoring region.

This requires a little practice.

But just like any really good bar game, you’ll want to keep playing and testing your skills as you become more proficient with your technique and accuracy.

DAGZ can be played with 2 or 4 players.

Each team gets 4 solid color dice to throw. You always stand next to your opponent and throw towards the opposite end.

If playing in teams, your teammate stands at the opposite end of the box.

Each player throws their dice from behind the box. You alternate turns with your opponent.

When you throw, you must not reach beyond the raised barrier in front of the pit. This is the invisible foul line on the board.

Remember, you are trying to bank the die off the sides of the box to reach the scoring area behind the barrier.

After each player throws 4 dice, the round is complete.

A die that lands partially or completely within the square is good for 1 POINT.

You can knock dice into or out of scoring areas. So, if you knock a die into the scoring pit, that die will be worth 3 points.

Similarly, you can knock a die out of the scoring square to negate points. This is all part of the fun and strategy of the game.

DAGZ uses cancellation scoring. This is the same concept used in games like bags and shuffleboard. Only one team scores per round, and only points that exceed the other team’s points will count.

For example, say you throw two dice into the pit, one in the square, and one out of the scoring area, for a total of 7 points.

In the same round, your opponent lands one die in the pit and two in the square, for a total of 5 points. That means 5 points are cancelled out, and you score a total of 2 points for the round.

The team that scores gets to throw first in the next round.

The first player to reach 21 points wins. However, you must win by two.

You can also win if you skunk your opponent with a score of 11 to 0. 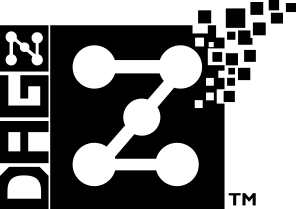 As you can see, DAGZ has a lot in common with other popular bar games.

Like darts and shuffleboard, DAGZ requires accuracy and a soft touch (in this case, with dice).

And, similar to games like beer pong and cornhole, DAGZ is designed to be a fun and social activity.

The handcrafted game sets are stylish and rustic; the perfect addition to a game room at home or in a bar or restaurant.

Plus, a DAGZ table takes up minimal space, and it offers your guests a completely new game option that they’ll pick up in no time.

If you want to learn more about DAGZ, check out their website at playdagz.com.

They also have an app available for iPhone and Android.

Have you played DAGZ yet? Let us know in the comments below!