Bocce in the Open Air

The world’s oldest game continues to grow in both bar and home play.

It is a refreshing breeze that sways the overhanging string lights stretched above the outdoor patio of this popular bar.

Embedded six inches deep running the length of the patio is an 80 by 8 feet rectangular court topped off with raked fine gravel.  Eight grapefruit-sized balls and a ping-pong sized white one stand ready for rolling.

The game is Bocce.  It is arguably the oldest of all games, foreign to many, and simple to learn.

Once stereotyped as a game played by inclusive and middle to older-aged Italian men, Bocce has been seeing a steady growth in America for upwards of 30 years now, with aging baby-boomers and now millennials alike taking up the game.

Courts have been springing up in bars, wineries, parks, and sporting and event facilities.  The Wall Street Journal even took notice of how bocce ball courts have recently become an attractive landscaping and recreation feature in high-end homes.

The reason: its shear utilitarian simplicity.

The eight balls and a smaller object ball fit into one bag and are inexpensive.

You can play on a finely raked rectangular court of ground oyster shell or fine gravel, or you can make your own course as you go along on a flat beach or hilly backyard.

The balls are 2 lbs, light enough for all ages and strengths because this game is about accuracy and touch, not distance.

And it is most definitely best enjoyed Al Fresca; as the Italians say, “In the Open Air” (although you can play indoors too).

The History of the World’s Oldest Sport

The origins of Bocce are murky and as old as time.

It is easy to imagine early cavemen having a slow day on the hunt; grunting, scratching and yawning and rolling rocks at a target in a primitive form of competition.

Shaped stone balls have been found in Turkey dating back to 9000 BC may be the first precursor of the bocce ball.  Polished stones in Egypt dating back to 5000 BC have been recovered and figures rolling balls and judging where they lie appear on some hieroglyphs.

Others claim Greece as the birthplace in roughly 600 BC, with Hippocrates, the “Father of Modern Medicine”, writing that the game is good for health.

It is widely accepted that the closest origin to the current form of Bocce originated in 264 BC and was developed by Roman soldiers during their off-time when they were battling Carthage in the Punic Wars.

The men formed teams of up to eight. One would roll a small stone known as “the leader” a short distance down the field and two teams would compete rolling balls of carved stone or wood, sometimes coconuts, towards it.  The balls closest to the leader would score points.

Strategizing and gambling, of-course, ensued, and like modern-day GIs playing cards it was relaxing and helped establish camaraderie, important things during the pressures of war.

When the soldiers returned home they brought Bocce with them and the game thrived.

From churches to castles to the city streets, the game was played by young and old, men and women, and from the peasants to the Aristocracy.

Galileo and Da Vinci played bocce during the Renaissance, and similar to Hippocrates, saw its benefits to both the mind and the body.

The sport waxed and waned in popularity in the Middle Ages, until Guiseppe Garibaldi, who unified and nationalized Italy in the mid 19th century and who was also an avid Bocce player, popularized the sport on the larger scale that led to the first Bocce Olympiad held in Athens in 1896. 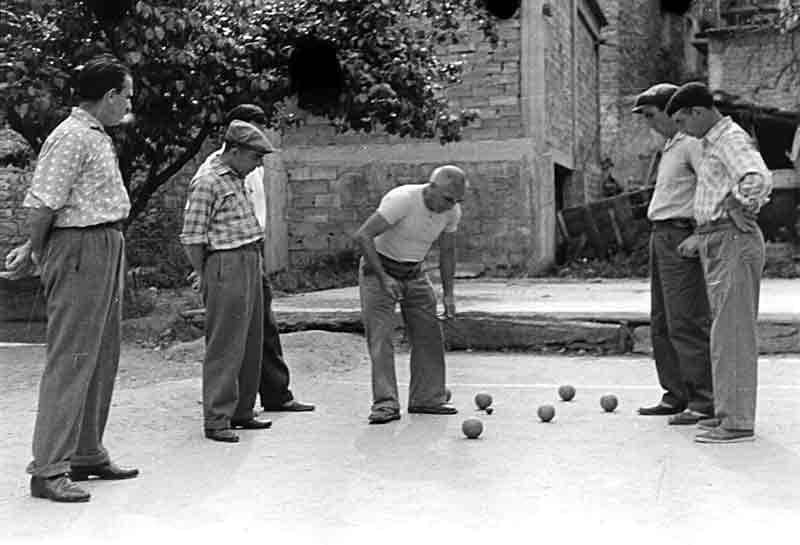 Soon all over Italy there came to be Bocciodromo,  taverns where the men would gather that had adjoining outdoor bocce courts, in every Italian town.  In the larger cities, multiple courts in parks and public squares were built to accommodate the growing popularity.

Between 1880 and 1924,  more than four million Italians immigrated to the United States.  Naturally they brought their culture, their cuisine, their music, and bocce with them.

The press release issued by the Parks Department read:  “In order to furnish his former neighbors an opportunity of playing the popular Italian game of Bocce, Mayor La Guardia has requested the Park Department to install courts in Thomas Jefferson Park at 111th Street and First Avenue, Manhattan.”

By 1958, bocce ball courts could be found in 27 parks across the city.  Also that year, the NYC Parks Department held its first Bocce Tournament.  The event drew thousands of players and spectators from all of the boroughs and was won by Ciro Carlino and Peter Favussa.

The New York Times reported the 50-year-old Carlino’s  “curving wizardry with the boccia drew cheers that rent the air. Without much of a wind-up, he rolls the boccia fifty feet, and then it makes a vertical turn, practically hugging the pallini.”

In 1976, The United States Bocce Federation was established as the game spread to mainstream America.

The USBF reports 25,000,000 Americans participate in Bocce games either recreationally or in leagues, claiming it the third most participated sport in the world behind golf and soccer.

With millennials picking up the game playing in barrooms and bar-patios and backyards, the game continues to grow in popularity.

How the Game is Played

The game begins with the random tossing of the ping-pong ball sized pallino (little bullet in Italian) from one end towards the middle of end of the court.

Usually played as a singles or doubles game, each side has four large Bocce balls they bowl towards the pallino in a rotation.

Like horseshoes, the side that does not have the closest ball to the pallino throws until they roll closer.

Related: How to Play Bocce (Your Comprehensive Guide) 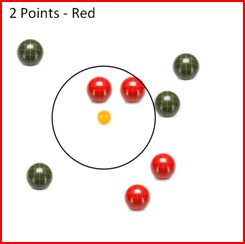 If they don’t beat out their opponents balls, the side with closest ball rolls the rest of their balls.

Only one side scores per round, with the closest balls to the pallino gathering one point each.  Most games play to 11 or 21.

The winning side throws the pallino to start the next round. 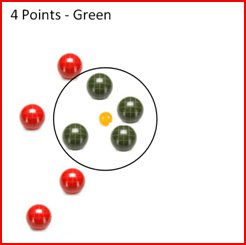 Much like shuffleboard, bowling the ball the correct distance towards the pallino is the main skill of the game.

Not too far not too short; then if your aim to the left or right is off, you’re still pin-high as they say in golf.

There’s strategy in picking the best alley (or line) towards the pallino.  It is reminiscent of pool when using controlled collisions to knock opponent balls out of the way and with running the ball up the rail if you’re playing on a court.

If you’re playing on a court and knock any of the balls out of the court, they are  “Boccia morta” or dead balls, and do not count.

There’s different bowling techniques besides just rolling the ball towards the pallino.

You can throw the ball up in the air underhanded so it plops in the gravel and sits where it lands.  Some try to put spin (english) on the ball to make it back up or curve.

Since most people don’t play the game often, its fun to experiment with the shots.  One of the favorites being an all-or-nothing hard roll when your opponent has the pallino covered by the their balls in an effort to cause havoc and break the pallino out of enemy territory.

And you do not need to have a court to play Bocce.

On the beach the same rules apply but there are no borders, just try not to lose the Bocce balls or pallino to the waves.  You can play a game back-and-forth, or all the way to the restaurant at the nearby pier in one direction if you’d like. 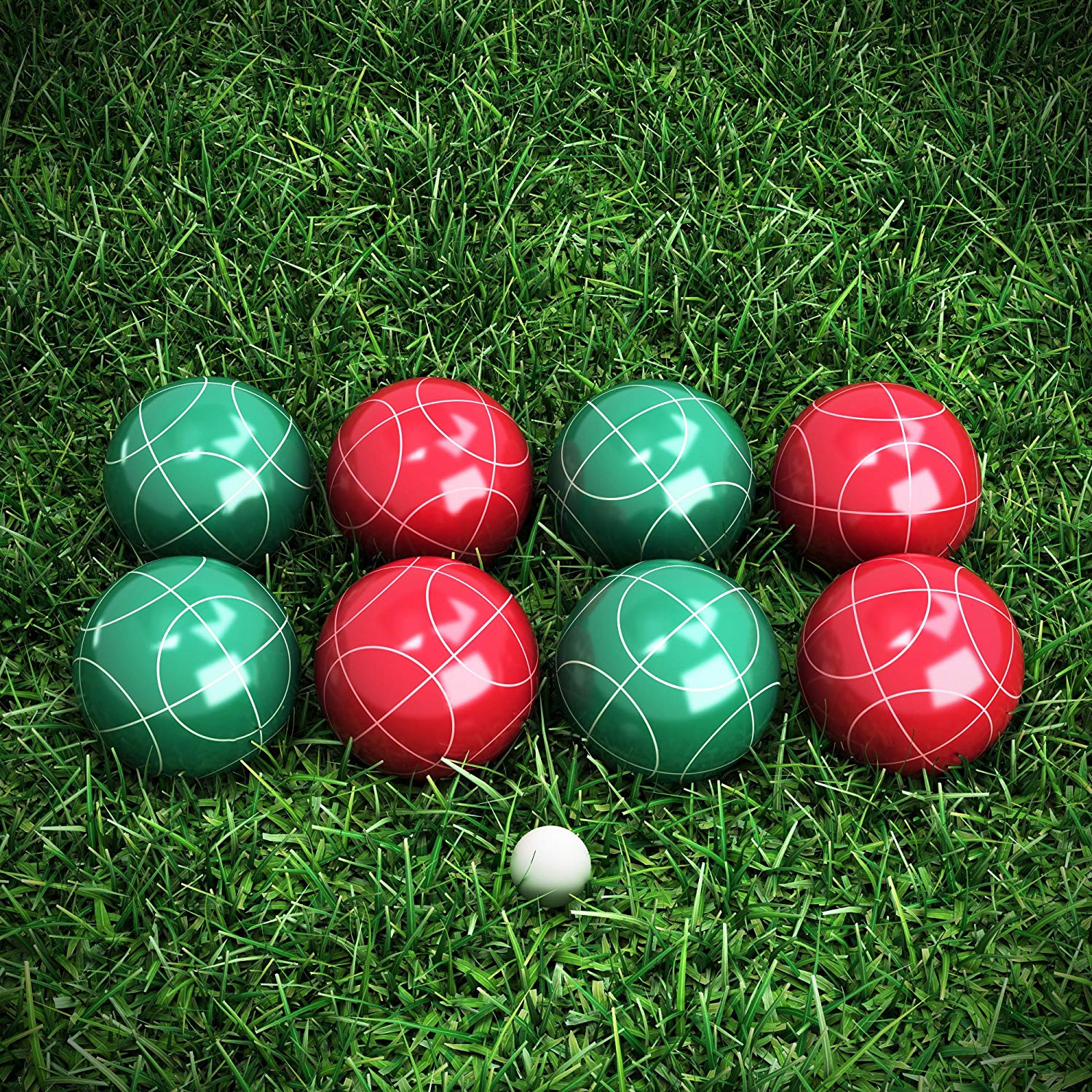 Same as with the backyard, which can make for interesting courses similar to golf with trees as obstacles and hills to make the game interesting.

You’re free to toss the pallino anywhere, so each course outside of the confines of the regulation court can be different each time you play.

The sun is setting and the string lights have been turned on back at the popular bar with the outdoor patio and you can tell the game has started by the collisions of the balls that sound like clicking your tongue, more soothing sounds than the crack of pool balls.

“It’s like curling without the ice,” said Richie Slusher, a middle-aged  occasional player playing doubles with friend Kayla Murphy on his team.  They’re up 14 to 7, and playing to 16.  Eyeballing the array of balls surrounding the pallino blocked by their opponents’ balls, Slusher continued:  “We need to do something about this situation.”

Murphy picks a line and bowls it down with speed.  The ball hits their opponents front ball blocking the pallino, ricocheting it and the pallino towards her and Slusher’s balls on the court.

The foursome carry their drinks with them and walk to measure.  Murphy measures one of her and Slusher’s  pastel blue colored balls that may be closer than the purple opponent’s one by walking the distances in foot lengths.

“I’ll be the zamboni guy,” says Matt Higginbottom, one of their opponents, picking up the rake.

Everyone kicks the balls back to the side of the court by the Bocce bar.

He walks the rake the full-length back and forth, smoothing the alleys and divots back to a flat service.

Cody Rogers, mid-twenties, playing with Higgenbottom looked around at the full tables and bar.  No one called next, a good time for a rematch

“You can play this game for hours,” he said, the sun now fully set, the hanging lights illuminating the course.

The course raked clean, the pallino is thrown towards the middle of the court to start the game again. 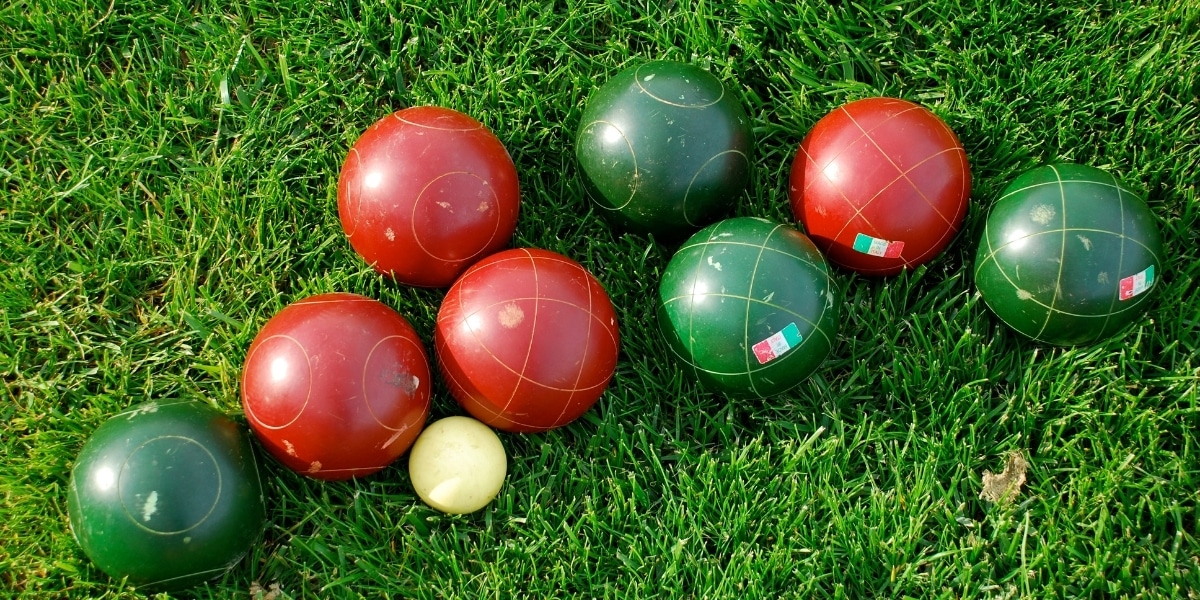 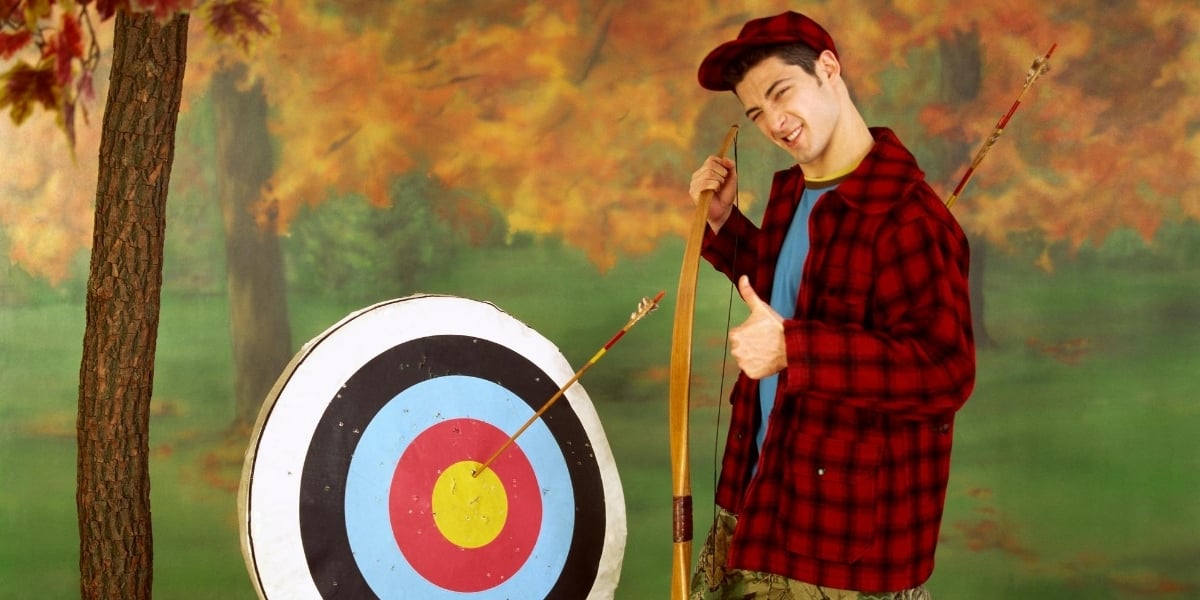 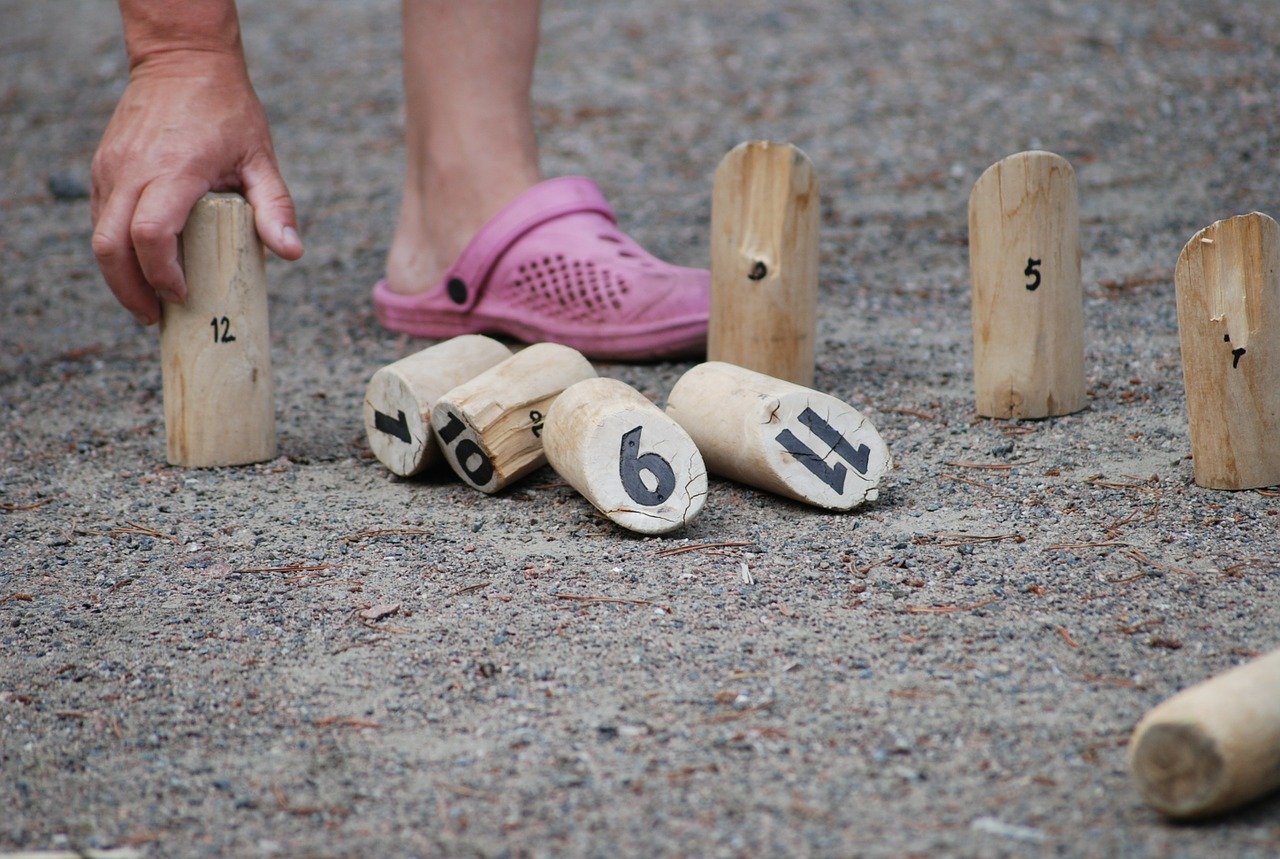 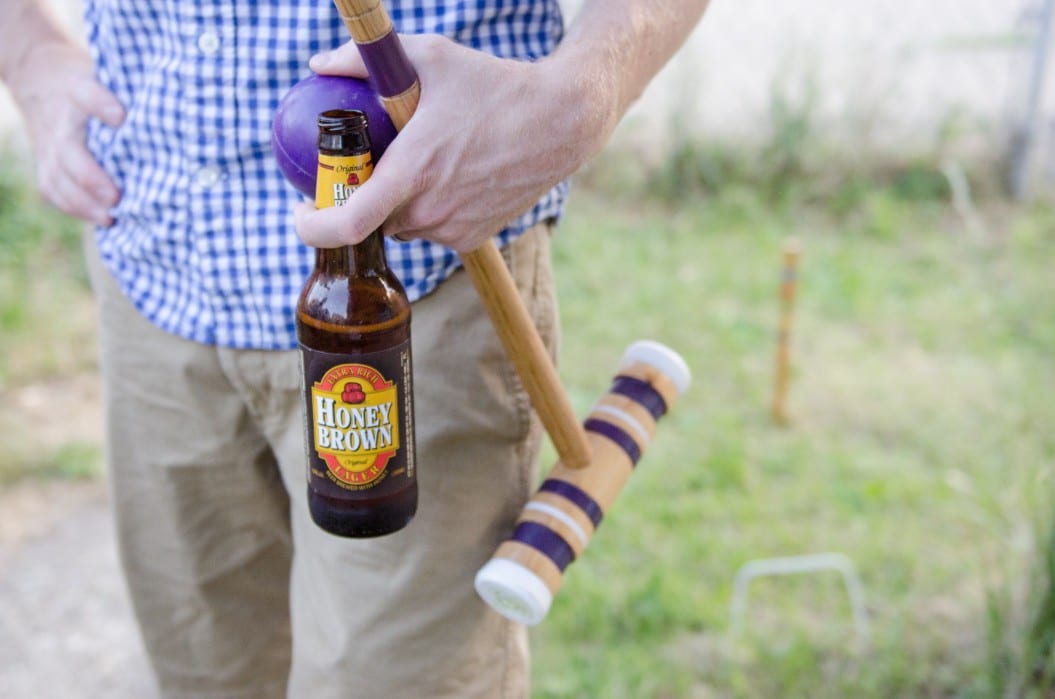