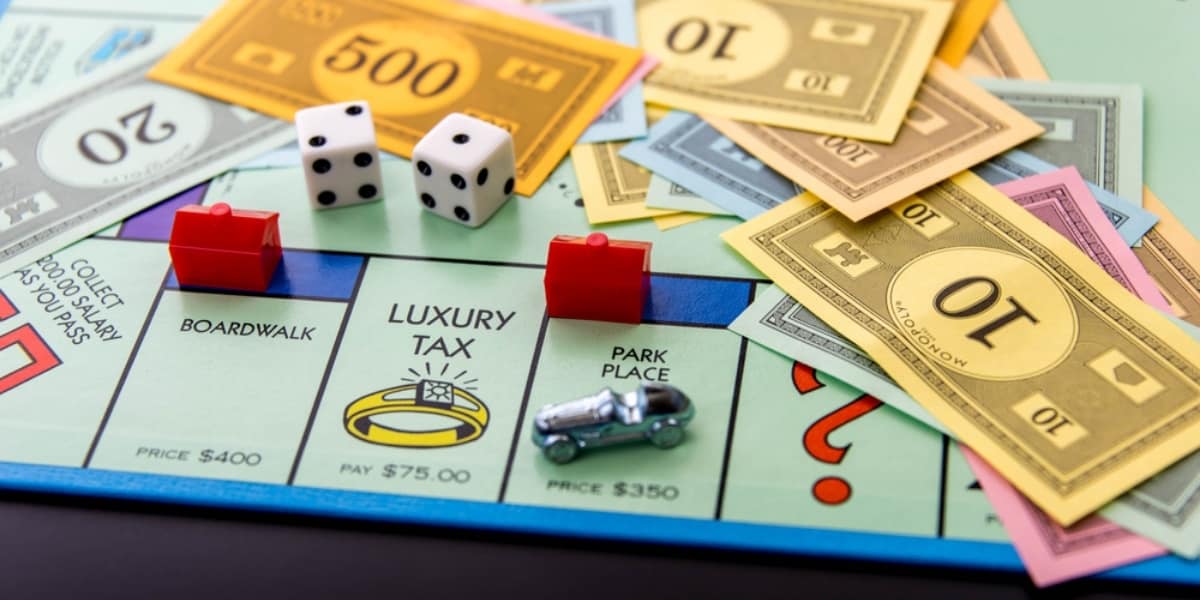 There are few games that can rival Monopoly when it comes to notoriety. Many people love it and it’s a popular family board game. Most people have likely played a version of it at some point in their lives. But what is most interesting is that there is actually a lot more to Monopoly rules than you might first think!

Monopoly comes in many forms and there are even many Monopoly collectors out there who have tasked themselves with finding every version of the game. When people think of games of strategy and tactics, games like chess and shogi likely come to mind.

However, Monopoly is much more complex than you might first think. You have to judge risk and reward with every roll of the dice. There are also the various different Monopoly rules to consider as well.

So, let’s take a more in-depth look at Monopoly and examine the rules and strategies you need to know about.

Most people know monopoly to be from the Parker Brothers however it was actually based around the Landlord’s Game that was created by game designer Lizzie Maggie in 1903. It wasn’t till the mid-1930s that the first versions of Monopoly as we know it today began to be produced.

Rather ironically the game Monopoly was based on was designed to show the negative aspects of building land monopolies. Whereas the game as we know of it today celebrates it! While this does bring up some rather interesting debates, it can’t be argued that Monopoly is certainly a fun board game.

In 1991 Hasbro acquired the Parker Bros company and now owns the Monopoly brand. With this acquisition themed Monopoly sets exploded in popularity and now there are literally hundreds if not thousands of different versions.

This might make learning the rules of monopoly seem quite challenging. However, many of these Monopoly sets only have cosmetic differences which means learning the standard rules for the game is quite simple. Let’s take a more detailed look at how to play Monopoly in more detail.

How to Play Monopoly

While there are many different versions of Monopoly out there the good news is that you get everything you need in the box. So, the first thing you will want to do is get a Monopoly set. While you have countless options we suggest going for a simple set like the one below.

If you have a particular TV show, movie, or series you like then you could opt for one of those instead. These sets will look different but play in much the same way. The differences are purely cosmetic for most games.

No matter what themed Monopoly set you have, the game-board will usually follow the same basic design. The board will have 40 spaces and the list below outlines exactly how the board will be set up.

Monopoly tokens are your character pieces. Many of these tokens have become quite famous and while they will vary from set to set the classic pieces usually consist of things like the top hat, race car, Scottie dog, and battleship to name just some of them.

You get 16 chance cards in standard Monopoly sets. If you land on a chance space you have to draw a card. Chance cards usually ask the player to move to another square around the board. Hitting a chance space can be beneficial or disastrous depending on the factors at play. Like many areas of Monopoly, it really depends on luck.

You will also get 16 community chest cards in your standard Monopoly set. These cards will normally reward the player with money. However, like chance cards, some can also ask you to move to another space on the board.

This is where things get interesting there are 28 properties in Monopoly. 4 are railroads, 2 are utilities but the remaining 22 are locations. The location properties are split into 8 different colors. Most location properties will have 3 in each color apart from the most expensive which only has 2.

If you land on a location property first you will be able to buy the property deed. This means if your opponent lands on it they will have to pay you a set amount of money. If you manage to get all the location properties of one color you can then develop them further.

This is where Monopoly really becomes a game of strategy. But we’ll talk more about developing properties in the rules and gameplay section below. However, the list below details how the properties are color-coded.

You can’t really play a game of Monopoly without money, can you? In the standard game of American Monopoly money is divided into a number of different bills. Check out the list below to see what is usually included.

In Monopoly, the aim of the game is simple to build the biggest Monopoly possible and cause your opponents to go bankrupt. A game of Monopoly could be over in less than 45 minutes or go on for hours. But on average you should expect a game to be quite lengthy, especially if there are 4 players.

Monopoly can be played with 2, 3, or 4 players and does have a habit of bringing out people’s competitive streak. Some people joke that Monopoly can be a great way to test friendships/ relationships due to the cut-throat nature of the gameplay.

To start with each player should roll the 2 dice whoever rolls the highest will go first. Players move around the board in a clockwise fashion. Every player starts on the Go space and will collect $200 every time they complete one complete turn around the board.

The phrase “pass go and collected $200 dollars” has broken into popular culture thanks to Monopoly. If players roll a double then they can roll again, however if a player rolls a double 3 times in a row then they will automatically be sent to jail.

But this where strategy comes into play because you can own properties without landing on them.

Once you have added 4 houses you can start adding hotels. Up to 4 hotels can be added to a property. By developing your properties you make them more expensive and dangerous to land on. However, adding houses/ hotels does also cost money.

In standard Monopoly rules if you land on a property that hasn’t been bought you will have first refusal to buy it. However, if you can’t or are unable to it will then go up for auction which means other players can bid for it.

You can also open up trades with other players and swap properties between each other. This is where a lot of the strategy in Monopoly comes from. Let’s say you have 2 red properties but another play as the third one.

You could trade them a full set of cheaper properties for it which while costly in the short term could easily pay off in the long term. Some Monopoly strategies say you should simply buy up as much property as possible.

Because even if you can’t possibly develop on it you can stop your opponent from doing so as well. One thing that is commonly agreed upon is that focusing on the location properties rather than the railroads or utilities is the best strategy.

Going to jail is a very real possibility in Monopoly if you land on the “Jail” space or are unlucky in a chance/ community chest pull. If you are in jail you can’t move around the board and will need to use a “get out of jail free” card or roll a double.

After 3 turns you will need to pay $50 dollars to get released. However, while landing in jail might sound like a bad thing one common late-game strategy is to get in jail and stay there for as long as you can.

Under standard Monopoly rules you can still collect money from your opponents while in jail but can’t move around the board. So, there is no risk of you hitting another player’s property but they can still hit yours. It might sound strange but being in jail can be quite beneficial in Monopoly.

One interesting thing about Monopoly is that nearly every household will have their own rules. While many follow the standard rules they often add their own twists to the game. This led to the popularity of house rules.

One common house rule is to add any money collected from the tax spaces to the “Free Parking” space. Normally, this square is considered a safe-zone and nothing happens if you land on it.

But with this house rule, it turns the square into a potentially game-changing jackpot if you land on it during the late-game. There are countless different house rules you can try and you can find many examples online. The game also actively encourages you to add your own as well.

Monopoly is a classic that has endured for decades and will likely be around for a long time to come. It’s incredibly versatile and surprisingly easy to get to grips with. However, there is a lot of strategy involved.

Do you focus on the cheaper properties to try and take out your opponents early or avoid them to go after the more expensive ones? Should you develop hotels or stick to houses? There is no one way to win Monopoly and players will develop their own strategies as they play.

Sure it might test friendships at times but everyone should experience a game of Monopoly with their friends and family at least once or twice.