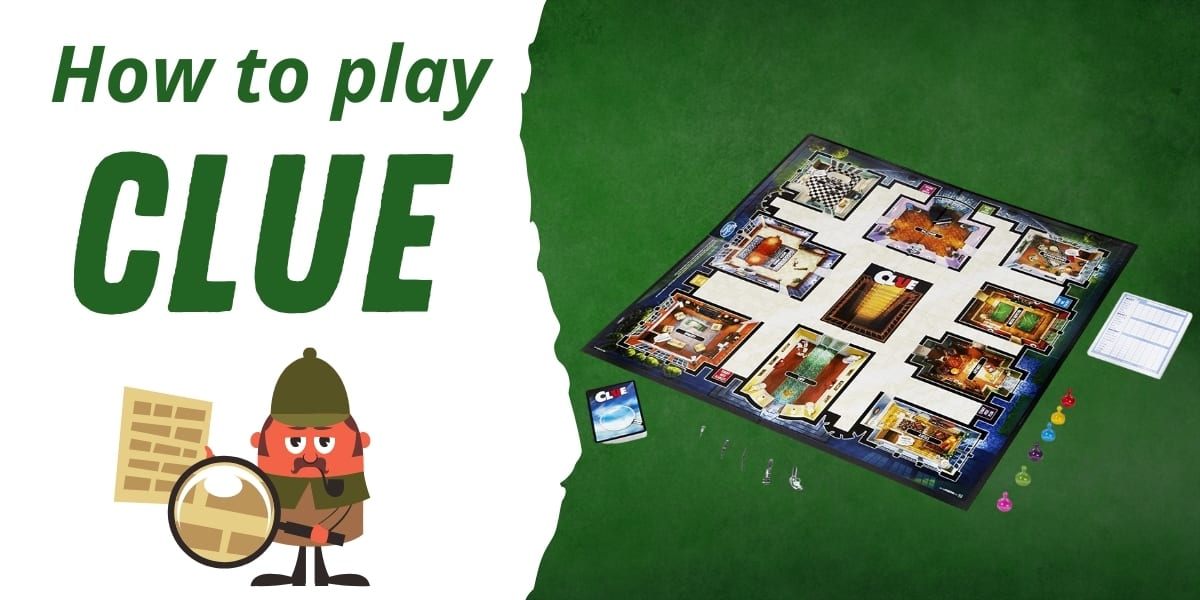 Clue is probably one of the few games that can rival Monopoly when it comes to name recognition. It even has a movie based on it! It’s the original murder mystery board game experience and great fun for all ages. If you want to learn how to play Clue then our guide can help.

Clue might be a classic but it’s also a game many people get confused with. While it’s not a simple game, it’s also not as complex as many people think. While you need to learn how the cards work, Clue is really about deduction.

You have to think like a detective in Clue and use your deductive skills to unmask the killer! So, if you’re ready to learn how to play Clue, read on.

Clue (usually known as Cluedo outside the USA) is suitable for three to six players. The game was devised in 1943 by the musician and inventor Anthony Ernest Pratt. However, it wasn’t until 1949 that the first game sets were manufactured.

Nowadays like many other games Clue is owned by Hasbro and there are many different versions of the game. This includes junior more child-friendly versions, video games, and modern iterations with new characters and settings.

But classic Clue is still most people’s favorite version and the subject of our guide. Now the objective of Clue isn’t simply to determine who the killer is. You also need to know where the crime took place and what the murder weapon was.

With such a rich history, we could talk about Clue’s impact for a long time. But this guide is focusing on how to play Clue. So, let’s take a look at everything you need to know, starting with what you need to play.

Clue doesn’t just rival Monopoly in popularity but also in the number of different versions available. You can find versions based on movies and TV shows like a Star Wars themed set and special edition retro sets.

But since you are learning how to play Clue for the first time we suggest sticking with the original, basic set. The product below showcases exactly what you should be looking for. While most other themed sets are just cosmetic differences, learning the game with the standard set is always going to be the better option. 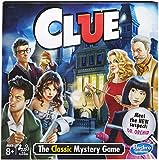 When you open up the box you might be a little overwhelmed by the amount of equipment in Clue. But don’t worry this is much easier to get to grips with than you might first think. To understand what each piece does follow the subheadings below.

The characters of Clue are likely one of the main reasons for its enduring popularity. The characters are archetypes of well-known stock characters like the grande dame or femme fatale.

There are six characters in Clue and what makes things even more interesting is that they are all suspects as well. While the names have changed slightly over the years, you can usually expect to see the following characters.

The murder weapons are another important part of Clue since you need to uncover how the victim was killed. Just like there are six characters/ suspects there are also six weapons. These weapons have remained largely unchanged in the traditional Clue set. The list below details each of the weapons.

In traditional Clue sets, each weapon will have its own miniature token and a corresponding card.

The game board in Clue is styled after a gothic mansion and usually called Tudor Hall. While the design has varied over the years many of the rooms are the same. You can use secret passages to travel more quickly around the mansion and each player will start at a different location.

Color-coded starting squares highlight where each character starts. The list below details the room names you can expect to see on a classic Clue board.

Like the weapons and characters, each room is represented with a card as well. Alongside these nine rooms, they’ll also be a central room that is inaccessible to players. This is usually called the attic. This room holds the secret envelope, which nicely brings us to the next section.

Included with every classic Clue set is the mystery envelope. This envelope holds one character card, one weapon card, and one location card. Together these cards are the answer to the crime you are trying to solve.

Namely the identity of the killer, the murder weapon, and the location of the crime. You will also have a small notepad called the detective’s notes. Each player should have their own notes page to help them keep track of what they’ve uncovered during the game.

The aim of Clue is to solve the case! You need to work out who the killer is, where the crime took place, and finally, what weapon was used. Each player moves around the board from room to room collecting clues to uncover the truth.

However, when you combine the number of characters, weapons, and locations on the board you end up with over 300 different possibilities! So, to solve the case first, you need to whittle down the possibilities.

One of the main problems people have when it comes to learning how to play Clue is that the initial setup can be a little confusing. But this is what you do. To start with each deck of cards should be carefully shuffled.

Then one character card, weapon card, and room/ location card are chosen at random. The cards should then be placed inside the secret envelope. Make sure no one sees the cards before they are placed in the envelope.

The cards in the envelope are the answer to the crime. Then the remaining cards should be shared out amongst the remaining players. Once this is done each player should choose their character.

Once this is done each player should roll the dice and the player with the highest number will go first. Play then continues clockwise from this player. Each player will roll the dice on their turn to move around the board from room to room.

On your turn you should start work deducing the identity of the killer, the murder weapon, and the location of the crime. To do this you should enter a room on the board and then make a suggestion to the rest of the players.

For example, if you want to say the murder took place in the library, you will need to move your character token to the library first. Once you make a suggestion the character and murder weapon you suggested will be instantly moved to that room.

If no player can disprove your suggestion then play continues as normal. The idea is to use suggestions to work out which cards the other players have. Once you know which cards they have you can work out what weapon, location, and character cards are in the mystery envelope.

One important thing to remember is that you can’t camp out in one room repeatedly making suggestions. If you do want to make another suggestion about the same room you must first move out of it and then go back in.

If you think you have determined the right location, character, and weapon for the crime then you can make an accusation on your turn. Unlike a suggestion an accusation can be made without you being in the room you want to name.

Once you have made the accusation you must privately check the cards in the secret envelope. If you are right then you can show the other players and you have won. If even one card is wrong then you have lost by making a false accusation.

If this happens you must return the cards to the envelope and you are effectively out of the game. You can no longer make suggestions or accusations but other players can still name you in their suggestions.

You will also need to still be in play to disprove other player’s suggestions if you can. If every player (apart from the last one) makes a false accusation then the remaining player automatically wins. This is unlikely to happen but is a safety measure to ensure someone wins.

Since you essentially only get one chance to make a successful accusation, you need to be certain you are right. This means you will need to try and deduce as much as you can by moving around the board and making suggestions.

While there are other mystery board games available these days, Clue is the classic choice! It’s challenging and will really get your brain working. If you’re looking for a thrilling mystery board game then Clue will always be a great choice.