Looking for something to fit the theme of your spookiest game night? Check out this overview of Betrayal at House on the Hill rules to plan your evening.

Explore a cursed house with a small band of friends – then, try to survive when one of those friends turns on you in Betrayal at House on the Hill. This game is bursting with B-movie horror flavor. And it’s best enjoyed with a group that buys all-in to the role-playing aspects of the game.

The rules and mechanics are simple once you get going, and a lot of what happens is left up to the will of the dice. That makes this the perfect game for a social evening get together.

In this article, I’m going to walk you through the basics of how to set up and play a round of Betrayal at House on the Hill.

Oh, and watch your step. Sometimes the floor has a way of falling out under you in these old houses.

Betrayal at House on the Hill Rules 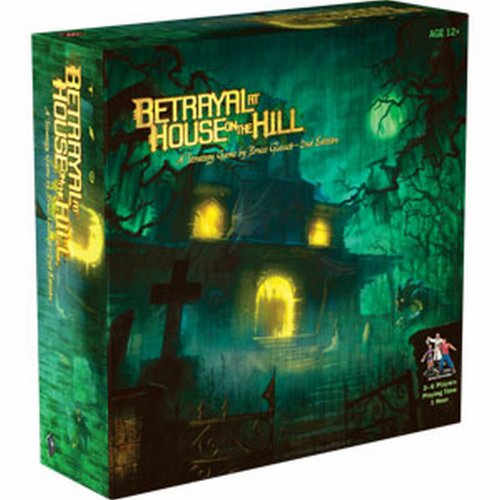 In the box for Betrayal at House on the Hill, you should find:

2. The Basic Idea and Game Objective

Betrayal at House on the Hill lets you step into the world of B-movie horror. There are two distinct phases of the game.

First, you and the other players will explore the house, placing down tiles and sometimes picking up cards from the three decks (Omens, Items, and Events).

In the second phase, the horror aspect of the game becomes more apparent as your intrepid heroes must band together to survive one of fifty Haunt scenarios.

All of you, that is, except one. That’s right! This game is only mostly co-operative.

One lucky player will be named the traitor, receiving their own set of goals.

You don’t know who this player will be until someone triggers the Haunt scenario.

This makes it hard to trust each other too much in the early part of the game.

Any player could be the person trying to kill you after the Haunt begins!

3. Setting Up to Play 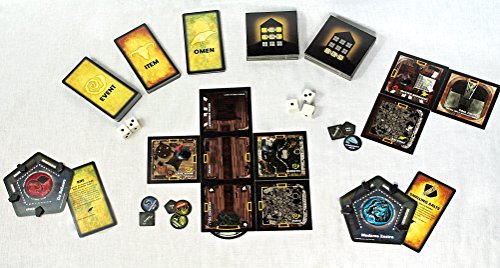 There are six Character Cards, each with two explorers to choose from (the cards are two sided).

Find the mini that corresponds with your Character Card (the color should match) and place it on the Entrance Hall tile.

Notice that each character lists four primary abilities: Might, Speed, Knowledge, and Sanity.

Your character’s starting ability scores are highlighted on your Character Card.

The game provides markers you can attach to the Character Cards to track these scores as they change.

If you find the markers hard to use, and you probably will, you can also track your ability scores with paper and pencil.

Do you have everything set up and ready to go?

Then it’s time to…

5. Enter the House on the Hill

The character with the next birthday (it’s on the Character Card!) will go first, moving clockwise around the table from there.

On your turn, you can move your character a number of Room Tiles equal to your Speed. You can pass through doors – these are marked with yellow outlines on the Room Tiles.

When you pass through an unexplored door, draw a Room Tile and place it next to the room you are moving from.

A few important notes about drawing and placing these tiles:

There are a few special tiles, with rules printed on them describing their unique effects.

Your turn ends either when you run out of moves or you discover a room with a symbol on the tile.

The symbols correspond with one of the three draw piles – the bull’s skull for Items, the spiral for Events, or the raven for Omens.

Drawing a room tile with a symbol means you will draw a card from the matching pile.

No matter what you draw, read the card text out loud to the table.

Items might be one-time use cards that give you some bonus or advantage the turn you use them. They could also be equipment such as armor or weapons to improve your fighting abilities. Keep your item cards in front of you to keep track of what you’ve found.

Events are cards that make something happen right away. This might require some rolls on your part to avoid a bad outcome. Once you do what the card says, you discard it unless it says otherwise.

Omens could be a good or a bad thing for your character, but no matter what you draw it will bring you one step closer to the Haunt. Every time you draw an Omen card, at the end of the turn you make a roll to determine if the Haunt occurs. If the result of the roll is less than the number of Haunt cards drawn throughout the game so far, the second phase will begin!

This is where it gets interesting.

It wouldn’t be Betrayal at House on the Hill if there wasn’t going to be, well, a betrayal.

Once the Haunt roll is failed, consult the chart provided in the forbidden Traitor’s Tome. This will reveal the scenario you will play, as well as the identity of the traitor!

Check the Room Tile you are in and the Omen card you drew to trigger the Haunt. Line them up on the table for your scenario number. This scenario will tell you how to determine who the traitor is.

Check out: More recommendations for the Best Mystery Board Games

Let’s be honest, this is what you’re here for. This is why you wanted to play a game called Betrayal at House on the Hill.

The traitor takes the Traitor’s Tome and leaves the room to plot the downfall of their “friends”. If this is you, you’ll turn to the Haunt scenario number in your Tome and read up on your new objectives.

As the traitor, you will be gaining some special benefits in the second phase of the game, allowing you to:

Congratulations, if you’re one of the remaining players, you’re the heroes now!

The heroes get their own set of objectives to complete in order to escape the house on the hill. Take some time to read through the scenario in your Secrets of Survival book and come up with a game plan!

Once the Haunt begins, the turn order resets – starting with the player to the traitor’s left and moving clockwise.

A few special Betrayal at House on the Hill rules to note for the traitor when controlling the monsters:

Instead of moving their maximum speed, you must roll a number of dice equal to their speed. The result is how many tiles they can move that turn.

Most monsters can’t be killed, instead becoming stunned if they are damaged in combat. Flip their token over until their next turn, then skip that turn when it comes and turn the token back.

Monsters also slow heroes that attempt to move past them. To leave a room with a monster in it, a hero must spend one extra movement.

The remainder of the game is the real action, with the heroes and the traitor both vying to complete their objectives first. The heroes want to escape. The traitor wants them dead.

Hopefully, you gathered some good items earlier in the game; you’re going to need them here.

This may also be a good time to warn the heroes that the traitor might not know your objectives. Be careful what you say around them.

At this point in the game, you can also Attack enemies on your turn.

Combat is resolved by rolling a number of dice equal to your Might score and adding up the results.

Your target also rolls, and the difference between those two results is how much physical damage the loser takes.

This means combat can be risky – if you choose to attack, you might take damage if you lose!

When you take physical damage, reduce your physical ability scores (Might or Speed, split how you choose) by that amount. Yes, this means that as you start getting beat up, you get easier to beat up.

If you are reduced to a score of zero in any ability, your character dies. All your items are dropped on the ground if anyone is brave or foolish enough to try to retrieve them.

It’s important to note that killing the traitor isn’t a win for the heroes. If the monsters can still complete the Haunt objectives, the traitor’s player continues to run them.

The game ends when either the traitor or the heroes complete the goals set out in their scenario guides.

So if you’re looking a game in the Halloween spirit, look no further!

Betrayal at House on the Hill is exactly the dose of campy horror your next game night needs.