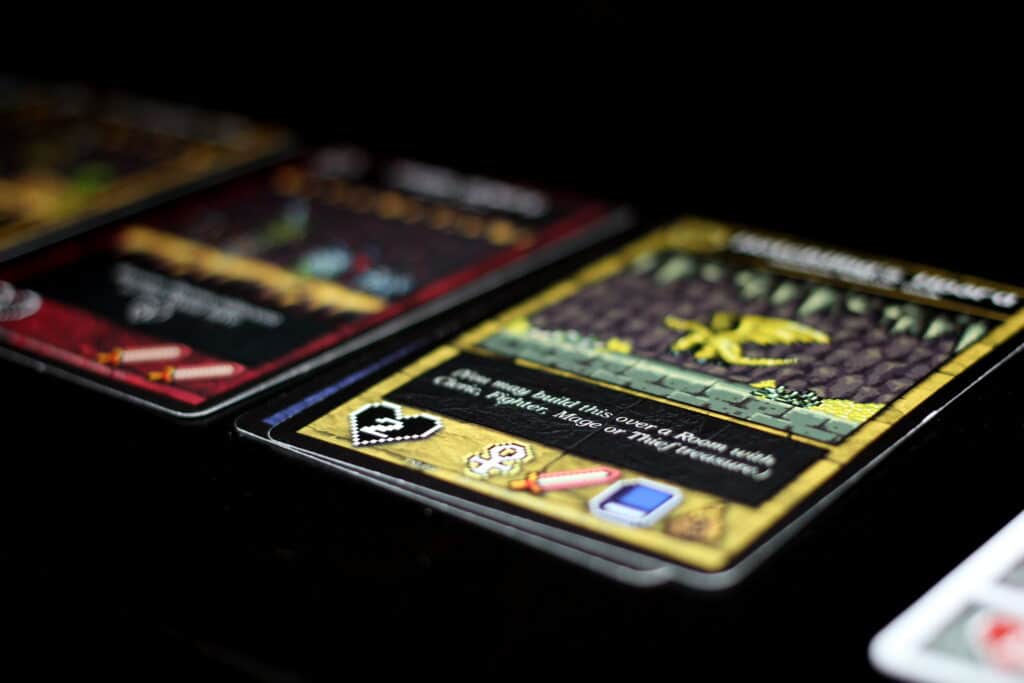 Looking for a game that will satisfy your need for retro gaming nostalgia?

Then you can’t go wrong with the Boss Monster card game.

I actually had an opportunity to play this game a long time ago, back when it was just released after a successful Kickstarter funding session.

I bought the game as a gift for my brother and loved the unique play-style, which celebrates both luck and creativity.

With this title, you get to try your luck as a boss from a game dungeon.

Players defend their lairs from pesky heroes who attempt to steal their treasure with magic spells, monsters, and more. 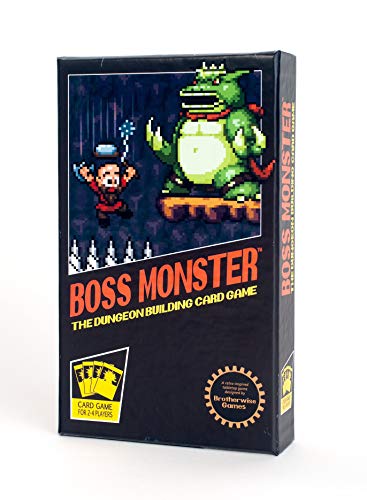 The Boss monster card game is all about making the most of the cards in your deck. As the monstrous boss of a traditional looter dungeon, you need to construct a lair that can be up to five rooms in size.

Each round, you’ll be able to play a new dungeon room, and attempt to entice adventurers into your lair.

If you manage to kill the heroes that come to your dungeon, you get their soul.

Sounds a bit morbid, but if you get 10 gem-encased souls for your dungeon, you can call yourself the winner of the game.

There’s not much to the game at first glance – just a deck of cards.

However, the Boss Monster card game crew did an excellent job with their artwork. 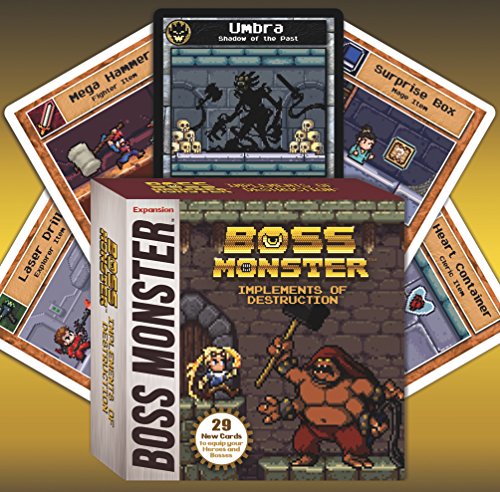 The box itself looks like a Nintendo cartridge – ideal for gaming nerds, and the layout of the cards is stunning too.

There’s something about the intriguing 16-bit style of Boss Monster that really appealed to me when I opened this kit for the first time.

Maybe it’s just because the game takes you back to your childhood, but I think that any gamer is sure to fall in love.

Additionally, the cards are well-designed, with instructions to guide you through how to play with ease. 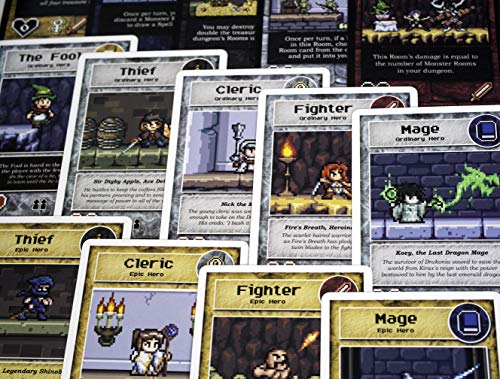 So, how do you actually play Boss Monster when you’re ready to start collecting souls?

Well, as mentioned above, this is a card game, but there’s more to it than that.

In Boss Monster, you get to be the evil guy ready to destroy heroes who dare to enter your dungeon. Players gain points by killing heroes and building dungeons that specifically counteract the abilities of the people who invade.

In some cases, you can even manipulate strong heroes to invade the dungeon of an opponent so that you’re more likely to win.

The Boss Monster card game isn’t complicated. You start with a random boss monster that comes with a few key abilities.

From there, everyone gets 5 random room cards and 2 spell cards. You’ll need to discard two of the cards in your hand, then you can begin building your rooms.

Since the Boss Monster game has been around for a while now, there are also a handful of add-on games out there too, such as:

You can even check out Boss Monster 2 if you love the first game enough. 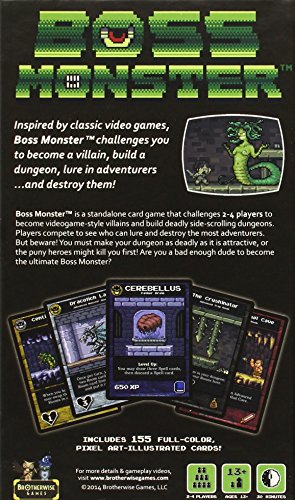 The Boss Monster card game works over a series of rounds broken down into three phases, starting with the build phases.

When you first begin the game, you reveal the heroes in the town (one per player) on the board, and each player starts to plan for the adventurers that are coming to their lair.

All players draw a room card and pick one to play. There are three types of room available: Monster, Trap or Upgrade.

Rooms need to be played either on top of an existing room, or to the left of a previously played room if you don’t have a total of 5 rooms yet.

Your lair can only have 5 rooms in total.

Once the build phase is complete, there’s also a bait phase. After all, most heroes aren’t going to come to your dungeon if there’s no reward in it for them.

Each of the four kinds of adventurer: Cleric, Rogue, Wizard, and Fighter, has a specific sort of treasure that they want. Each of the rooms you build for your lair will have a specific treasure attached to it.

The more symbols you have for a certain kind of treasure, the more heroes of a specific type you’ll attract to your dungeon.

If there’s a tie between the amount of treasure that you and another player has to offer, the hero will remain in town until the next round.

Finally, the third phase is the “adventurer” phase. During this stage, the heroes that were lured to a dungeon will attempt to make their way through the lairs, one room at a time.

Rooms usually come with a damage value or a special ability.

If you do enough damage, you’ll kill the adventurer, and collect their soul. On the other hand, if the hero gets through your dungeon, you’ll be dealt a point of damage.

A dungeon with five points of damage automatically loses the game.

The Boss Monster card game is a pretty basic way for gaming enthusiasts to have fun without having to use any electronics.

With this title, you’re sure to have hours of fun creating unique dungeon environments to kill off the heroes that dare oppose you.

Although the nostalgic appeal won’t last forever, the game itself is pretty immersive, and the fact that there are now plenty of expansions available to upgrade your gaming experience means that you won’t get bored any time soon.