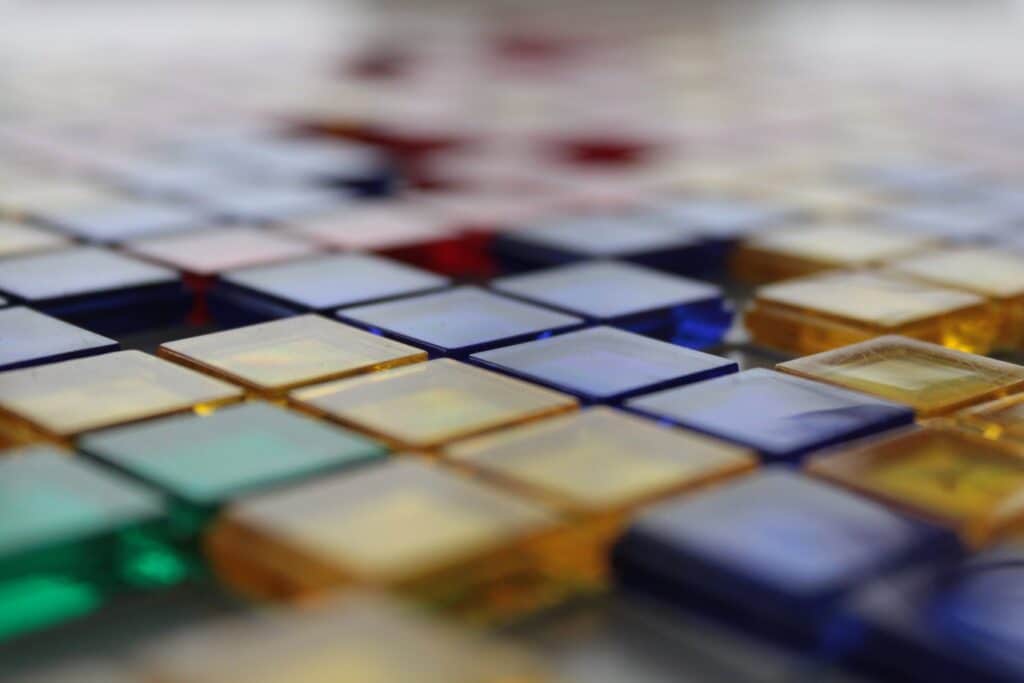 Have you ever had a family game night where every game you tried to play was either so simple that none of the adults could enjoy themselves, or so complicated that none of the kids could keep up?

If so, you’re not alone.

If you’re in the market for a board game that has enough strategic depth for endless replayability, but is simple enough that a child can learn it, look no further than Blokus.

A game of interlocking multicolored pieces called polyominoes, Blokus is all about placing your pieces down on a grid-based play board.

The Blokus Board & Pieces

The Blokus board is a grid of 400 equal sized squares in 20 rows and 20 columns.

The polyomino game pieces are composed of one to five squares arranged in a multitude of patterns.

There are five different kinds of polyomino featured in Blokus, each with one to five individual squares.

Double square pieces are called dominoes, a word (and shape) you probably recognize.

Triple square pieces can either be called trominoes or triominoes.

There are two possible arrangements of tromino, an elbow and a straight line.

There are five possible tetrominoes, and you might remember their shapes from the popular video game Tetris!

Finally, pentominoes, pieces with five squares, are the largest ones in Blokus.

There are 12 possible pentomino arrangements, and you’ll have to deal with every one of them if you want to win!

There are polyominoes larger than five pieces, but none feature in Blokus.

How To Play Blokus

To set up, have each player choose a color. Blue goes first, followed by yellow, then red, and green goes last.

Each player should have 21 colored pieces, one for each polyomino featured in the game.

The first piece played by every player should be placed in their respective corner of the board.

After that, pieces may be placed in any open spot, so long as the corner of the new piece is touching the corner of one of your previously placed pieces.

Pieces can only be placed where they are touching corners with another piece of the same color.

Note, however, that only corners are allowed to touch. Edge to edge contact between two pieces of the same color is not permitted.

When it’s your turn, place any of your pieces down on the board somewhere there are no other pieces.

As long as it fits in the available space, and none of its edges touch any of your previously placed pieces, it’s a legal move.

Play continues clockwise, with each player taking turns placing one individual piece or else passing their turn.

Eventually, players will either begin to run out of pieces, or run out of open spots to place their remaining polyominoes.

In order to win the round outright, a player must be the first to place all their pieces on the game board.

If the final piece played is a monomino (one square), the player is awarded a 20 point bonus. Going out on any other piece awards a bonus of 15.

If play goes around the table and no one can play any more of their pieces, the game ends, and each player should count the individual squares in all of the pieces they were able to place on the game board.

The player with the highest total is the winner. 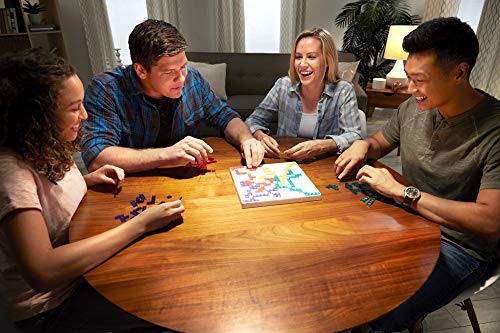 In the early game, most players tend to emphasize placing their larger pieces.

Playing your large pieces early means you will have plenty of space to fit them, and are much less likely to lose out on those points come the end of the game.

Playing your small pieces is worth less points, but as the board fills up, smaller pieces can often be the only ones that fit in the remaining spaces. Thus, it makes more sense to save smaller pieces for the end of the round.

At the same time, it’s extremely important to pay attention to what your opponents are up to.

Placing your own pieces to disrupt your competition’s plans can force them to use small pieces early on, or even to miss out on placing their large pieces.

Always keep an eye on what everyone else is doing!

Though Blokus is designed with four players in mind, there are variants for two or three player games as well.

Playing a two player game in Blokus is fairly straightforward.

Each player is given two colors, and must play both of them.

To get their point bonus, going out with either color awards bonuses as normal, but play continues until no one can place any more pieces, or a player has played all of their pieces for both of their colors.

As a variant of the two player rules, play ends when any color goes out completely. Both players add up their point total, with one sum for both colors.

This variant can bring up surprising results, where despite not being the one to place the final piece, players win with higher overall point totals.

In other words, in this variant of Blokus, adding up the point totals of the second and third place colors can sometimes beat those of the first and fourth places!

To play with three players, decided on a neutral color. Before regular play begins, take turns placing the neutral color randomly throughout the play board.

The neutral pieces should be placed as obstructions for all players. Do not place them in such a way that one player has a clear advantage over the other two in terms of open spaces in their corner of the board.

Other Variants of Blokus 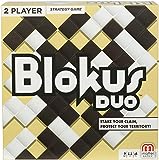 Blokus Duo AKA Travel Blokus: A two player version of Blokus, this version uses a smaller game board and only two colors. Starting pieces are placed in the center of the board rather than at the corners since there are only two players.

These two factors combined means that players start running into eachother’s pieces sooner in the game. This forces more offensive strategies on both players’ part, and makes for a faster-paced, more competitive experience than standard Blokus.

Blokus Trigon: This version is similar to the original Blokus in terms of strategy and rule set, but features triangle-based game pieces and a hexagonal grid game board rather than the square grid and game pieces of the original game.

Blokus Giant: This larger-than-life version of Blokus is exactly what it sounds like.

Colors and rules are the same as the standard game, as is the play grid, but both are larger in scale.

The only difference to this version is the size of the game board and polyomino game pieces, making it perfect for small children or people with poor vision.

Blokus Junior: The children’s version of Blokus is a two player experience, similar to Blokus Duo. The rules are the same as regular Blokus for this version.

The only difference is in the variety of game pieces.

To help children understand the rules and engage with the strategy of the game, a smaller, simpler variety of polyominoes is used for each color.

Since its release, Blokus has been a favorite of teachers and daycare workers for its use as an educational tool. It’s a game where you have to plan, visualize, strategize, and try to outwit your opponents, and it’s that depth that has turned Blokus into a sensation.

Whether you’re a parent looking for a fun way to help get your kids’ brains working hard or just looking to add a fun, competitive, and strategic party game to your board game collection, Blokus might just be exactly what you’re looking for!