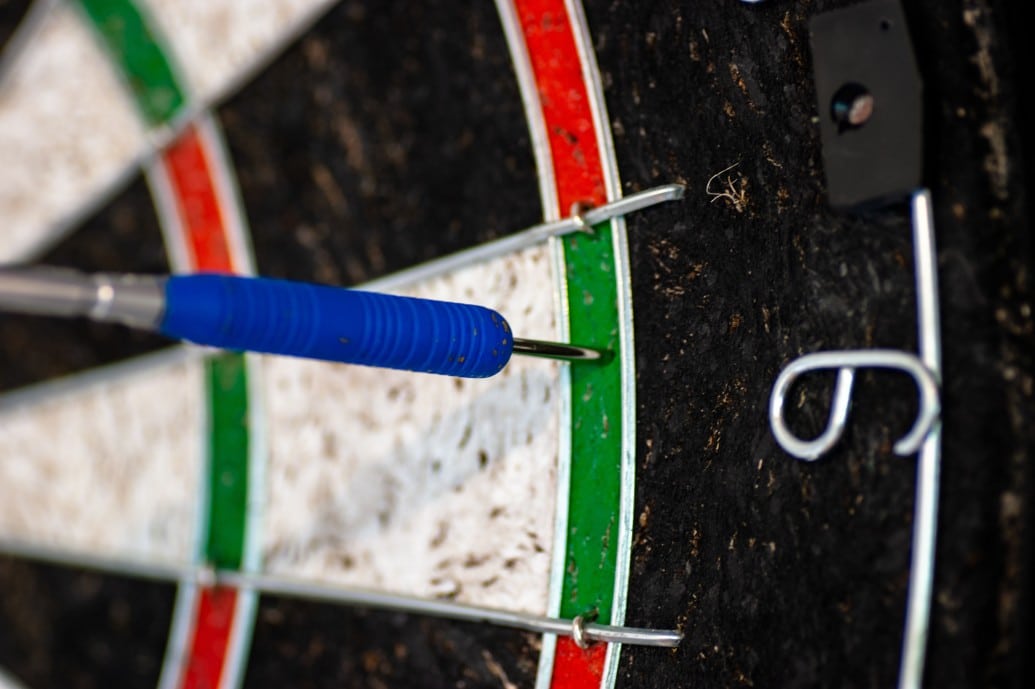 We’ve said it before and we’ll say it again: Darts can be a tough game to get good at. So tough, in fact, that it can be pretty off-putting to those new to the sport.

Learn how to play baseball darts, however, and you’ll not only learn a fun game that can provide hours of entertainment, but also a useful practice exercise that can help players of all abilities to hone their skills and fine-tune their technique.

Not to be mistaken with dartball, which often uses a diamond-shaped board laid out like a baseball field, baseball darts (sometimes referred to simply as ‘baseball’) gets its name from the fact that it is structured into separate “innings” just like those found in America’s favorite pastime.

Below, we’ll talk you step-by-step through the process of learning how to play this enjoyable darts game, and outline everything you need to know to get you scoring as many runs as possible in no time.

If you already have a dartboard and a decent set of darts at home, then you’ve already got everything you need to play baseball darts.

The only other thing you may want to consider getting your hands on is a scoreboard but, honestly, jotting down the scores on a sheet of paper or even on your smartphone will do the job just as well.

However, if you’re buying a brand new dartboard for the sole purposes of playing baseball darts, then you might want to shop around for one with a special ‘baseball dart layout’ on the reverse side such as this Hideaway Cabinet & Steel-Tip Dartboard Ready-to-Play Bundle from Viper.

That way, you’ve got a ready-made layout to play the game while still having a normal dartboard on hand to play by the traditional rules.

How to Play Baseball Darts

Though you can technically play baseball as a solo darts game, it’s usually much more fun to get your friends round and break off into teams, or at least the very least, rope in one other player for some one-on-one competition.

In keeping with the baseball theme, your next task is to determine which of your two teams is going to “bat” (throw the darts) first.

As you would when playing any game of darts, this is done by having a representative from each team step up to the line and throw a single dart at the board.

The player who gets closest to the bullseye and their team gets to go first.

The Aim of the Game

Once the game begins, players from each team take it in turns to throw their darts at the board and score points. Whichever team has scored the most points at the end of nine rounds (called ‘innings’) wins the whole game.

So far, so simple, but how exactly do you score those points and what does any of this have to do with baseball?

To explain that, let’s take a look at the rules:

The Rules of Baseball Darts

Baseball darts is played over a series of nine rounds, called innings.

For each inning, players take it in turns to throw their three darts, aiming for the number on the dartboard which corresponds to that inning.

So, for example, in the first inning, players will all aim for the number one segment on the board, in the second round you’ll aim for number two, and so on.

If you get your darts into that section, you’re awarded points which, in keeping with the baseball theme, are referred to as ‘runs.’ Runs awarded as follows

So for each round, there are a potential nine points up for grabs if you’re skilled enough (or perhaps just flukey enough!) to hit the triple with each dart.

If your dart lands anywhere outside of the appropriate section for that inning, it is considered ‘out’ and you don’t get any points.

How to Keep Score

If you already have an electronic darts scoreboard, it’s worth checking whether it’s programmed to calculate scores for baseball as well as scoring for traditional darts games.

Though some of the cheaper models tend not to include this feature, the benefit of top quality varieties like the Arachnid Touch Pad Dart Scorer is that they can keep scores for dozens of different games including baseball darts.

If yours does have this feature, then keeping score is no more difficult than selecting the right game and inputting the scores for each player as the game goes on.

If you’re doing things the old fashioned way, however, then the best way to keep tabs on the scores is to draw up a chart with the names of each player across the top row and the number of each inning running vertically down the far left-hand column.

As the game progresses, you can then simply add each player’s total point score underneath their name for the appropriate round, then use a row across the bottom to add their total score.

Once all nine rounds have been played, add up the total scores for each player on a team, and the team that has the most overall points gets to break out their victory dance.

What to Do in the Result of a Tie

Though it may be rare to reach the end of all nine-round with the scores perfectly tied, it does happen from time to time.

If you don’t want to end your game on a draw, the easiest way to determine the undisputed winner is just to play extra innings.

Play the tenth inning with players aiming for number 10 on the board, and if that doesn’t settle things, keep going through the 11th inning, 12th, and onwards until a definite winner is decided.

If you manage to go all the way to the 20th inning and the scores are still tied then you’ve got two options:

Call it a day and accept the unique honor of having just played the longest game of baseball darts in history, or;

Keep going into the 21st inning, once again using the number one on the board as your target.

If things have been getting a little too easy for you, you can always choose to play a variation of the standard baseball dart rules by throwing in what’s known as the ‘7th inning stretch.’

Although named after the long-standing tradition of baseball fans taking time to stretch and move around in between the two halves of the seventh inning, the ‘7th inning stretch’ isn’t the time to get up and get yourself a snack.

Instead, it refers to a somewhat cruel rule which mandates that all players must score at least one run during the seventh inning. If they fail to do so, their total score up to that point will be cut in half.

Though that can be harsh -and sometimes completely heartbreaking for some players- it can be a great way to make things more interesting and up the stakes.

How to Play Baseball Darts on a Specialist Dartboard 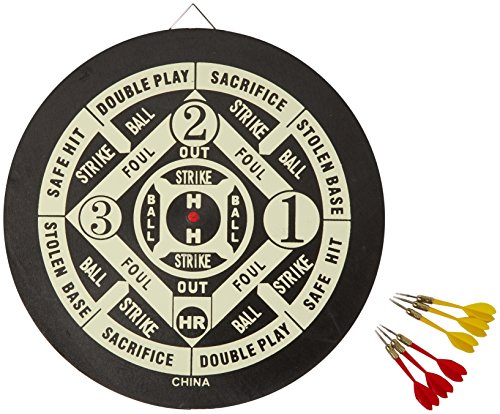 If you did buy a dartboard with a baseball darts layout on the back, then you’ll find that the rules are a little different and do actually have more in common with the traditional game of dartball.

Here, your objective is to score a run by making it around the first, second, and third bases and finally back to the home plate by hitting each one with your darts.

If you miss, your dart could land in one of the sections which are labeled with standard baseball terms such as “foul,” “strike,” and “out,” with the same rules applying as they would in a baseball game.

If a player successfully scores a run, his team gets a point and the next player on the team follows. This goes on until the team makes three outs, at which point the other team steps up to take their turn.

As with regular baseball darts, the team who has scored the most points by the end of the ninth inning win the game.

Baseball Darts: A Game Everyone Can Enjoy 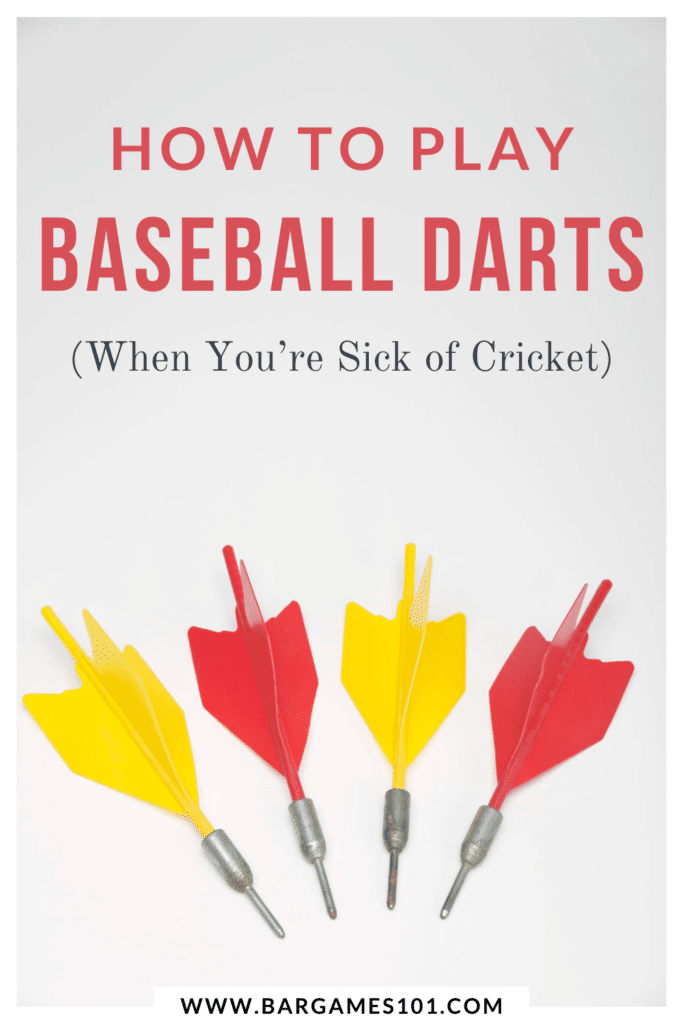 By far the thing we like best about baseball is that it really is a game for all skill levels.

While the simplistic scoring can be a great way to introduce newcomers to the world of darts, even experienced players will find themselves seriously challenged when it comes to hitting those double and triple point scores that can often make all the difference between winning and losing.

So, whether you’re looking for a fun way to introduce some dart newbies to the game, or you’re simply looking for a way to liven things up the next time you get together with your fellow dart-playing buddies, why not break out those darts and see how many runs you can score? 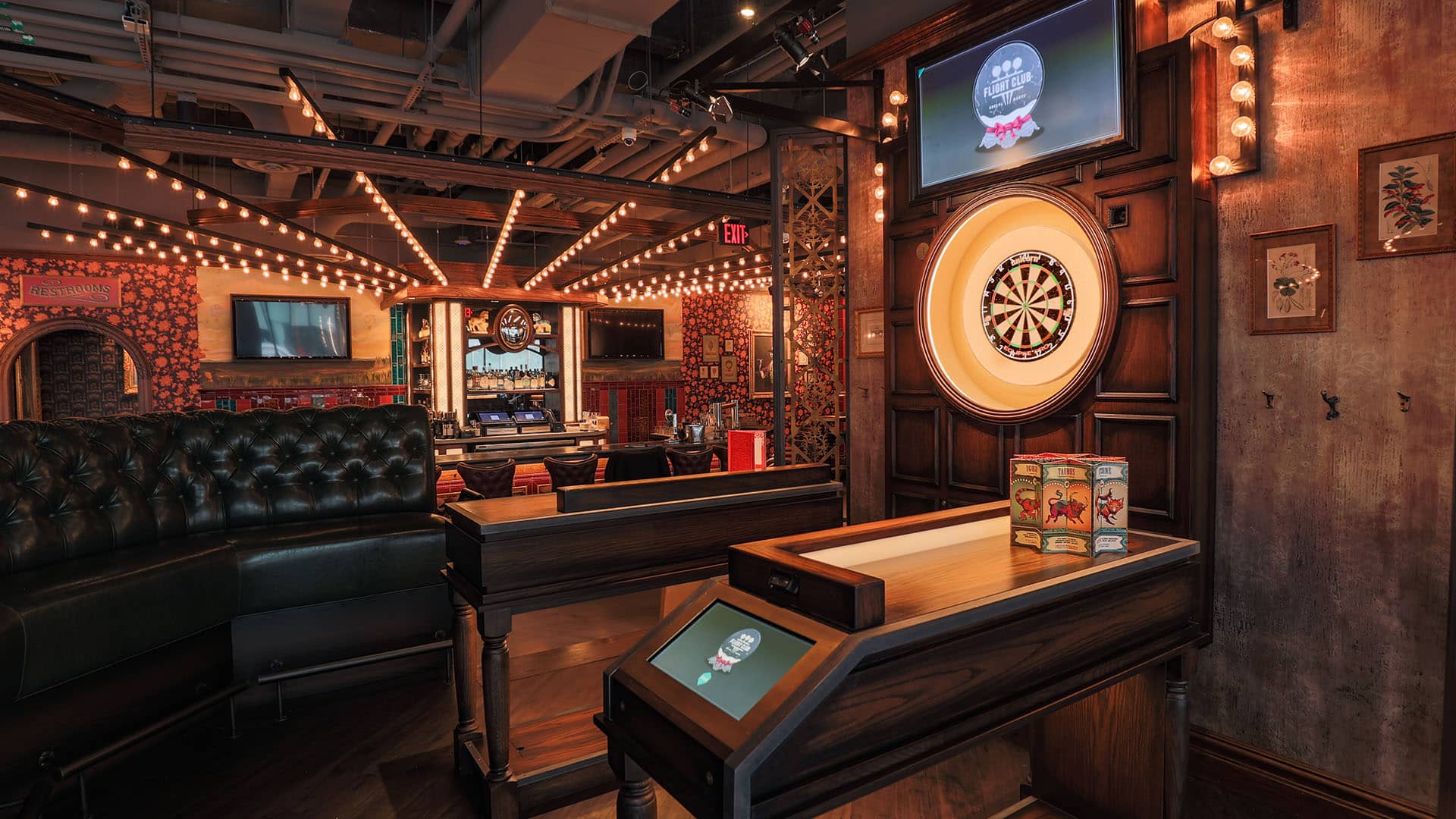 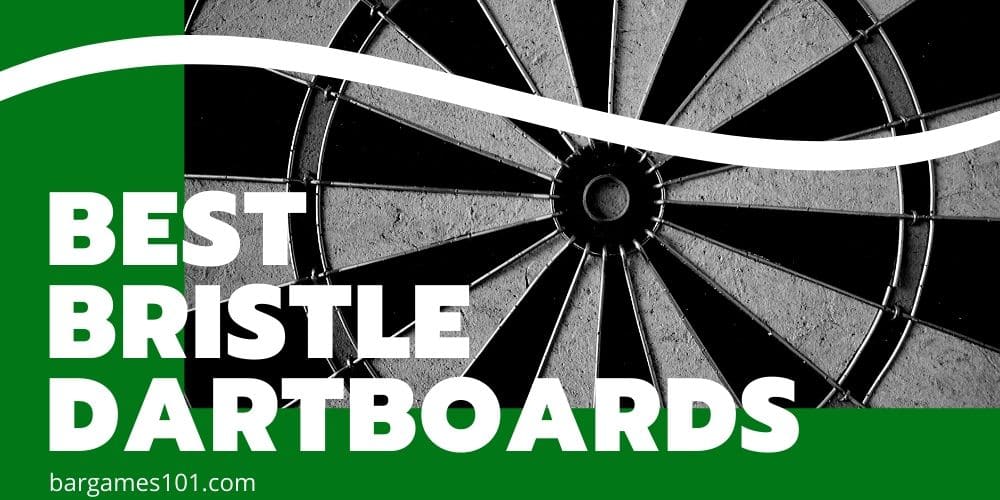 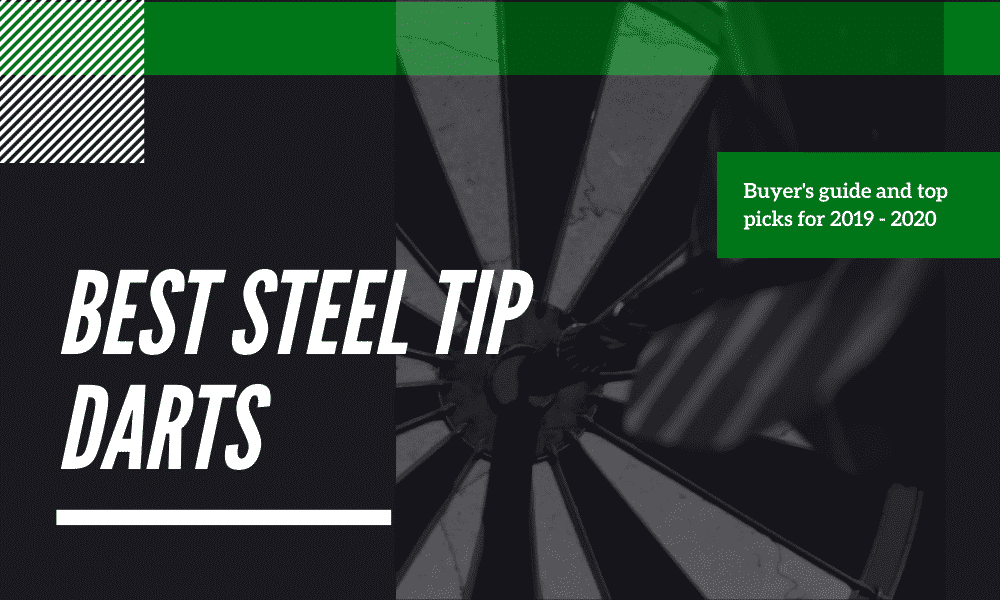 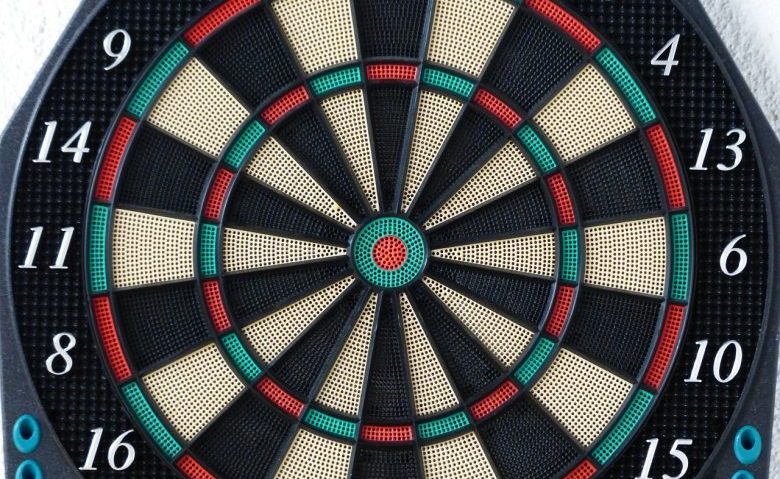 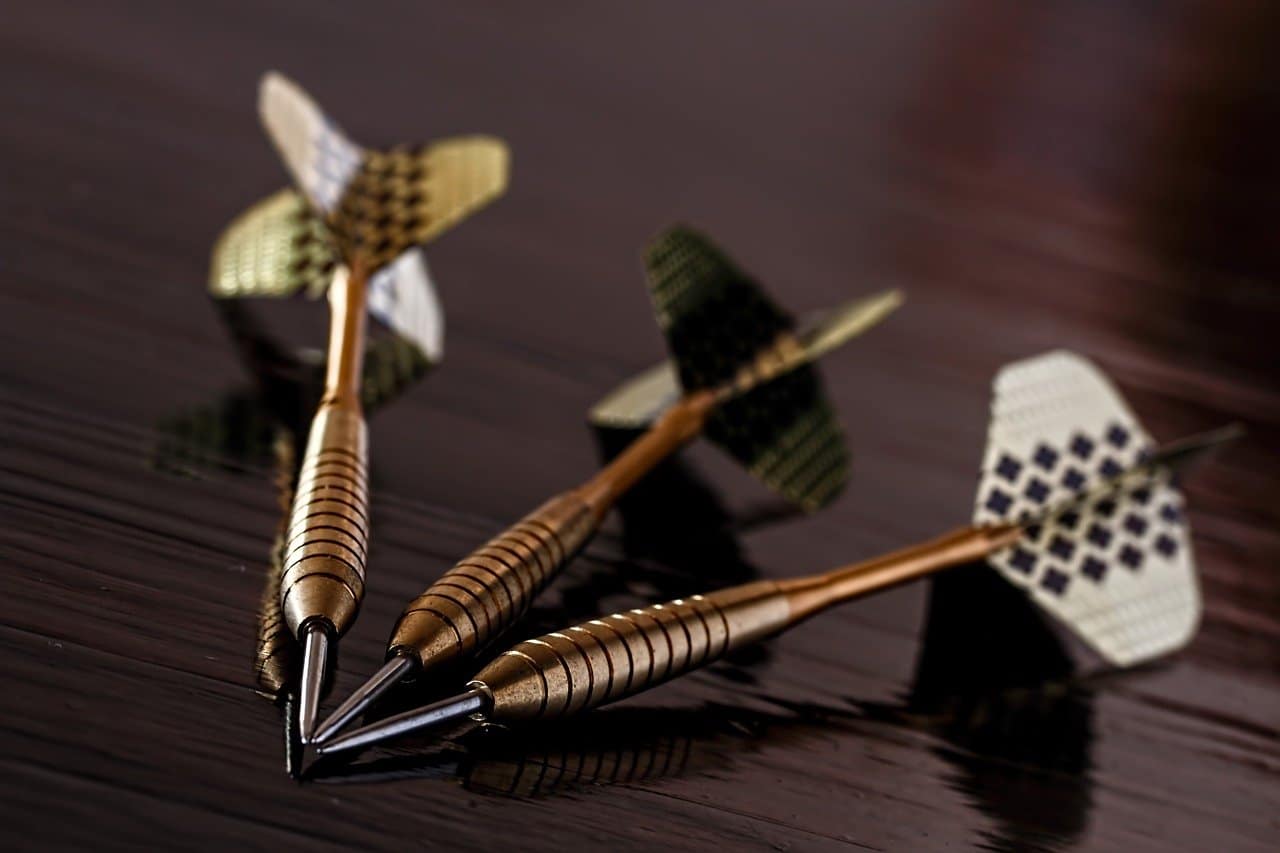 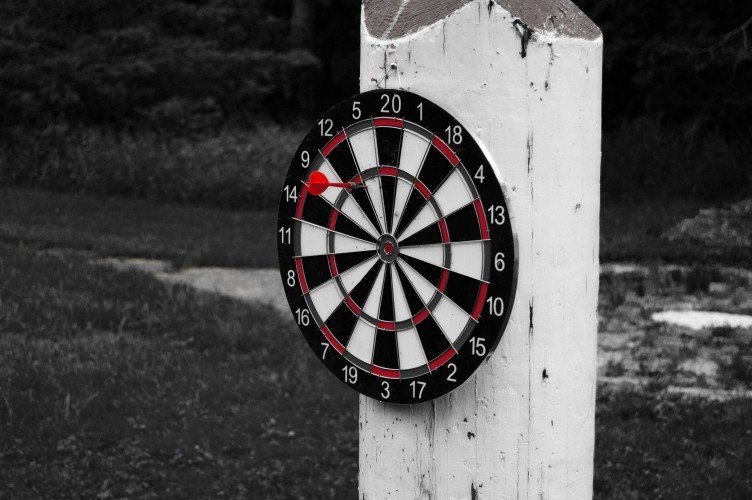