HOBBES is a party game for adults with a sense of humor about life. There are many party games out there, but you will likely find this board game to be much different.

This is a game about (not “of”) life – random things that typically occur during different stages of your life and in today’s society in general.

You and your friends and family will share laughter, either at your expense or others’ at the table.

The objective of the game is to end up with the most remaining points after being slowly and methodically reduced by life’s joys.

In this game you can attack your opponents by sticking them with point losses in an effort to maintain the highest score to win.

Ultimately, the game creator believes, you should have a philosophical perspective on life, articulated by some of the greatest thinkers the world has ever known, to lift you above your embattled existence.

The game contains classic words of wisdom for you and other players to pause and reflect on, and hopefully calm your troubled souls.

HOBBES plays best with a large group of friends and family who are familiar with one another’s foibles, habitual behavior and past history. The creator thought that the Game of Life, that old classic, does not really capture the essence of life experience in modern society.

There is a need for a game about life – things that really happen to people throughout various stages of their lives, but cast in a humorous way.

Philosophy is another major component to the game because it serves to help people deal with realities that are unwelcome in their lives.

Put together, you have HOBBES – A Board Game About Life, inspired by that famous quote by 17th century English philosopher Thomas Hobbes that life is “solitary, poor, nasty, brutish, and short.”

The joys of life – whether self-inflicted or imposed upon you – depicted in the cards are all tongue-in-cheek, of course, and written in shades of light and dark humor and at times with doses of sarcasm.

“Jaded adults” is the main audience, but anyone who thinks he or she has seen a thing or two in life can enjoy the game.

Check out more of the best board games to play with your friends. 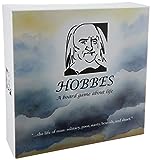 The object of the game is to end up with the most remaining points in life.

Proceed through the major stages of life on the game board, draw cards and take your hits, deducting points along the way.

You will also have the opportunity to stick point losses to opponents to accelerate their downfall.

If you land on spaces where you are soothed by philosopher wisdom, you will recover some points for yourself.

Try to survive the onslaught and emerge the winner, the one least beaten down by life.

Roll the die and move in a zig-zag pattern as laid out on the board. When you land on a Life Stage space, draw a card from the designated deck and read aloud.

Deduct the number of points indicated on the card. If the card is also a “Redirect” card (denoted with an “R”), you may give it to the player you believe it’s applicable to (or more suited for).

That player then must take the hit. Point deduction can vary depending on the card.

If you land on a Common Misery space, it’s time to attack.

Draw a card, read aloud, then multiply the point loss associated with the card by the number you rolled and spread out the point deduction pain among two or more opponents, or hand all of the damage to a single player if you want to be particularly nasty.

If you land on a Philosophy space, you will gain a temporary respite from your downhill slide and add points to your own score.

The number of regained points depends on your decision: You may elect to recover the last point deduction that you had on your running total, or you can roll the die to determine the number of points to add back. (For example, roll a 5, add back 5.) Declare your choice. Then, draw a card, read aloud and add the points resulting from your choice.

The game concludes when all players exit the last stage. An exact roll to enter the last space is not necessary.

If you are still rolling, you may continue to cause point losses for anyone who has finished. Anyone who drops to zero during the course of the game is eliminated.

The player with the highest remaining number is the “winner.”

Common Misery cards describe shared experiences and phenomena for most people regardless of what stage they are in their lives.

Philosophy cards attempt to help you rise above the realities and events that relentlessly chip away at your existence and diminish society as a whole.

Life Stage card sets include Childhood, Teenage Years, Early Adult, Settling Down, Middle Age, Getting Up There, and Old.

There are 330 cards in total with occasional mild profanity in the Life Stage card sets.

Why You Should Consider This Game

HOBBES can be uproarious for you and your friends, but on the serious side, the philosophical element can be helpful to everyone to reflect on some words of wisdom to deal with life’s realities.

The game is ideal for dinner parties or other group gatherings of friends and family. Alcohol, naturally, enhances the playing experience.

The game is unique. If you want to try a different adult party game, consider HOBBES.