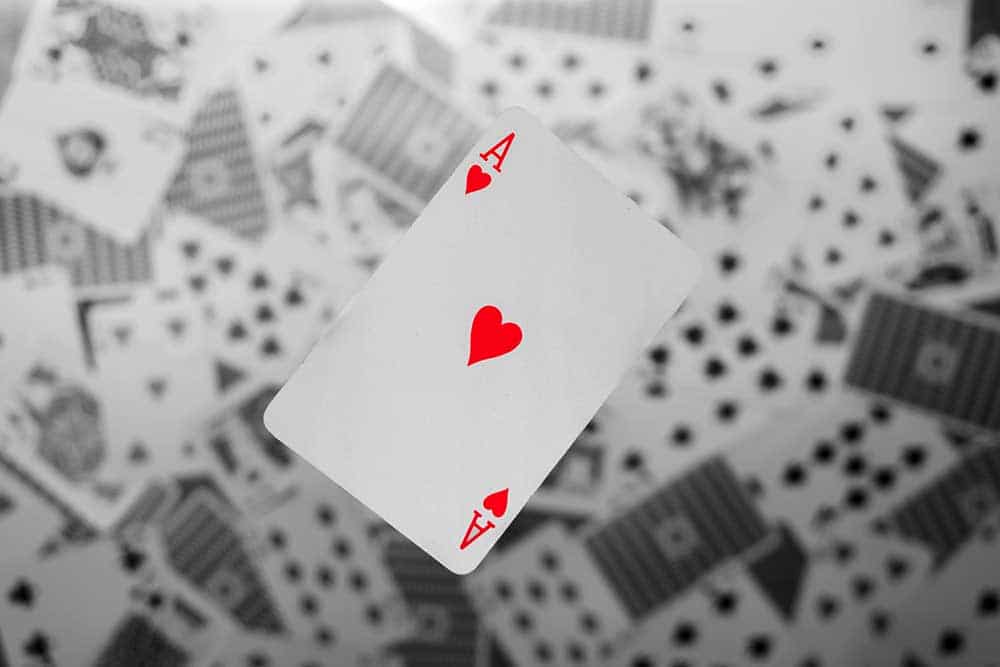 Hearts is a popular and easy to learn card game for, ideally, four players.

All you need to play is a place to comfortably sit four people, a deck of cards, and a method of keeping score.

Start the game by shuffling and dealing the deck out evenly so that each player receives 13 cards.

How to Play Hearts: Basic Rules

Each “round” of the game is played over 13 “hands” and each player plays one card per hand.

The most fundamental rule to understand about Hearts is that each player must follow suit (i.e. if a spade was the first card played, you must play a spade from your cards if you have one).

If you cannot follow suit because you do not have any cards of the suit that’s been played, then you are free to play any other card.

Hands are taken by the highest value card of the original suit played, with Aces being the highest over Kings, Queens, Jacks, 10’s, 9’s, 8’s and so on, then whomever has taken that hand plays the first card of the next hand.

The Two of Clubs is always the first card to be played in any round, and then play continues clockwise from that player.

There can be no Hearts played on the first hand, nor the Queen of Spades.

After cards have been dealt and before the Two of Clubs is played, each player selects and passes three cards to an opponent.

Players do not pass any cards on the fourth round and play with the cards they’ve been dealt.

Start the passing cycle over again on the fifth round onwards.

Here’s a quick video summary on how to play hearts.

The premise of Hearts is much the same as golf (one of our favorite two player card games); you want to be the player with the lowest score.

At the end of each round, players total up how many points they’ve received.

Each Heart is worth one point, and the Queen of Spades is worth thirteen points. There will be a total of 26 points in each round.

If and when a player takes all of the points available in a round – they’ve taken the Queen of Spades and each Heart in play – the scoring changes.

The player who has taken all of the points receives none and each other player takes 26 points. This is referred to as “shooting the moon” or to “shoot the moon.”

Once you learn the basic rules of how to play hearts, you’ll want to develop some simple strategies to help you win, and make the game even more enjoyable.

Here are some tips to keep in mind when playing hearts:

When passing cards before play begins, attempt to remove any problem cards.

These may be high value cards from any suit, but pay particular attention to the Spades suit, as you do not want to be surprised with 13 points when you are forced to play your King of Spades and have your opponent lay the Queen of Spades immediately afterwards.

Also bear in mind that your opponents are trying to do the same thing, so try not to leave yourself vulnerable with lone high value cards.

Alternatively, when passing cards, you can attempt to remove an entire suit to give yourself the freedom from following suit.

For example, if you remove all of the Diamond suited cards before play begins, you will be free to play problematic Aces & Kings or even Hearts onto your unsuspecting opponents when they play Diamonds.

To play conservatively when you have control over which suit will be played, lay down low value cards that have a low chance of drawing you any points – a Two, Three, or Four of each suit should not get you many points in a hand.

To play aggressively and retain control over which suit will be played, lead with higher value cards that should not get you many points.

On the average, each player will have 3 cards of each suit, so in the first couple hands of Clubs or Diamonds, you can lead with Aces or Kings and be reasonably sure of not gaining any points while maintaining control of which suit is played.

Again, this is just a tip, each hand & round is completely at random.

5.  Smoke Out the Queens

To create pressure on the Queen of Spades, as it is the most problematic card each round, coerce your opponents’ next move by gaining the lead and playing “safe” Spades, which is anything from the Jack on down.

If you find yourself with four or five Spades without the Queen of Spades at the beginning of the game, you can often put your opponents into a difficult spot and force them to gain points.

This is known as “smoking out the Queen.”

Lastly, remember to have fun!

Hearts is great with family and friends, and once you’ve played a few rounds it becomes easy to play with conversation, drinks, or even at parties.