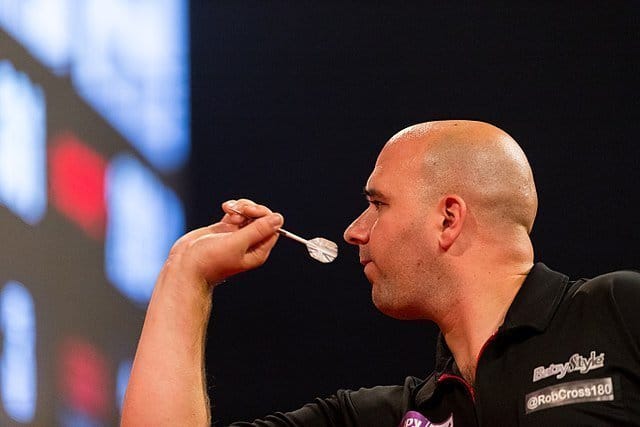 To the untrained eye, the world of darts is simply a bunch of men with varying waistbands aiming to hit a very specific part of the board.

Look closer, however, and the variations in their throwing techniques become clear.

Admittedly, every player uses a basic technique as the foundation of their own personal style.

Firstly, successful players will always ensure that their eyes, shoulder, elbow and wrist are all in line to minimize any mechanical failure that can come from the release of the dart.

The best players will also snap their wrist forward upon release of the dart in order to accelerate it. That acceleration ensures a more controlled release.

Variations on a theme

While the debate as to whether or not darts is a ‘real sport’ will not die, the era of Premier League Darts’ sponsorship deals with companies (like 888 Sport) that provide darts sportsbooks has undoubtedly heightened the pressure on players to find a unique style, and one that works consistently.

His signature move is to hold the barrel with the tips of his thumb and middle finger whilst resting it on his index finger.

It’s a simplistic style that has not only seen him rise to the top, but also become a consistent favorite on sportsbooks that use history and form to project tournament winners.

Ultimately then, van Gerwen is perhaps the standout example in modern times, of how a successful personal technique can see players given favor within industries closely linked to Darts.

Specifically, this can translate to increased product endorsements and a greater range of ways to back them (especially on sites like 888 Sport).

A notable example of this is when he faced Raymond van Barneveld in the 2012 Grand Slam of Darts finals, he was a popular draw to not only be the match winner, but also win by a set handicap, or a specific scoreline.

When Taylor was beaten by an odd grip

Prior to his retirement in 2018 after a 28-year career, the evergreen Phil ‘The Power’ Taylor championed a classical and simple style.

Anyone attempting to emulate it would hold the dart like a pencil with a relatively thin barrel, bringing their arm up still, before keeping any movements to a minimum prior to the drawback.

Of course, sometimes adhering to the basics is not enough and, from time to time, underdogs will win by virtue of innovation.

A prime example of recent times is Rob Cross, who is now regarded as one of the best players in the world after he shocked ‘The Power’ 7-2 in the World Championship final.

The event also brought attention to Cross’ unusual grip, in which he would thread the barrel of the dart between his index and middle finger with his thumb resting behind. His victory illustrated firmly that personal preferences can often count for much.

It doesn’t have to be pretty

That belief is further backed by the case study of Mensur Suljovic, who has one of the most unorthodox throwing actions in darts, along with the peculiar habit of favoring double 14 as a finish.

He points his dart down while assessing the board, leans dramatically forward and has a little spring in his step in the throw.

Even more bizarrely, he thrives best when all seems lost.

For instance, the 2011 World Championships saw him face a dominant James Wade but he shocked everyone to beat the (then) world number two 4-2 in the second round to record a memorable victory.