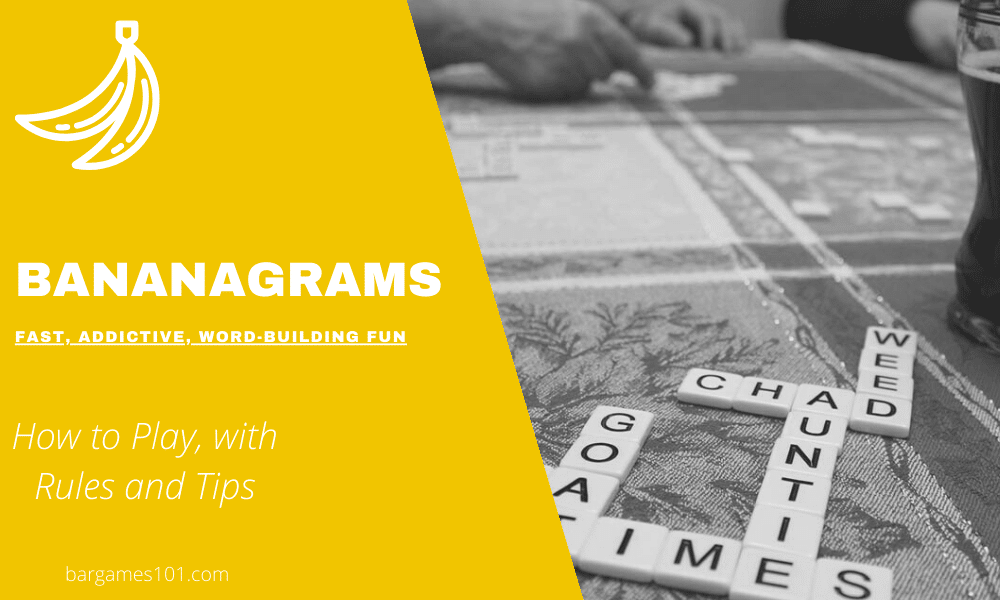 Here we’ll review the Bananagrams rules and answer some commonly asked questions about this fun, addictive and fast word-building game. We’ll also provide some info on other ways to play, with helpful tips on how to improve your skills.

Bananagrams is a word building game where players draw letters from 144 tiles and try to form words as fast as possible. The first player to use up all their tiles and shout “Bananas!” wins. Bananagrams can be played with 2 – 8 players and each game takes approximately 10 to 15 minutes.

Bananagrams was invented by the late Abe Nathanson. At the age of 79, Nathanson, a Rhode Island based graphic designer, was playing a game of Scrabble with his grandsons. According to the story, he realized it would be more fun to play an “anagrams game so fast it will drive you bananas”.

Get your yellow banana pouch and let’s go through how to play a quick game of Bananagrams.

There are 144 tiles in a Bananagrams pouch. Dump all 144 tiles out on a flat surface and make sure all tiles are face down. Depending on the number of players, you’ll need to decide how many tiles each player gets. Here are the guidelines:

Collect your tiles and wait for someone to yell “Split” to start the game. At this point everyone turns their tiles over and begins to form words into crossword-like grids.

What this means is that it’s just like laying out and connecting words in Scrabble: horizontal (left to right) or vertical (top to bottom). Unlike Scrabble, there is no board with designated points. Instead, your goal is to lay out words and build your free-form grid as fast as possible.

You can rearrange words and reconstruct your grid anytime. The key here is to try to put something together before your opponents.

When a player has one face-up tile remaining, he or she yells out “Peel!” and the other players each take an additional tile out of the letters pile (aka the “Bunch”).

You can call out “Dump” to return one of your tiles to the pile. The trade-off is that you must now pick up three more tiles to continue play.

How to Win Bananagrams

The winner is the first player to form words with all their tiles in a connected grid and call out the word “Bananas!”

Note: A player can only call out “Bananas” once the tile bunch is reduced to fewer tiles than the number of players.

After a player has claimed a victory, it’s time to inspect their grid and look for any of the following unacceptable words (more on this below):

If a mistake is spotted, call out “Rotten Bananas!” and the offending player is then out of the game. Return his or her tiles to the bunch pile, facedown, and resume playing.

What is an Unacceptable Word in Bananagrams?

Sometimes this is plain obvious. But just so there’s no confusion,  it helps to lay out some specific rules.

One way is to decide on a standard dictionary (i.e. Mirriam-Webster) as your governing word reference before the game. Or, if you have a Scrabble dictionary lying around, you can use this as an expanded game-friendly word reference.

Even better, just plug the questionable word into this free tool and check to see if it’s in the Scrabble dictionary.

In general, you can’t use any words that require a capital letter, and no abbreviations. Also, you may or may not want to allow foreign words. One common way to play, if playing an English version of Bananagrams, is to only allow a foreign word if it is also found in an English dictionary.

What’s in the Pouch?

We mentioned that a pouch contains 144 letter tiles. But it’s helpful to know how many of each letter the pouch contains, so here’s a breakdown of the letter distribution:

Can you play Bananagrams by yourself?

Of course! While it’s a fun game to play with 2 to 8 players, you can definitely practice your word smithery and kill some time by playing a game on your own. One fun way to play is the Bananagrams solitaire version, where you play with 21 tiles and try to beat your own time.

Keep the tiles face down and try to replicate a real game as much as possible.

How to Play Bananagrams: Tips for Success

Other than being fast and creative with your word skills, here are a few strategic tips that can level up your Bananagrams gamesmanship.

First, remember that the grid is flexible during game play. Meaning, you don’t need to get too fixated on your current grid. If it isn’t working, you can rearrange things to make it better and start fresh during the game. Everyone works on their grid at their own pace; there are no turns in this game.

On that note, keep an eye on your opponents’ grids. Are they moving along quickly or are they struggling to build their grid? Knowing how your competitors are doing will help with your own pacing.

Also, try to use those tricky letters as soon as possible. Get them out of the way so can build words quickly.

For example,  let’s say you have a  “Q” in your bunch. If you add the letter “I” you have the 2-letter word “QI” or: “the circulating life energy that in Chinese philosophy is thought to be inherent in all things.” (Source)

Which brings forth the next point: learn the weird and obscure 2 and 3 letter words. This can be a game changer.

You can also play lots of Scrabble for practice, as this will only increase your word game vocabulary, grid building skills and speed.

And as we already mentioned, play some games by yourself. So, when you have your friends over for the weekly bananagrams game night, you’ll come out guns blazing.

Other ways to play Bananagrams

You can try to mix things up with fun game variations suggested by the makers of Bananagrams. Here’s one I like:

No peeling or dumping. I actually prefer this way to play. It’s less hectic and still plenty challenging.

Is Bananagrams a bar game?

Bananagrams is clearly a great game for families. In fact, it’s recommended for ages 7 to 107!

But is it also a bar game? Since that’s what this site is all about, we have to ask. And the answer is a definite yes. We even feature Bananagrams in our list of the best bar games.

In fact, this game works well in pretty much any venue.

You can lay out the tiles and play a couple quick games over a round of drinks. Play in the park – play while travelling – play at work. You get the idea.

They even recommend playing the “Cafe” style of Bananagrams by drawing from the pouch instead of dumping the tiles out on the table. No dumping in this version, just peeling.

The Bananagrams company is still based on Allens Ave in Providence, Rhode Island and run by the Nathanson family. They sell millions of games a year and have won several industry awards.

The game is a proven winner. It’s a great way to get your kids engaged in a game that doesn’t require a phone or iPad. And adults can’t get enough of this game either. It’s simple, yet challenging. Fast and very addictive.

If you haven’t played yet, pick up a set here and try it out.