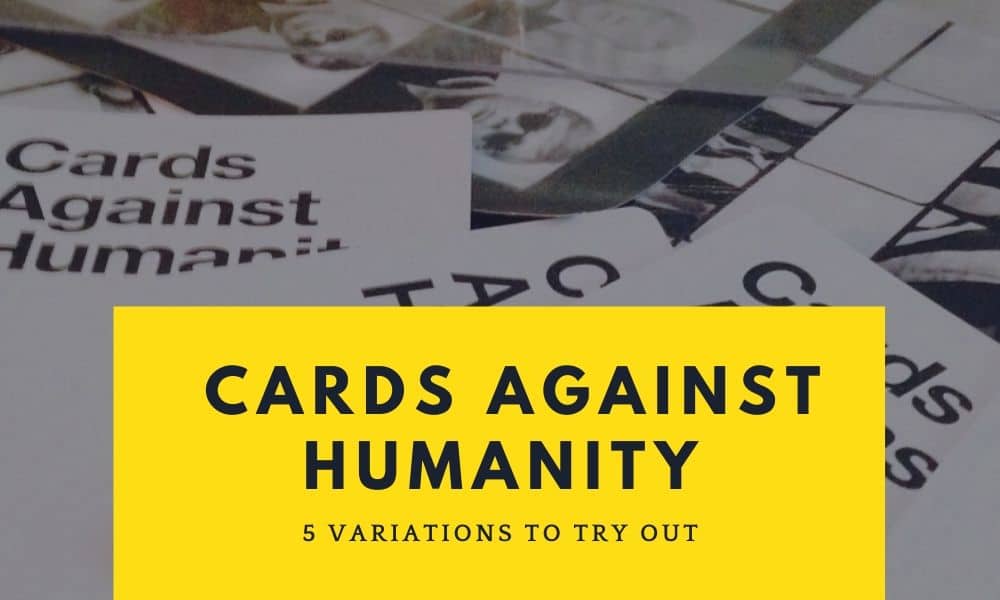 Cards against Humanity, lovingly shortened to “CAH,” is one of the best-known card games in the current marketplace.

Over the years, this game has reached a critical point in its popularity, attracting the attention of people all around the world. Why? Because CAH is nothing like any other card game you’ve played before.

While we’ve all played things like Apples to Apples in the past, Cards Against Humanity takes random situations and creativity to a new, darker level.

With this game, you don’t just put ideas together to create hilarious outcomes; you actively strive to be the worst possible version of yourself. What could be more fun than that?

However, even with countless expansion packs to choose from, there’s only so long that you can play Cards Against Humanity before the actual game begins losing some of its flavor.

At the same time, if you love the appeal of the CAH format, but you want to play it with your children, then you’re out of luck with the traditional title.

That’s why many companies have begun to produce Cards Against Humanity variations which are designed to appeal to specific niche audiences.

These games have the same underlying feel as CAH. However there are small differences that separate the titles from their parent game. 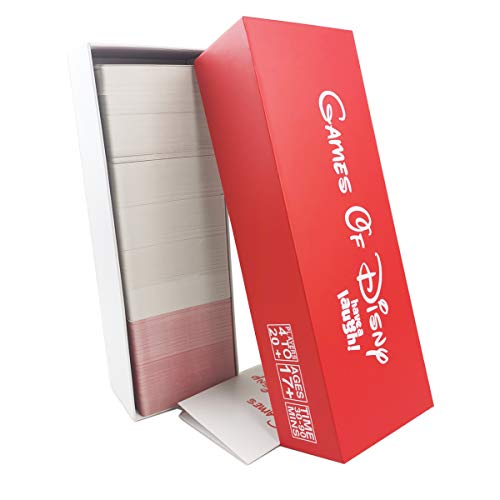 Clearly, Games against Disney is a Cards Against Humanity variation designed to bring two things together: your love for CAH, and your passion for Disney.

Designed by the Have a Laugh! brand, this game comes in a very similar box to the big black box from Cards Against Humanity. There is a combination of 568 white cards and 260 red cards in the box.

Like with CAH, you can have as many players as you like in a round of Games Against Disney – making it an excellent option for house parties.

However, it’s worth noting that despite its child-friendly topic, the game itself is not suitable for anyone under the age of 17. This game is designed to follow the uncomfortable and often embarrassing experiences that you get with Cards Against Humanity. That means that you should probably avoid playing it with parents, coworkers, or your boss.

If you don’t mind having your childhood destroyed by a game that forces you to think about Disney in a way that you’ve never considered before – then definitely give this title a try. The good news is because the game follows the same rule as CAH, it’s very easy to pick up. 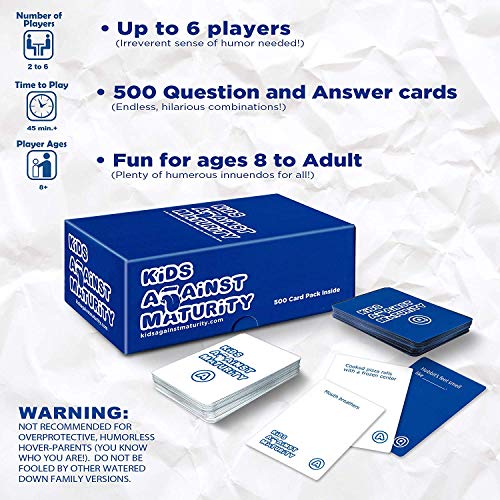 Finally, a version of Cards Against Humanity that you can play with your kids!

If you loved the adults-only version of this game, but you want something that you can use to keep the kids entertained on rainy days too, then this is the product for you.

Unlike many other Cards Against Humanity variants on the market, Kids Against Maturity is specifically designed for younger players. The humor is still incredible, but it’s designed for players of all ages, so parents and children can play comfortably together.

Like Cards Against Disney above, the Kids Against Maturity game looks a lot like Cards Against Humanity at first glance. It comes in a blue box with a picture of a stick family on the bottom, so you’re sure not to get this deck and your CAH box mixed up.

However, the game mechanics are still very much the same. Each player receives ten white cards and takes turns answering the blue question cards. Each round, the person asking the question selects the funniest answer to be the winner.

Keep in mind, while this game is great for kids, it might not be ideal for parents who aren’t a big fan of potty jokes and flatulence humor. You need to have some patience for very low levels of maturity if you want to enjoy this game.

But if you’re tired of playing the same old card game, and you want to introduce your youngsters to the same kind of fun that you get when you’re playing CAH, then this could be the perfect purchase. 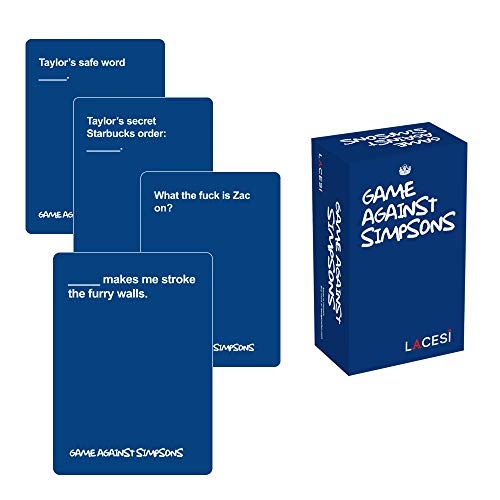 The Games Against Simpsons boxset, produced by the Party Games brand, is similar to the Games against Disney product that we discussed above.

Once again, the manufacturers of this title have chosen a specific niche of CAH lovers to tailor their game to. That means that if you buy this item, you’re going to get an experience that’s just like Cards Against Humanity but focused specifically on the wonderful world of the Simpsons and its characters.

Again, the idea behind this game was to give CAH players more freedom to focus on their favorite characters during their Cards Against Humanity games.

If you always wished that CAH had its own Simpson’s expansion pack, then you don’t need to look any further for the perfect Cards Against Humanity variation. The Simpsons “Eat my Shorts” box comes with 600 cards in total, split into black central cards, and white answer cards.

The fun thing about this CAH variation is that the rules have been customized to suit Simpsons lovers too.

For instance, the game starts with the player that can do the best impression of Homer Simpson. Additionally, the player leading each round is referred to as “King Homer”. In each round, just like with Cards Against Humanity,

King Homer will choose the card combination that he considers to be the funniest.

One warning, even if your kids are already big fans of the Simpsons, they won’t be able to play this game with you. This another strictly adults-only title.

Cards Against Humanity Variations #4: The One with All the Cards 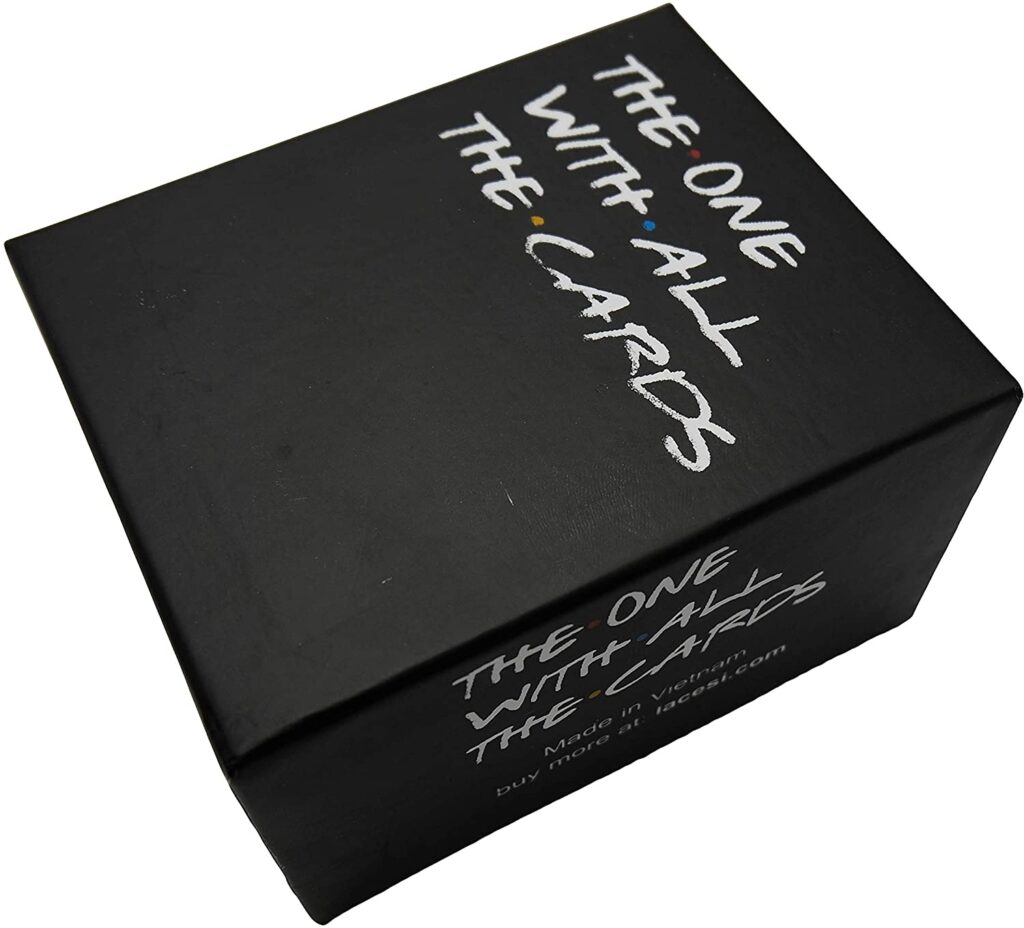 At first glance, The One with All the Cards looks as though it could be just a Friends-based cards game. The box comes with the iconic Friends font on top of it, and the game itself is packed full of Friends-focused situations.

There are plenty of references to all of your favorite characters too, from Joey and Ross to Rachel and Phoebe. However, on closer inspection, you’ll discover that this game is a lot closer to Cards Against Humanity than you thought.

Another title designed specifically for adults to play with friends, this is an original Cards Against Humanity variation carefully curated for lovers of the show “Friends”.

If you’ve got someone in your life who can quote every line from some of the most popular episode, then this is likely to be the perfect gift for them.

Although ‘The One with All the Cards’ won’t exactly go down well at your next family gathering, it’s a fun way to spend the time if you’re bored of your generic CAH experience.

Keep in mind that this particular box only comes with 180 white cards and 88 grey cards however – so it’s not nearly as expansive as the Cards Against Humanity alternatives that we’ve covered above. 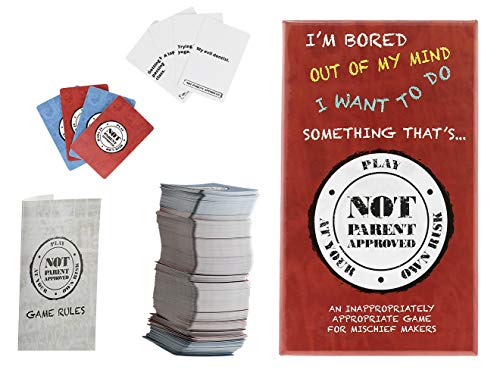 Finally, we come to another Cards Against Humanity variant picked for its versatility. Unlike many of the other CAH alternatives on the market, Not Parent Approved is actually a very kid-friendly game.

It’s the winner of the Scholastic Gold Star Award, and some reviewers even say that the game has helped with improving their kids’ reading skills. That’s a benefit that you certainly wouldn’t get with many other kids games today.

The Not Parent Approved title comes with expansion packs available, just like the traditional CAH. However, these options are sold separately. Unlike CAH, this is a title that you can really enjoy with the whole family.

The rules are easy to follow, with the same “pick the funniest card” methodology that you’ve come to know and love.

Additionally, there are 455 cards included in this kit in total, which gives the product plenty of replayability.

If you’re looking for something hilarious and unique to play with tweens and teens, then Not Parent Approved has you covered as a fun-for-all Cards Against Humanity alternative. 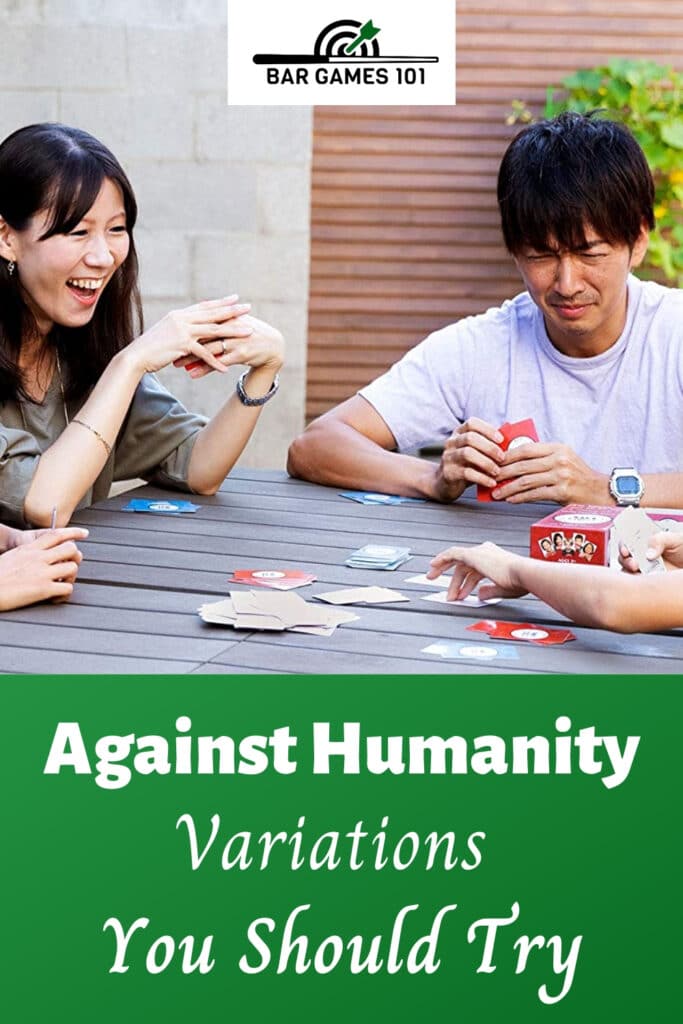 Which Option Will You Try?

The popularity of Cards Against Humanity has sparked an explosion in the marketplace. Companies everywhere are racing to get their hands on a portion of this rapidly growing market (just take a look at this list of adult card games).

We have no doubt that the number of Cards Against Humanity variations available to choose from will only continue to grow in the months and years ahead, as players look for even more cards to explore.

In the meantime, the five options above are sure to give you plenty of options to choose from when you want a CAH alternative to appeal to the different people in your life.