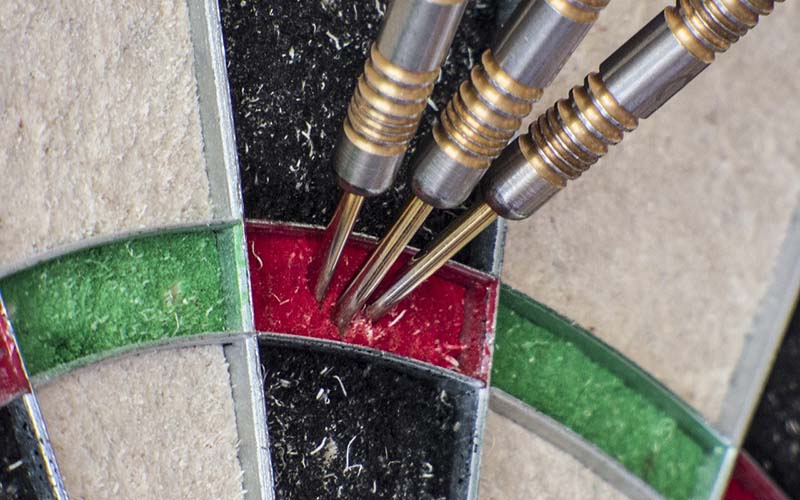 These are the dart rules that apply to any game.

But there are certain dart rules that apply to all dart games.

That’s right, no matter what game you’re playing – whether it’s Cricket, an 01 game, or Shanghai – the following 13 dart rules should be followed:

Every player gets three darts per turn.

Rule #2 – Remove Your Own Darts

Each player should always remove his or her darts from the board after each turn. But only remove your darts after determining points (See Rule 6).

Rule #3 – Fallen Darts Are Out of Play

If a dart bounces or falls off the board, it is out of play. It cannot be thrown again. Same goes for a dart that sticks into another dart.

Note: If you are playing on an electronic dartboard, the dart may still register on the board even if it falls or bounces off. This is because bounce outs are much more common with soft tipped darts.

If you accidentally drop a dart and it wasn’t a “misthrow”, you can still pick it up and throw it again.

Rule #5 – Stand on the Throwing Line

Do not stand beyond the throwing line.

A standard throwing line is 7 feet and 9.5 inches from the board. This should be clearly marked.

No part of your feet should extend beyond this line when throwing.

>>Check out how to improve your dart throwing stance.

Do not remove the darts from the board until you have recorded your score for that turn.

Players often make the mistake of immediately pulling their darts from the board and then marking the scoreboard.

Rule #7 – Do Not Touch Darts Until After Your Turn

You may leave the throwing line to check your dart’s location on the board, but DO NOT touch the dart until the end of your three dart turn.

Opposing players should shake hands before and after each game. Darts is an established game with a long tradition of good sportsmanship.

Basic sportsmanship should be observed even in casual bar matches.

Related: Read our full overview of how to play darts

Always determine who goes first before starting your match.

The classic way to do this is to have each player, or one player from each team, throw one dart at the bullseye. The player closest to the cork goes first. He or she can choose the game to be played.

If closest to the bulls is too close to call, remove the darts and throw again.

Making this determination is important, as going first is a big advantage in most dart games.

Determine the player order in games with 3 or more players. This can be decided at random, alphabetically, or by splashing.

Splashing is when a player takes two darts and throws them at the same time.

Sometimes players do this with their opposite throwing arm. Total the scores of the two darts from each player and determine the player order from highest to lowest.

Rule #11 – Do Not Distract as the Scorekeeper

If a non-player is keeping score, he or she must remain silent and not distract a player during their turn. The scorekeeper should verify each score before the darts are pulled from the board.

There should be no one within 2 feet of the player throwing. And no one should be even close to the area between the throwing line and the dart board.

For example, if you double out with your first dart in an 01 game, or close out bulls on your first toss while ahead on points to win Cricket, do not throw your remaining darts.

No matter what game you decide to play at the bar, the above set set of dart rules will apply.

If you need a complete reference for dart rules, please check out the Official Rules of Play from the National Darts Association.